Blore it is.. alas trip came to an end…3

Couldn’t sleep much and so was up by 7… lolled abt in the bed and finally got off.. showered and had breakfast and that was when vincent sms’d asking if we can meet for lunch or coffee n i said lunch, so he said,ok and that rajesh(don,the guy i met in chennai) mite also come…around 11, I was off with lalli to drop her off at DH and then roam around a bit till it was time to head to Forum, I had said ok for this place cos I’ve not been there and wanted to chk it out.. I picked up 2T’s,1 for preeti n other for me with a tiny paw print in front and a bit bigger one on back..kinda cute.. preeti’s is black n mine is Grey.. So I got to FORUM at 1, and was looking around the stores- Westside,archies,landmark and LUSH(amazing store,it’s a store from UK, that has all organic soaps,body wash,shampoos,massaging soaps,etc and the entire store smelled divine,,,yummmmmy, but it was too pricey,so looked around and got out) and by then vince called asking where I was…and we met up, more chit chat as we waited for 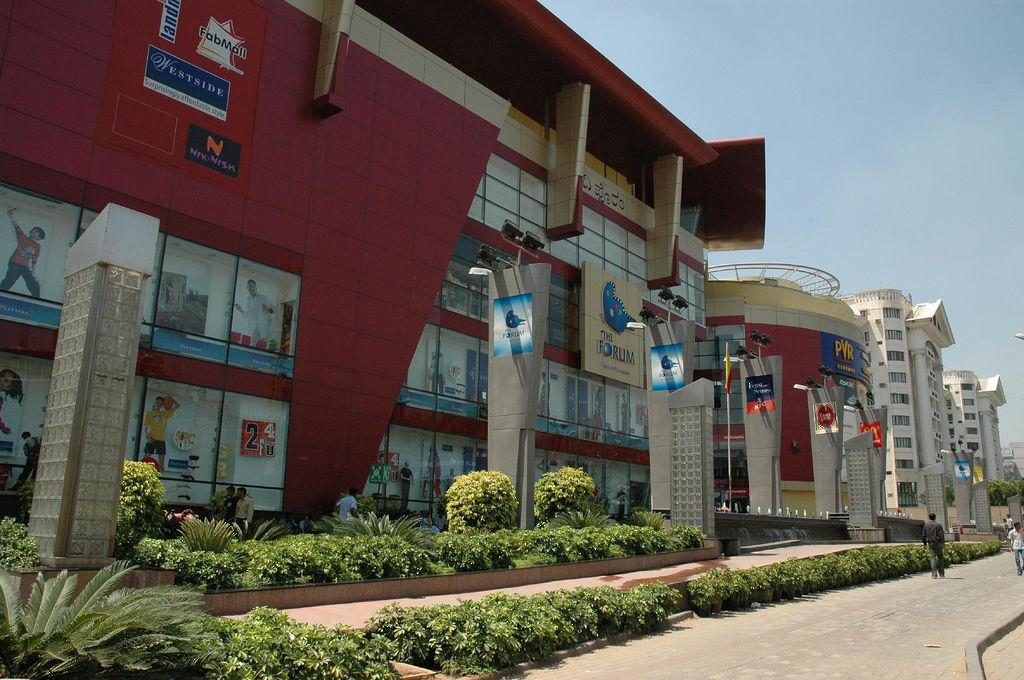 Rajesh to reach, apparently he hadn’t been to Forum before either…Vince said it was a good thing, cos otherwise his wife would have emptied his pockets..hehehe… We then went up to the Foodcourt and I chose Mexican,and we had Quesedilla, and the guys had Tacos n lemonade,that tasted like some concentrate and nothing like lemonade. 😉 This is when things got interesting,, Vince mentioned that Anu was in town and then she called in a bit saying her conference was over and wen she heard I was there, she started screaming saying “I wanna meet u all,i don’t want to spend another min here”..hehehe.. then she asked if we could pick her up then called again saying she will come on her own.. since it will take her an hour n vince had some work, he said we could go to his office n wait.,his office was jus across the st from the other entrance on Forum, nice place… Me,rajesh(don) n him were there till anu got to forum..vince called her wen it was nearly an hour and madame said she was in a green saree and was in Forum basement in a car… So Don n I scooted over to Forum, where we found her in Landmark, Don had some work to finish,press release, so he went to do that and we did more window shopping there.. I bot some earrings for Preeti at Nik Nash,madame wanted stuff from there.. And vince called saying he was done with work,and will pick us up outside Forum, we walked out,and waited for him in front of an Apt complex next to Forum,that apt was SOO HUGEE , I liked it but instant dislike the min I saw a NO PETS ALLOWED sign… yuck!! Wat kinda place was it… From there,we headed to MG Road n decided to explore some while Vince finished his meeting, so off we went to Brigade road,n decided to go sit in barista.. had a coffee there n Anu called saroja asking her to come meet us, she also wanted to buy a salwar n change but by the time we could do that Saroja n rajesh got there n vince was also done with meeting. CHAOS CHAOS everywhere..hehehe… so we all huddled into Vince’s car n drove around a bit n finally went to 100ft –Boutique hotel on 100ft road,near aunt’s house in Indra nagar… The whole eve since we met Anu was spent ragging her non stop ,..hehehe..the poor thing kept screaming and she kept pinching, slapping vince n later I got some too… ouch ouch, it hurt… kept calling her teacheramma.. 😉 There we ordered some drinks – fresh lime salt, ginger ale, sweet lime n brochettes since Vince said he was going for sugar test n had to fast for 12hrs n Don had to go home n make up for missed lunch n dinner n we dint want anything heavy… so we ate that n it was nearly 9.15 n anu was getting jittery… so we said, aiyo pavam, poor thing, and headed to the airport, dropped her off n I got back home…. phew, what a day it was….

Last day of my stay..L woke up feeling beyond hungry thanks to no dinner, and so showered and had an early lunch with bua n uncle at 10.30.. packed and got everything ready.. then went with bua to a sale held by her parlor lady..and then back home, had T n headed to the station.. too much traffic n gramma was ready to freak out… but anyways, train was in 1st platform n so we dint have to walk a lot.. and now back home…. Phew… am tired…. After all this writing, thinking, racking my brains to fig out wat I did over the week…. 😉