A week in Cool city

It had been a while since I traveled and using my friend’s weddings as an excuse I decided to spend some time before and after in Blore.. I knew it would be a fun trip cos normally when I go there, I have a lot of fun and enjoy myself and am away from home, so no hassles for a couple of days.. It doesn’t mean I don’t miss home, I do, soo much.. keep sms’in mom and talk to granparents whenever I can or they will call to find out how I am doing and ask me if I really need to stay on for so long and not return right after the weddings… J

I left chennai on 3rd Dec, woke up nice and early at 5,and was off to the station by 6.30am by an auto.. Hopped into the train and waited for the journey to begin.. Its always frustrating while going somewhere cos we keep wishing the journey wouldn’t be so long and while returning it seems like we came back too soon.. wonder why??

Anyways, the train was on time, give or take a couple of mins, reached Blore Cant at 1pm,much ahead of the scheduled time, and I dragged my suitcase, with its wheels wobbling and whining at the uneven flooring in the platform and lugged my bag and made my way to the city that always makes me smile and look fwd, primarily bcos of its cool weather… After haggling with an autowala and finally hailing one that would come for a fair price, I looked fwd to heading home and begin my vacation… Got home,and was welcomed by aunt ,granma anc Rajan who were full of smiles and said they had been waiting for me.. hehehehe… guess they dint know wat was in store for them 😉

After having lunch and informing those at home that I have reached safely, my cousin Lalli told me that she was gonna go meet her best friend for coffee at Brigade Road, hmmm, this gave me an idea and I said I shall tag along with her and do my own thing till she is done catching up with her friend.. Around 3.30,we finally freshened up and got out and headed to Brigades and were met by Raji,her friend.. So I told them to give me a buzz when they were done and we can head back home.. I loitered about the road, looking at some of the stuff on sale on the roadside stalls, picked up some earrings for myself and Preeti, bot a chain with a red pendant for her and did more window shopping.. That was when Anita called n i chit chatted with her and vids (who was in hydie then) and decided that I would pick up the gift voucher for our friend(s). and that’s when I went to this awesome book store called The Bookworm that stocked a lot of classics and old books… Very nice store.. .

After abt 2hrs of walking, I sms’d lalli asking her whereabts n went over to the Coffee day across Brigade road n met her n her pal Raji,who was lot of fun and we yapped a bit till we realised it was way past 5.30 which was the deadline given to us cos that day was Karthigai function and we had to be home.. so walked a bit,found a ric and got home..

Athai got lalli to wear a saree and we lit the lamps n had pori balls n appam.. meanwhile,vidya(my cousin) had called saying “aarti is in town, then we are coming over”.. so she,shanth and shruti came over and spent couple of hrs there, had dinner and then went back home.. always good catching up with her n shanth.. Their daughter is so cute and so adorable.. and wants everything to be in its place and yells out to her mom n dad if something isn’t right…hehehe.. was so cute to see Shanth obeyin everything she had to say… 😉

Dint do anything else that day.. jus killed remaining time at home,and dozed off by 11 or so..
Day 2

It was Monday, lalli was getting geared up for her 1st day at DH, and I went along with her, dropped her off and got the car to drop me off near Lifestyle.. Killed about an hour or so there, bot gift voucher for Meenal and a chain-earring set for Mehta and headed to Commercial st.. this is yet another area that is covered with stores and more stores and lanes and by lanes filled with tiny stores… Did some shopping here, bot myself a salwar set and 2pairs of casual footwear for preeti, went to KFC n had a burger (1st time visit to a KFC) 😉

And then got back to MG road, went to Gangarams (love this book store), browsed abt a bit, had decided that I wasn’t gonna buy any books unless they were really worth cos I got no place at home to store em, and so did more of browsing through and hunted abt for a book.. Explored their 1st floor stationary section, and picked up some postcards and bookmarks, that were kinda cute… hunted down the post office to send out the cards to ppl I was missing a LOT and got back home.. Saroja had called earlier saying lets catch up, but since it was nearly 5.30 n I had been out walking since 11, I got back home.. She called around 7 n asked if we could catch up for dinner, said ok… so, got ready, freshened up and made my way to her office, which is abt 10mins from aunt’s house on MG road, in a building called Prestige Meridian..

She works as a HR consultant at Watson wyatt worldwide, after couple of mins,came down, said hi,hugss and we walked down to Blore Central cos it was early for dinner.. Looked around, I dint buy anything,that place is beyond expensive.. She picked out a shirt and then realised her helmet n jacket were in office, so we walked back to her office, said hi to her colleague, and picked up all her stuff and started walking towards Garuda mall,which is abt 15mins walk from her office,jus around the corner from Central.. she got a couple of calls n by then we had reached Garuda, hopped on the escalator n reached the 1st floor n madame suddenly realised the Central bag with her shirt was missing.. Shit..we dint know where it had fallen off, so trotted all the way back to upto nearly her office looking for it, but NO LUCK … we were pretty disturbed but she insisted that we go to Garuda n grab dinner, maybe the shirt wasn’t meant to be hers she said… 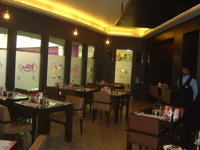 Sigh… we walked around from one escalator to other n reached 5th floor n went to Kobe, nice quaint place n had sizzlers there.. took some pics of each other, a rose on our table as we waited for food.. She had Fish sizzler n I had a Veggie sizzler… was quite good.. nice n hot.. it was nearly 10.30 by the time we left that place,and I got a ric and got home n she went back to her office, picked up her bike n went home..

Phew,what a day it was…