Shootout at Lokhandwala.. what a movie it was… 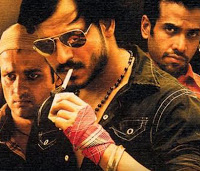 Director : Apoorva Lakhia Starring : Amitabh Bachchan, Sanjay Dutt, Suniel Shetty, Arbaaz Khan, Viveik Oberoi, Tusshar Kapoor, Rohit Roy, Shabbir Aluwalia, Aditya Lakhia, Amrita Singh, Diya Mirza, Neha Dhupia and Abhishek Bachchan (as far as I could remember) A movie I had been wanting to watch for a really long time, almost 2months finally happened today.. I had picked up the dvd from my library and decided to see it today.. had seen and heard the songs before, love the Ganpat song a lot.. A real life incident made into a movie called ‘Shootout At Lokhandwala’ has a huge starcast and is a thriller from the minute it starts to the last scene… Has you totally involved and watching every scene without blinking your eyes.. It’s a re-creation of the Lokhandwala shootout of 1991, in which underworld don Dawood Ibrahim’s henchmen were killed by cops. The first scene is in an old tattered apartment building where we see brooms and buckets of water used in cleaning dried blood and bullets in Lokhandwala . News reporter Meeta (Diya Mirza) reports that some 3000 rounds of ammunition were discharged by a large police squad at a previously peaceful residential locality. The film then moves to the office of former chief justice turned private prosecutor Dhingra (Amitabh Bachchan) where he interviews the three leading members of the Police ATS, Inspector General Shamsher Khan (Sanjay Dutt), Inspector Kaviraj Patil (Suneil Shetty) and Javed Sheikh (Arbaaz Khan). The entire movie is kinda like a flashback of what really happened being narrated by the Cops part of the ATS team, who were involved in the shootout.Starts with how Inspector Abhishek (played by yours truly Abhishek bachchan) was killed by the underworld and goes on till the chase is complete and Mumbai is rid of the biggest gang ever…. The story is of the seasoned dedicated driven Khan, who with this team of handpicked cops like Inspector Kaviraj and Javed engaged in bringing down the gangsters in a residential locality of Mumbai and says they have made Mumbai a better city to live in. The gangsters being Maya (Absolutely phenomenal performance by Vivek oberoi), and his highly skilled partner, Buva (Tusshar kapoor who’s fitted into this character very well) who are cold-blooded killers, who wouldn’t give up without a fight and the only person they answer to this Bhai who controls their activities from Dubai, who towards the end is the reason for their death.Thus begins a dangerous cat-and-mouse game where neither side shows any overt aggression but tries to disable the adversary by tactical maneuver. Khan launches “visits” to the criminals’ families to try and “persuade” them to counsel the criminals to surrender. In turn, Maya and his men return the “visit” by approaching the cops at social situations. Maya visits Khan at a restaurant where Khan is having a eat out with his family. Maya quietly tells Khan: “This is between your men and mine. Leave the families out of it.”

The constantly-charged adrenaline-driven narrative moves across gullies and roads with a ricocheting effect. The ear-splitting soundtrack reverberates with sounds of guns and ganas. The item songs in the beer bar are a rude reminder of how much the original true-life material needed to be re-worked for it to be audience-friendly.Interesting aspect of this movie is how much attention has been paid to recreating the city as it was back then, detailing of the period…the phone booths, the crumbling buildings, the smoky skyline …all reminding us that the more things change, the more they are the same. I could go on and on about each scene, but I would be spoiling it for you if you read this before watching the movie.. so go on, pick up the dvd or vcd , if ur really lucky and its still running in theaters, go run for it.. watch it.. savor every scene… get lost in lokhandwala and come out a changed person.. Mind blowing, I can only imagine what it was like in real..