I had been talking to a friend of mine about this movie and we wanted to go for the 1st day 1st show, and then forgot about it till Aug 10th , wen this friend’s mom, also a good friend of mine said that she is trying for tickets for the next day and i jumped and said i wanna come too.. crossed all fingers and toes hoping for ticket, and got it..yipeee.. we were to go on sat, Aug 11th for the 10pm show.. told her i’ll stay over at her place and get back home sunday morn..

The day wore on and it was time to leave for the theater… was excited, not cos i am a major SRK fan but jus the fact that i was gonna watch this movie, with friends…. movie started late, we were the 1st few to enter the theater, this friend Preethy stood right outside the door and got in first, hehehe,, she is a crazy SRK fan…. 🙂
Oh,and then the movie dint begin right away.. there was a surprise for us , the screen lit up, and the words “will everyone pls stand up” popped on, and we were wondering what was going on.. then came the medley of singers singing Jana Gana mana… we all promptly stood up in respect…. and then once that was over, it was straight on to the movie…

Chak De…. directed by Shimit Amin was the director’s second venture after Ab Tak Chhappan which was produced by Ram Gopal Varma.

This movie is said to be kinda ased on true story of Indian Hockey player Mir Ranjan Negi. Negi was the unfortunate goalkeeper of the Indian Hockey Team which lost 7-1 to Pakistan in Asian Games Hockey Final, back in 1982. For no fault of his, he was said to be the sole reason for the team’s lose… This movie has SRK, who plays the role of Kabir Khan, a hockey player who quits cos he was blamed and called a TRAITOR shaking hands with a Paki player after losing the match… and how he makes a come back after 7yrs and takes on the National Womens hockey team ….

The women players,chosen from states all over India, are a fun lot, including a tomboy (Chitrashi Rawat) whose father fears she will never marry who places the bundle given by her mom as a way of reserving the bed, and has a temper to match; a forward Preeti Sabarwal(Sagarika Ghatge) who reaches late for the 1st day and finally manages to hold her place in the team, whose boyfriend, a cricket superstar, wants her to quit the team and live in his shadow; a newlywed goalie and captain of the team Vidya Sharma (Vidya Malavade) whose in-laws expect her to stay at home; and a haughty, seasoned player Bindia (Shilpa Shukla) who needles the coach and tries getting her own way till she realises SRK is not so bad after all. Not to forget the Punju girl who has a mean temper, picks a fight with everyone and steals the movie, Balbir Kaur (Tanya Abrol) .. 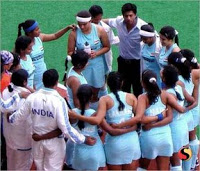 From the minute the girls meet SRK till the last goal, the movie is gripping and its almost like watching a live FIFA world cup match live.. The thrill and nail biting finish, to the unpredictable moves is amazing… Having realised that his team does not need hockey skills, but team spirit SRK goes about getting them to act as a team and the absolutely wonderfully directed scene is the one at McDonalds, the lunch hosted by SRK the day he quits the team cos the girls dont like him. When leering boys at a McDonald’s harass the girls, a girls-against-boys melee erupts, but SRK doesn’t interfere, knowing the team will prevail — and find its spirit. From there, it’s on to the women’s hockey championships in Australia winning over trillion battles, getting over personal differences and coming together as one… 🙂

The best part about the movie was it was off beat, different from the usual mushy romantic love story, no masala, no fights, no silly side track comedy scenes that make you want to scream.. the Soundtrack is pretty decent, ofcourse the title track by Sukwinder singh has us all tapping our feet, the way the song has been featured is brilliant… a very patriotic movie, that is all about INDIA, togetherness and about how anything can be accomplished if we come together.. this movie is a must watch for all..

So, go on.. have a good time… am sure you will walk out humming Chak de….. chak de india….