I had heard it, had even seen it, but not really enjoyed it… Am talking about Ratatouille(to be pronounced as Rat-a-too-eeeeee).. the movie that was released here in chennai couple of weeks back.. wanted so bad to watch it , and well, the day did come, or rather it came and went.. me and friend decided to go for the noon show at Inox and she sweetly blocked tickets on sms, oh,yes,you can do that , dont have to pay or stand in long queues, punch of buttons and voila you have your tickets, but make sure to reach the theater half hour before the show or they’ll sell it to the next sweet person in line…
anyways, this happened, got excited, but then realised that i would rather spend time wiht friends who’d come outta town than watch this movie, which i could do at a later day as well. so we cancelled the movie plans and i had a jolly good time with these friends of mine… 🙂

Days passed.. so did weeks.. and it was nearly a month , i had been working my a$$ off and wanted a break.. away from the computer… away from usual stuff, so just logged onto satyam website and saw that ticktes to the movie were available.. called my sis, asked her if she wanna come along, and she said Aye AYe,i do.. booked two tickets, took the print out and was all set for the evening…. 7pm show at 6 degrees was what i had booked for…. 🙂 went home, picked up my sis and reached satyam around 6.52, just in time… phew, movie hadnt begun yet.. i hate walking into theaters where movie’s already begun, unless its a movie i’ve seen before… 😀 So,here is what the menu for the evening for….

The main course of Ratatouille involves a French rat named Remy (Patton Oswalt is the voice) who dreams of being a chef at an elegant five star restaurant ever since he saw Chef Gusteau cook up a storm on tv and through his book “Anyone can cook” . Remy is blessed—or cursed some might say—with an exquisite sense of smell and taste. But the rat pack he hangs with has no interest in fine dining or good food… his nose comes in handy in spotting the rat poison…. the scene where he and his brother go looking for that perfect spice into a lady’s kitchen(the forbidden room for rats) and remy’s hunts for a bottle of Saffron is adorableeeee….absolutely cuteeeeeeeeeeeeee Fate lands Remy in Paris where the spirit of the late great French chef Gusteau (Brad Garrett is the voice ) guides him to Gusteau’s former restaurant.

But the restaurant, under the rule of Skinner (Ian Holm), has lost a couple of its stars and is about to be shut down. Arriving

at the restaurant at the same time as Remy is Linguini (Lou Romano) who’s desperate for any kind of work…. he is a redheaded klutz who can’t cook, gets the job of the garbage cleaner and one day while cleaning, being his usual sloppy self, an accident with the sup pot prompts him to add a couple of ingredients which totally messes its taste and luckily Remy comes by from above, literally, and goes abt making the soup the piece de resistance….This leads to Linguini being hired at the restaurant and forced to prove himself. Of course he has no clue what to do in the kitchen but Remy does so the two form an odd partnership that brings Gusteau’s restaurant renewed fame. they actually live together, and Remy makes Linguini breakfast collecting herbs et all from neighbors garden. makes you go awwwww…choo chweet

the scenes are amazing fun- watching Remy pull and prod Linguini to look for the right ingredients has us all in splits…. 🙂 The cooking sequences are a barrel of fun. And in Ratatouille, Remy tugs on some pretty painful strings. Haha haha 🙂 [see it to believe it] The characters go through the motions in all earnestness, and attention to detail is mind boggling, everything from layers of muslin to the thin slices of cucumber seem so real… And the characters, the rats are all so adorable in a warm-fuzzy way, the chefs in the kitchen prim and proper… the scenes where romance blossoms between Linguini and Colette is adorable..

and ofcourse there is the evil stark character of Anton Ego, uber-snobbish restaurant critic who is sardonic right down to his bony ankles, he sits in a 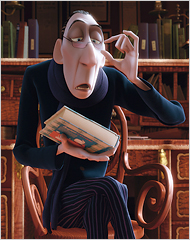 study shaped like a coffin and hammers out ruthless reviews on a typewriter.. the His words reach magnificent peak in the articulate beginnings of his all-important review, as he talks about the irrelevance of critics. It starts off completely self-deprecatory (‘The work of a critic is easy’) yet goes on to soberingly explain that the critic has a valiant need, when he does risk his neck striving for ‘the discovery and defense of the new. the scene where he tastes Remy’s Ratatouille and has a sense of deja vu is possibly the bestttt scene in the movie… simply superb…. the way the emotions have been played and scenes created leaves us in awee…..

A movie that leaves us hungry… for more.. and for some good food is what Ratatouille is all about.. watch it and enjoy….. 🙂