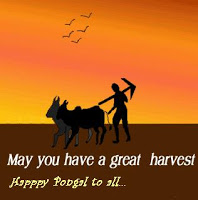 Come January, and all of us gear up for the Harvest festival of Pongal (aka Thai pongal.. Thai=tamil month, pongal=being the festive day and the food item prepared on that day)..

Pongal marks the beginning of Uttarayana, the Sun’s movement northward for a six month period. In Hinduism, Uttarayana is considered auspicious, as opposed to Dakshinaayana, or the southern movement of the sun. All important events are scheduled during this period. Pongal signals the end of the traditional farming season, giving farmers a break from their monotonous routine. The Four Days of Pongal
Pongal literally means, “boiling over”, here it is the milk+rice+jaggery that is cooked together and offered to Gods. The Tamil harvest festival is celebrated with decorated cows, processions and decorative kolams(rangoli, designs drawn on front porch using rice flour). The kolams will be elaborate and of a normal design, the sun, the pongal pot with boiling milk, and sugar cane…

Each day of this festival has a special significance, however, it is celebrated more grandly in the villages, while the city folk mainly celebrate on the second day only. It is widely celebrated in Tamil Nadu, Andhra Pradesh and Karnataka.

On, the first day, Bhogi, the old clothes and materials are thrown away and fired, marking the beginning of a new life.

The second day, the Pongal day, is celebrated by boiling fresh milk early in the morning and allowing it to boil over the vessel – a tradition that is the literal translation for Pongal (in Tamil). When the milk in the pot comes to a boil all holler “pongalo pongal” and the higher the boiling level, the better it is for the family… this is traditionally cooked in a mud pot and not pressure cooker or stainless steel vessel.. but in my home, gramma uses a pot her mom gave her during her wedding…

The third day, Mattu Pongal, is meant to offer thanks to the cows and buffaloes, as they are used to plough the lands. People with cows at home, decorate them, give them specially made pongal and take them for a ride out on the streets.. we used to have a cow at home, so enjoyoed painting its horns, getting it all decked up.. but now are happy watching cows and bulls marching about on the roads…

This is also the day when women rise early, and keep “Kanupadi”.. they lay out leaves from the Turmeric plant out in the backyard or balcony.. and have three diff kinds of rice(all of which are left over from the prev day) – the sweet pongal, the curd rice, and curd rice mixed with turmeric to give it yellow color. they then clean the leaves, keep a banana, few beetle nuts, beetle leaf and then make tiny balls of these rice and place them on the leaves.. 1st the sweet pongal, then yellow rice and finally curd rice.. it is supp to be offerings to our fore fathers to look after us.. these are left in open for crows to feast on… and for every member, there will be seperate leaves.. a fun tradition that i’ve been part of since the day i could remember…. 🙂

Jallikattu, a violent taming the bull contest, marks this day. this is the latest buzz in news as the Govt has imposed a ban on this event… its where a bull is made to run on the streets, and people chase it, get clobberd and one lucky soul will controlthe bull and earn the reward..Something that happens primarily only in villages these days…. On the last day, Kanum Pongal, people go out to picnic, to the river bed or ocean…

Even though Pongal was originally a festival for the farming community, today it is celebrated by all. Coinciding with Makara Sankranti and Lohri(which was yesterday), it is celebrated in various parts of India…..

have a wonderful day and a fabulous year ahead……..