Dad turned 60… and we had celebrated in style…

Am back.. after a brief stint of goin invisible, things have settled down and we are all back to routine… was away from net/blog for abt 5-6days… 🙂 a lot going on at home…:)

This time it was Grandpa’s health [ he had to undergo surgery] and ofcourse Dad’s 60th bday functions…
Turning sixty is a social-religious event in India especially in south.Shashtiabdapoorthi is a family event , when a ‘remarriage ‘of the couple, is performed .This unusual custom marked by rituals, reverberating with the ‘mantras ‘ is spiritually and mentally rejuvenating for a couple who are ‘graduageing’ .[Shasti’ being 60,‘Abdam‘ the year, with Poorti signifying the completion of 60 years in a man’s lifetime] 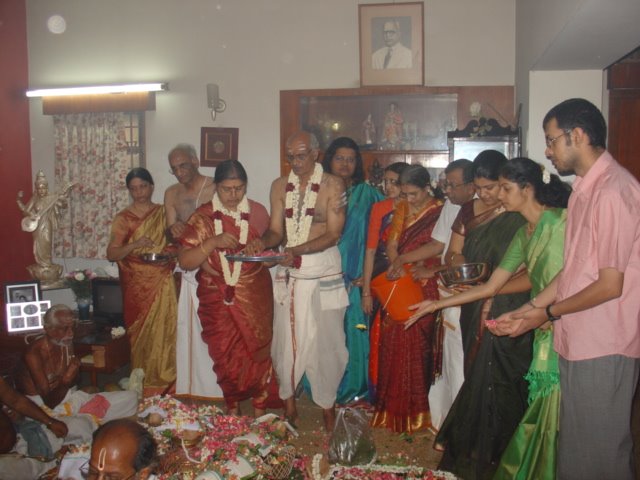 My dad’s star bday was on April 8th, which is when his function was set to happen.. the previous day was when we had the Ganapathi homam and Rudra Ekadashi … Since granpa was just back home after his surgery [ he is doing well, and on his way to normalcy], we dint invite a lot of people and decided to keep it simple… just close family was invited and the function was all set to happen at my Grandparents’ place [since granpa couldnt move around much and the house was bigger than my parents’ apartment]

Absolut chaos at home
Getting all the items ready
Shopping for groceries
Buying mom n dad gifts [ me and my sis got em mobile phones]
Arranging food
Ordering for veggies
Calling for flowers
Making arrangements for Milk[this was a killer]
and ofcourse since it was at home, had to get the rooms cleaned out, furniture moved out, and place all set to fit in abt 25-30 people.. and for the homam[puja.. havan]….

7th n 8th dawned bright and early for us. we were all up by 4 and ready by 5.. cos Priests started trinkling in by 5.15am and the function began around 5.45… it was fun… it was tiring… and it was a once in a lifetime opportunity to see your parents tie the knot all over again.. its like God had made a plan that since kids are not around during the 1st wedding [ ya, right, obviously ;o)], he created this 60th bday functions… 🙂

anyways… touch wood.. it all went off extremely well.. all were happy.. mom n dad were overjoyed that things went off smoothly.. no hiccups, no hassles, no sudden unpleasant surprises… 🙂