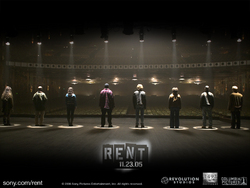 goes the song…
This is how the Movie by Chris Columbus (director of the famous Mrs Doubtfire) opens. 8 people standing on a stage singing this song. Gave me goose pimples when I heard this, don’t ask me why, but I guess it touched a chord somewhere in me.
I had heard about this movie and had listened to one track “Take me or leave me” that made me pick up the DVD and watch it.
Jonathan Larson’s Pulitzer Prize and Tony Award winning rock opera is what this movie is based on, it tell the story of what happens in the life of a group of Bohemians over a year in modern day East Village New York. How they struggle to pay their rent and their lives, which are all so different but yet so close knit and so similar. Its not just a musical where you have people singing songs and going about the movie, but this is a movie where there are scenes, silences that make you think and feel; the songs that are smoothly brought in between dialogues makes us want to reach out to those on screen and cry with them when they are sad and smile when they succeed.
The main characters of RENT are this group of 8people – Mark (Anthony Rapp) and Roger (Adam Pascal), the former an aspiring moviemaker and jilted lover, while later is a ex-druggie who loves to sing and play his guitar.

Then, there is the vivacious Mimi (Rosario Dawson) who lives in an apartment beneath their, also a druggie who falls in love with Roger and her ex-boyfriend is Benny (Taye Diggs), who was a former member of this group, but got married and is now their landlord. Oh, and there is the ever flirting, ex-girlfriend of Mark’s Maureen Johnson (Idina Menzel) who left him for not another man, but Joanna (Traci Thomas) ;o). Also part of this group is Tom Collins (Jesse L. Martin) and his new found friend cum lover Angel (Wilson Jermain Heredia), who is also HIV positive.

Over the year that follows, the group deals with love, drug addiction, break-ups, reconciliation, eviction, death, and even success at last. The songs that feature in this movie are full of life and every word has a meaning so deep, it leaves us wanting more and wishing that it dint end so soon… 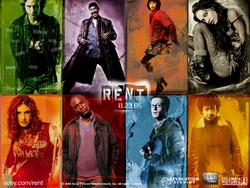 It Just goes to show how much can change or happen in a Year, which is what 525,600 minutes is equal to.

For those, who are not used to musicals, this is a good movie to start with for it has dialogues as well, and the songs are all simple, rock numbers, which are so enthralling.

The Tagline of this awesome wholesome movie is NO DAY BUT TODAY. So live each day as it were the last, enjoy every moment, speak your feelings, and enjoy LIFE…

Every single song in this movie is good.. be it.

Saw this movie ages ago[think it was 2006], but thought i shall repost this review….