Read about the Theatre Fest

And finally managed to watch the 1st 2 plays…. the rest of them i dont find too interesting, going by the titles and the subjects.. but i might catch the one on Aug 7th – The Whale 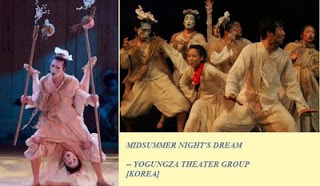 A play that was in korean, with english sub titles(yes, they displayed the sub titles on the screen] had us all absolutely engrossed and enthralled by their acting.. there were about 7-8 actors on stage, who were the actors[playing diff roles], musicians[yes, they would run quickly sit down and start playing their instruments], singers[oh,yes, and they were good] and the ones who had us all completely involved with the act.. there were 2guys, need to make specific mention cos they were simply outstanging[its them in the pic on left side].
They did all sorts of antics, and acrobats, also managed to get the crowd involved by throwing out some bangle kinda thingies[well, atleast thats what they looked like from where i was sitting, which was way upstairs…nope, dint get any, but sure enjoyed the evening]… oh, and the best part was , the actors had managed to sneak in a few dialogues in TAMIL [yep, you read it right, and they did it so well, there was no awkward pausing, starin at paper, etc.. they just spoke it.. in pure korean accent, which was damn sweet] …

vaadu manga venuma…? [this was the best of it all]

A wee bit different from the original version by Shakespeare, nonetheless as much funny, if not more, this play by the Yogongza theater group was awesomeeee!!

Anyways, reached the venue a bit early, and was in my seat by 7.20, and on the dot at 7.30 the play began, or rather the MC began his welcome address,etc etc, which took not more than 2mins i tell you…
This play had just 2 people in it.. yep, Rajit Kapur and Shernaz Patel… it was all about the letters that went between them from when they were little till one of them finally dies. The kind of bond they share thanks to these letters is damn sweet and very endearing… the way the letters reflect their lives, what they are going thru and how at times they stop because one of them is upset with the other….the love that grows between them, but which is kept away till late in their years, and what happens at the end has been beautifully narrated…
The actors  stood on either side of the stage, with a mini make shift seating arrangement, which consists of a bunch of colourful boxes, whcih they rearrange everytime there is a change in their feeling, or just to break the monotony… But i was stunned at the way they were able to keep up with the dialogues, and go on and on without a squeak or shrill in their voice… Hats off to them both!
At the end of the play, with a 10min break in between, the Rajit said this was the 1st time in 16years that they had an audience of over 1000 people… what an honor it was to have been part of that crowd!!!  it was almost like there were too many people as against the seats available, cos some where sitting on the steps and watching the play….
Well, now am looking forward to the Whale.. hopefully that should be good!!!
Oh, and they have a Contest running… 2 years back when i had gone for these plays, the contest was to write and send a review in less than 160characters on sms.. and guess what, i won the prize.. it was Rs1000 off on my Airtel mobile bill… 😀
This time we have to send in our reviews (150words) by email before 11am the next morning.. and the prize is lunch for 2 at The park.. crossing my fingers to see if i get lucky again!! 😀