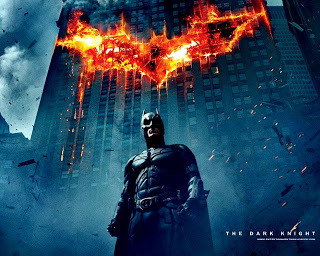 Now, these are not just words.. they are all that come to my mind when i think of The Dark Knight, by Christopher Nolan.. A movie that had gripping to my seat, enjoying every second of it, and there were some scenes where the audience was so involved, that we were holding our breath, clapping when something amazing happened on screen.. I’ve never really been a Big fan of the Batman, or Superman and such movies, but decided to watch this movie for Heath ledger, i had seen him earlier in Brokeback Mountain and thought he was a fantastic actor.. and then he had to go on and die. well, atleast he left us something to remember him by.. the role of Joker!! 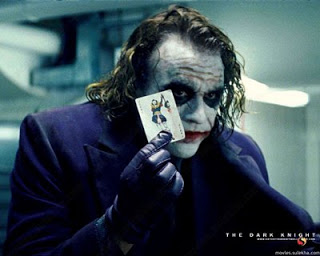 The movie which is supposed to be all about Batman and how he keeps Gotham city clean has turned into a movie that is all about the JOKER, and his ploys..A man who has no rules, who does not steal cos he wants money, who does not kill cos he likes blood is one who keeps the momentum going thru the movie…. The Dark Knight” is not a simplistic tale of good and evil. Batman is good, yes, The Joker is evil, yes. But Batman poses a more complex puzzle than usual: The citizens of Gotham City are in an uproar, calling him a vigilante and blaming him for the deaths of policemen and others. And the Joker is more than a villain….
Thriller? Action? Good guy vs Bad guy? Dazzling spectacle? Devilish fun? Check the movie out. The Dark Knight creates a place where good and evil — expected to do battle — decide instead to get it on and dance around it. “I don’t want to kill you,” the Joker tells Batman/ Bruce Wayne [Christian Bale]. “You complete me.” Don’t buy the tease. He means it….. 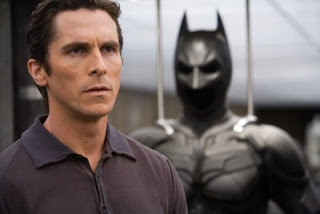 Every plot.. Every explosion is so well executed that no one has a clue what he is upto, but himself…
How Batman and his team (Morgan freeman, and Michael Caine] work on creating a suit that will help him fly better, and how he zooms about in his Batmobile stuns us!!! the kind of effects, technology, stunts that has been used in this movie is probably a 1st of its kind…
Not to foreget the amazing performance by the D.A, Harvey Dent (Aaron Eckhart), who stays above corruption in the city and vows to change the face of Gotham city, and in the 2nd half, he looks “wow”, no words, the ripped apart face, bulging eyes, and the make up is divine…….Maggie Gyllenhaal as Rachel Dawes has done a lovely job as the woman who is torn between two men, one her friend and other the one she loves…..
A movie that you should watch to experience high paced action…

Bruce Wayne: I knew the mob wouldn’t go down without a fight. But this is different. They crossed the line.
Alfred Pennyworth: You crossed the line first, sir. You hammered them. And in their desperation they turned to a man they didn’t fully understand. Some men aren’t looking for anything logical. They can’t be bought, bullied, reasoned or negotiated with. Some men just want to watch the world burn