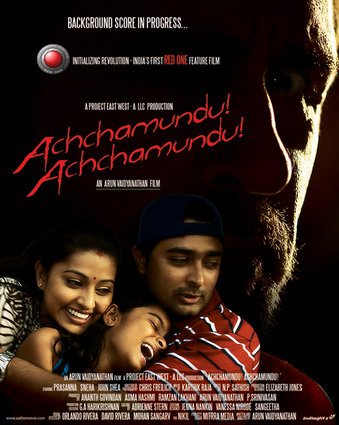 Debutant director: Arun Vaidyanathan
Cast: Prasanna, Sneha, John Shea;
Music: Karthik Raja;
Achchamundu Achchamundu  is a one of a kind movie, infact i dont think i’ve seen any other on this subject made in the Tamil movie industry!!  What is it about you ask ? its about child abuse and paedophiles!!! Yes.. no, dont shirk away and say “Chee, i aint gonna watch this movie”… You need to… Its a kind of an eye opener for people who think anybody who smiles and is nice to their child is simply being loving and caring.. yes, most people are, biut there are the other kind who we ignore.. or are unaware of!!
Set in New Jersey, its the story of Senthil Kumar (Prasanna), and his happy lamily– wife Malini (Sneha) and child Rithika [Akshaya]. They have all acted well, except most scenes the accent and style portrayed seems very fake and just doesnt sit well with the audience. During the first half hour, i kinda got bored, the movie seemed to be in bits and pieces, untill it progressed eventually giving us no clues where it was headed… 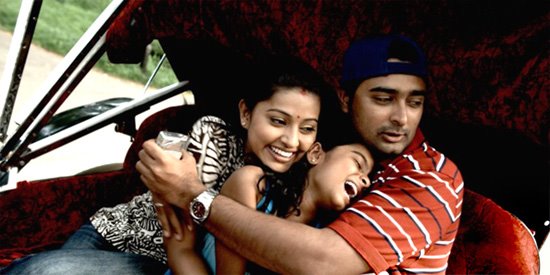 This is where, a painter Robinson (John Shea) enters the story, he is a psychotic paedophile[For those who dont know the meaning, pls click on link — they are people who lust affer children.and sexually abuse them]  . The minute he agrees to paint their basement for a throwaway price of $1000, the couple trust him with not just their home, but the security code to their home alarm system. He is sweet towards Rithika, and so she spends time with him unaware of his ulterior motives.. Through the movie, there are subtle hints here and there on Robinson’s character.. A child is shown tied up in the boot of his car, another boy goes missing after Robinson gets him an ice cream, but because of his external portrayal, he gets away with it!!
Meanwhile, Malini gets pregnant and it is time for Senthil to go to Florida for a conference, but the night before that he spots a thief of sorts trying to attack his house. He then takes Malini’s fears seriously, cancels his trip and decides to stay put at home with his family [ figuring that is the only way to protect them] .
Unable to resist further, Robinson decides to make his move into their home, and  how Senthil saves his family from the clutches of the psychotic child abuser forms the climax.
Arun Vaidyanathan has to be applauded for choosing such a sensitive theme. and presenting it well. Not in one scene do we feel wierd or disturbed.. Towards the end, there are news /newspaper clippings, and statistics on Child abuse across the world shown on the screen…
The movie is not gripping or has some mind blowing scenes, nor have the actors been utilised to their max, but  the way the director handles his theme leaves much to be desired.!!