The past couple of weeks, work has been good, busy but not crazy busy, so managed to catch quite a few movies.. Indian and Foreign.. Am just gonna go ahead put up the names and a mini review on them…!! 🙂 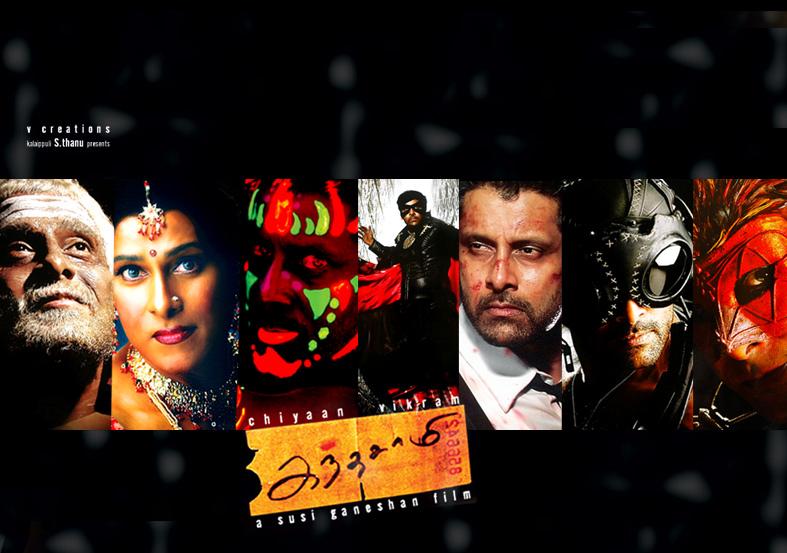 Actors: Vikram, Shreya Saran and a host of others…


A movie that has been in the news forever was quite a disappointment and had way too many frills and fancy stuff.. After 3hr 15min, we walked out thinking had it been for an hour, it would have had quite an impact. the story is also nothing very new, or original, its all about how Vikram and his 10 buddies are the new age Robin Hood, taking from the corrupt rich and giving among the needy….Revolving around the Kanthaswamy temple, it is a movie where wishes made by Devotees on the tree comes true…  Way too many traces of Gentleman and Anniyan is a bit of a spoiler here… !!
Shreya- dont even get me started on her.. Not only does she not look good[ some mite beg to differ..] but Suchi’s voice is a total mismatch… Flat with zero emotions… And whoever did dance choreo for Shreya needs to take dance classes.. The best scene acc to me is the Fight in the corn field and ofcourse the En Peru
meenakumari dance by Umaith Khan.. Her dance, lip sync and movements were soo awesome, i loved it…
Watch the movie if you are a crazy Vikram or Shreya or Shankar Fan… dont expect too much, you wont be disappointed!!
=======================================
Quick Gun Murugan


Rating: **
Quick Gun Murugun is an unlikely Superhero with sufer Gun powers. A Sincere South Indian Cowboy who considers it his duty to serve and protect all around him. All i knew of this character were the little snippets shown on MTV and the Ennada rascala in Om Shanti Om!! 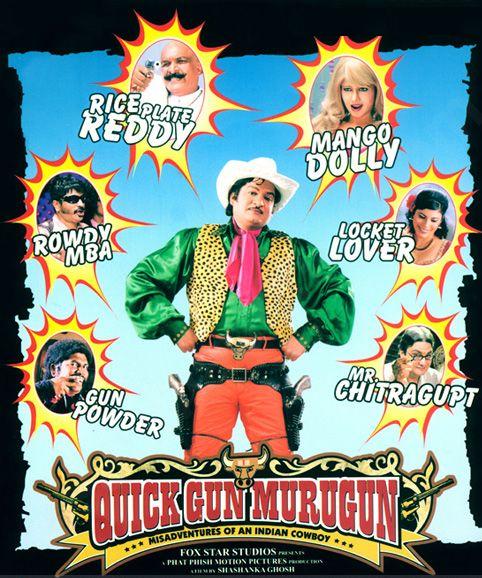 The movie basically revolves around [mis]adventures of Quick Gun Murugun and his fight with his arch villain Rice Plate Reddy!Not to forget the Rowdy MBA and Mango Dolly who are all part of his clan!! Rice Plate has a bee in his bonnet because he wants to be the supreme overlord of Dosa-makers, and kidnaps anyone who possesses the perfect recipe for making lip smacking Dosas.
Though i dint really enjoy the movie, or wasnt laughing my head off, there are some funny scenes , only one i remember is the  take off on Clint Eastwood’s ‘The Good, The Bad and The Ugly’ parodied  in Carnatic mix… A movie meant for those who like Slapstick comedy, and dont mind seeing Southies being ridiculed!! maybe if i were a northie, i mite enjoy it more.. who knows!! 🙂
==============================================
Ninaithale Inikkum
Director: Kumarvel
Actors: Prithviraj, Karthik Kumar, Shakthi, Priyamani
Music :Vijay Antony 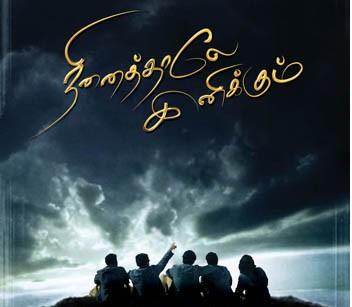 Rating: ***
Ninaithale Inikkum is a remake of the Malayalam film “Classmates“…. Its just a tough guy with a heart of gold Shiva beats up bad guy Vasu. He has the support of friends Shakthi and Bala.
On the other side is Meera , the daughter of an MLA and she opposes Shiva at every turn. Then there’s Sethuraman the silly hostel warden, the cook Subramani and a pointless lecturer character who make up the college side of things. Completing the troop is Shali  a quiet Muslim girl, who at the end you see a completely different side to… The story just ping pongs between present and past, making you wonder what you are watching… and if this is the today or yesterday!!!
Loads of bits and pieces for the audience to remember, until the end where they finally fall into place..
i’ve heard the mallu original is a beautiful movie, after watching this 2hrs of “makes no sense, songs start off for no rhyme or reason” movie, i think i’ll take a peek at the Mallyalam version to understand the story!!!