[Movie] The Soloist -“Based on a True Story.” 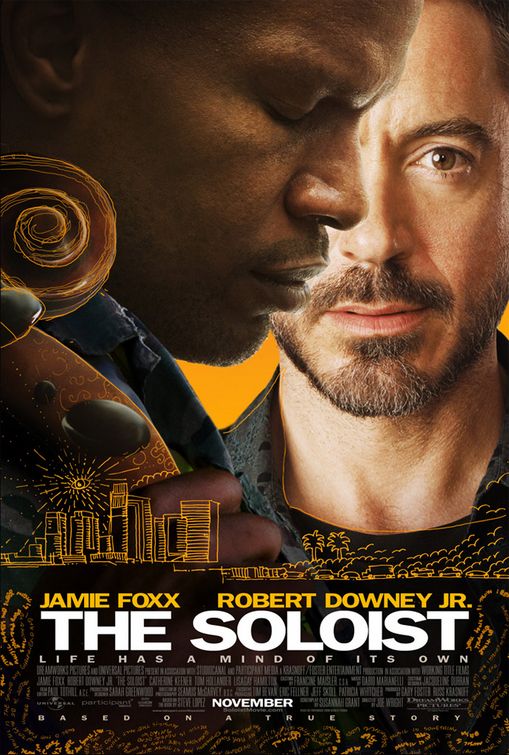 Director: John Wright
Cast:
Jamie Foxx (Nathaniel Anthony Ayers)
Robert Downey Jr. (Steve Lopez)
Catherine Keener (Mary Weston)
Tom Hollander (Graham Claydon)
Rating: ****3/4
The Soloist opens with Los Angeles Times Columnist Steve Lopez (Robert Downey Jr.) riding his bike down a slope and crashing head first on the ground…. But the real story begins when he meets Nathaniel Ayers (Jamie Foxx), a talented musician who’s been playing a two-stringed violin while living on the streets and battling mental illness[hears voices in his head] …Instantly drawn to Ayers’s passion for music, especially Beethoven, Lopez begins to write a series of columns about his new acquaintance while attempting to get him off the streets and perform again.
The lady who sends the Cello she has used for 15odd years before Arthritis confined her to a chair, and how the Cello rides to Lopez is a beautiful scene… The way Nathaniel looks in awe at the New Cello, how he does not want to let go of it are heart wrenching scenes…  Amidst numerous achievements and setbacks, Lopez and Ayers develop a friendship based on mutual respect despite their many differences, and Lopez rediscovers his humanity. 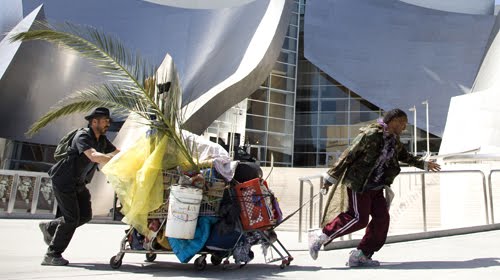 The movie uses sound and silence very well. Two great examples are a flaming car passing Nathaniel’s window in a flashback during the race-riots and Steve jumping into his fancy car to escape the sights and sounds of the homeless around him. This is a perfect way of showing two different worlds.
The voices in Nathaniel’s head give us an insight into how frustrating life must be for him but there are too many scenes with people sitting listening to him play. The sequence with neon colours flashing on screen while an orchestra performs has quite an effect on the audience…
The driving force behind this movie is, without doubt, the lead actors in the form of Foxx and Downey Jr as they prove to be a powerful combination. Foxx is left to run with his character of Ayers, whose only desire is to play music, and his performance is every bit as good as that in Ray.
Jamie Foxx- with his eyes darting, head bowed down, wacko sense of dressing, anger on a low simmer, doesn’t cheat in his portrait of Ayers’ illness. Something inside him will always remain unreachable. Downey’s eyes finally come to reflect that acceptance, capturing the film’s heart.
The Soloist isn’t about Big fancy moments, a fairly slow movie, it leaves you wondering what happens next… even after switching the DVD off…!!  beautiful is how i would describe the movie!!