A name that kept resounding in my ears, a movie i had been wanting to watch but that hadnt hit Chennai theaters then… And finally, one day my uncle walked in home with the DVD in his hand… Aaaah…. *rubbing hands together and sparkle in my eyes, i grabbed it from him* … what movie you ask — Need you even ask[err, since i had put it up in the title of the post..hehe] .. it is Inglourious Basterds by Quentin Tarentino….
Infact, i took the dvd with me on my holiday thinking if i find time or am bored, i shall watch.. Alas, that dint happen… managed to watch it day before, here at home!! 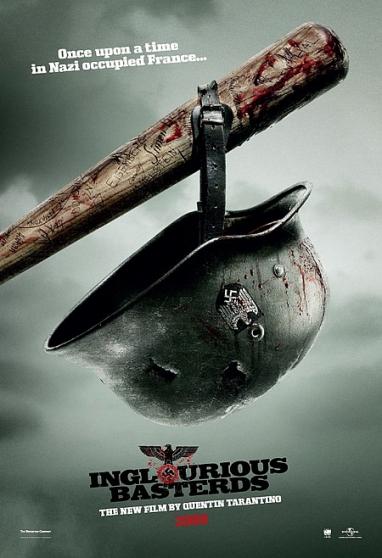 Director: Quentin Tarantino
Rating: ****3/4
Remember, its a Tarantino movie!!! So, watch out for a bit of goryness, full on action and plenty of blod shed… 😉 You also need to remember to read the subtitles [since most of the movie is in French and German] and not to miss any of the action, verbal exchanges happening on screen…
Inglourious Basterds begins in German-occupied France, where Shosanna Dreyfus (Mélanie Laurent) witnesses the execution of her family at the hand of Nazi Colonel Hans Landa (Christoph Waltz). Shosanna narrowly escapes and flees to Paris, where she forges a new identity as the owner and operator of a cinema.
The film, divided into five chapters, begins in Nazi-occupied France. Landa, known as the Jew hunter, waltzes into a quiet farmhouse to flush out hidden Jews. After drinking two glasses of milk, Landa, quietly, chillingly, calls his men in and has them shoot a Jewish family hiding under the floorboards. Only the daughter, Shoshana, escapes, running for her life.
Chapter 2 introduces us to the Basterds — Lieutenant Aldo Raine (Brad Pitt) organizes a group of Jewish soldiers to engage in targeted acts of retribution.  The Basterds pulverize Nazis by killing as many as they can, in the most hideous way possible, and then scalping them. To watch them actually do it has us takes quite a bit of grit…[but luckily these scenes are far and few]
The following Chapters are all about the clashes between the titans…. !!
Lt Aldo, the Apache demands 100 Nazi scalps from each of his dirty dozen.. Must make a mention of the “Bear Jew” played by Hostel movie director Eli Roth. After sneaking into France dressed as civilians to take down the Reich, the Basterds team with British soldier Archie Hicox (Michael Fassbender), a film critic assigned by a British general.. Adding spice to the movie is femme fatal German actress Bridget Von Hammersmark, who is now a spy for the allies. The two revenge plots converge at Shosanna’s theater, which will premiere a propaganda film, Nation’s Pride, and boast a red carpet walked by the Gestapo elite and the man himself, Herr Hitler (Martin Wuttke). Shosanna along with her Black assitance Marcel is  all set and completely poised to carry out a revenge plan of her own….  🙂
What happens then is the climax of this gripping movie…
Hats off to Waltz, as the “Jew Hunter” of the SS, who dangles his host French farmer over the precipice of revealing what he cannot reveal numerous times, then pulls him back with obsequious lines of friendship and understanding. Every scene where he takes charge is amazing, has us amused at the way he gets the point across — the opening scene where he switches languages so the Nazi’s wont understand him,  How he speaks fluent Italian and stumps the Basterds at the movie premiere or the scene where he has captured and confronts the Basterds trying to make a deal with them… the shot where he calls Bridget aside into the room and shows her he knows she was in the bar and was the one who escaped the killings… Absolutely brilliant acting…
A second sadistic German, well-played by August Diehl, functions as an important actor in the final plot twist. Diehl’s Nazi Major, who has an ear for German accents, is almost as good as Waltz…… just about.. almost!!
A movie that i thoroughly enjoyed and wouldnt mind watching again…