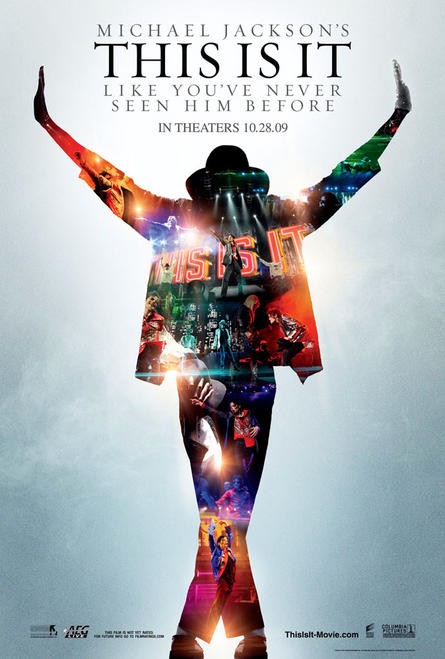 This is it released on 28th Oct and was gonna be in Theaters for only 2 weeks.. I was hoping to catch it and i sure did… the last day it was being screened, at Sathyam Cinemas.. And what an experience it was…. !!!
I grew up listening to Michael Jackson‘s songs and the day he died, i felt very sad… Like someone i knew close was gone… After watching this movie, this tribute, i miss him more..!!  Here’s why..
The movie opens to show his dancers and backstage guys sobbing and talking about how much they were looking forward to the shows, and how close they’d gotten to MJ during the practice sessions.. From there, it is an amazing rocking beautiful soulful music filled tribute to the Man himself.. Rehearsals for various songs, dancers setting the floor on fire, the film editing, singing, vocal sessions, and so much more is what we get to see during the 2hr movie…
It’s amazing to watch MJ control every nuance of the performance, from the dancers’ cues to details in the music that goes unnoticed most times… even how he describes his earpiece hurting -“it felt like “fists in my ears, but am trying to get used to it”… The little “God Bless you”s he says every now and then to his team and to the director….
The part when the music director makes a joke about bringing more booty into the song, Jackson sort of walks away giggling like he’d heard a naughty joke. When Ortega tells him that the cherry picker he’s on is only on the low setting, he laughs and says that Ortega shouldn’t have told him that because Ortega knows he’d just want to go higher. 🙂
Be it Beat it, Earth Song, Man in the Mirror, I just cant stop loving you, The way you make me feel, each of the songs shown, each step they practice had us engrossed…. Woww!!! Words fail to describe the amount of effort that goes into a show [ i know this much effort goes into every show, but not many you get to see, right!!?] The footage they shoot for  Thriller is just mind blowing, almost like they’ve recreated the video as it were… hey were working on and the music video intro shoot for “Smooth Criminal” that uses ’50s movies with Jackson merged into it. I am curious to know if Thriller was finished after Jackson’s death, because the doc shows him and Ortega watching the screen wearing 3D glasses as it’s being filmed, and we’re shown a 2D, more final version.
Audiences are given a privileged and private look at Jackson as he has never been seen before. Michael Jackson’s “This is it” captures the singer, dancer, filmmaker, architect, creative genius and great artist at work as he creates and perfects his final show……….. It was like watching a live performance, actually a live rehearsal i should say… had me singing along with the songs, grooving to the beats and wishing He was alive….
Have never seen my mom so engrossed in a show before.. Infact she called saying – can we go for a movie and when i was browsing through Satyam website, and saw MJ’s This is it, i was tempted to ask her, but thought she might not like watching it.. Alas, who would have thought.. she picked that exact movie and said “chk if tickets are there and lets go”… Am so glad!!! She was engrossed it.. completely emotional… Infact i think the entire theater was glued in like never before…  probably the  1st movie where not a soul [ apart from the ones sittig right in the front, they just pay Rs10 and come sit in theater for AC comfort i guess.. most of them look like that ]… Everyone was in their seat as credits rolled on and till the very last word was done with!!!  Beautiful…………….
Only thing i felt could have been incorporated was his interaction wit others, few words from his family, an interview… something more than just practice…!!!