It was a bright cool saturday, i was all excited for i knew it was gonna be a fun weekend! my bag was packed, camera battery charged and all pepped and ready to go!!! There came the call i was waiting for –
“lets meet for lunch at 1 at New Woodlands and then can scoot from there”, he said..
“Wokie dokie”, i chirped… before bidding adieu to all at home and stepping out!!!

Antique car parked in New Woodlands parking lot…
As we drove along the ECR after a fun meal, the cool breeze kept us company, soothing music from the radio and our phones/ipods kept us in high spirits..!! We had no agenda, dint have any plan of any sort, but all we knew was it was going to be a good weekend…!! Woohoo… 🙂

Pretty butterfly art on a rock near the toll booth on ECR
Now, have i known these looney bins long? nope… 2 of them I’ve known little over a year, and the 3rd, the Senor ;o) well, met him thru the other friend sometime in Aug and we just hit it off…
Where were we headed? Not far… Mahabalipuram aka Mahabs…..

Interesting stall, dont u think?
Only smart sensible thing about this trip was Senor and moi had done a bit of research and i had called ahead to check if Golden Sun Resorts had rooms, which they claimed they did and we could just drive in, and no advance booking was required!! Oh well, we sure hoped their word was good..

Terracotta horse standing tall outside our room
Drove on past the Golden sun, reached A2B -adyar ananda Bhavan – had a coffee and fed the kiddo some dosa… experimented some with our cameras and were on the road once more, this time back to the resort to make sure that room was available.. after a quick tour, peek a boo, we found a room.. Room 14, alas, discovered the front door wouldnt shut…up we went to Room 12, and there we found key wouldnt work in the lock.. what a bummer , right? nope, we were enjoying this!!! 😀

playing around with the lights in the beach
Finally settled into Room 11, the one we saw 1st.. the french door opened out to the pool, and a few steps away was the ocean…. beautiful…. we were 3 and half happy contended souls !!
Why not check out the Shore temple? we thought and made our way out the resort towards the beach… it was nearly 7pm, dark and so couldnt shoot any pics, but the place was beautiful.. could make out the silhouette of the shore temple against the night sky…

Pathway to the ocean
The mommy and kiddo took a ride on a friendly horsey called Santhosh.. the horsey took liking to senorita, licking her hands like Floppy does to me..hehehe..following which we had a bit of adventure..Mommy discovered her phone was missing, and we set about looking for it in the beach, while a brainwave struck me and i called her number only to hear a guy’s voice telling me he had the phone and had just called her home, told her mom the same thing!!

The 3.5 stooges
Phew.. such a relief… but that kinda took the zing off the evening, and we walked back to the car park to return to the room… 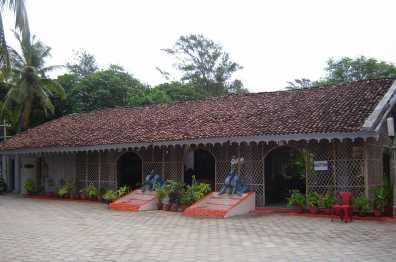 Golden sun reception area
Armed with camera, and our wacko mood, we walked to the beach.. playing , cracking up, clicking pics… playing in the swing…. grooving to the romantic numbers that floated in the air… What timing- hunger bells were just about starting off in our tummies, as took us to the open air restaurant…. The buffet was what we had opted for, Rs200 per head- naan, a kebab kinda starter, couple of side dishes, rice, pappad, and curd rice with pickle were the order of the night…. lazing by the pool, just letting our thoughts flow, we were chilled out completely….. 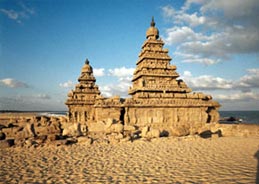 Pic of Shore temple a friend had taken during her visit a year or so back…
We were tucked in by 9, but sleep was nowhere in sight… Senorita suggested we play cards, and that we should go buy a pack[ well, what happened there shall remain a secret, that is until any of the looneys come around reading this post….:D] … which ended up on me, the brave one! hehe… so, out i went into the dark night to buy a pack of cards… the game began around 10, and suddenly the pros wanted one more pack, so off they went this time… we played Rummy for an hour or so… before calling it a day, or rather night and snoring away…. 🙂
The next day dawned bright and early… 5.30am.. Senor and moi, took our cameras and headed off to witness the sunrise, capture the moments on our cameras… It was beautiful, breath taking and an amazing sight that never fails to leave me speechless… !!

Sunrise at Mahabs beach
Time sure flies when you are having, a phenomenon that i see happening over and over and over again!!!  it was 9 by the time we showered, and got ready to hit the road.. back to Chennai.. not before making a stop for breakfast at A2B… that place is just amazing – hot food, good quality and not very pricey… right next to the Radisson Temple Bay and walking distance from the Shore temple, it draws quite a bit of crowd…

A pic by senor…
Savoured the ride on ECR… laughing, having a good time we reached the city… That was one fun weekend… sometimes, it pays to just up and go, esp with a bunch of equally nutty adorable caring sweet nuts called friends… 🙂 Thanks guys for yet another rocking trip!!! 🙂

Trying my hand at clicking diff kindsa pics with my camera!
[Next time, lets do Mahabs and actually get around to visiting the heritage sights and beaches]