The Queen bath in Hampi

During my last day at Hampi, i wanted to visit the infamous “Royal Enclosures”. As i stepped out of the car, all i saw a towering structure and scaffolding everywhere. Climbed on the small outer wall, and made my way into the campus. The sight that greeted me was overwhelming.
It was the size of a football ground where the whole world could fit in. There were structures scattered through, some in good condition, while many were in ruins.Watching the scores of tourists rush in, make their way towards a structure towards the end , i too joined them and walked along, taking it all in. 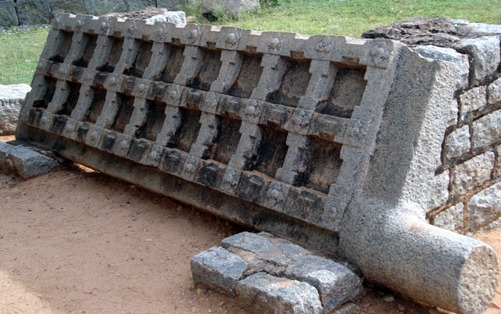 The stone gate structure that lay outside the Royal Enclosure
Crossing the Mahanavmi Dibba, (a 8-tiered platform where state functions and festivities were held) i came upon a long stone structure that was part of the irrigation system in Hampi.
This elevated channel  is meant for feeding water to the tank and is made of stone pieces 8 to 10 feet each joined by vertical props, also made of stone.. Curiosity got the better of me, and i went to the other side to the “Pushkarni”…

Also called the Stepped Bath, or the Queen’s bath, this is a stepped well designed for bathing. The water flows in through the stone channel into this tank. Although i had seen a similar structure near the Vittala temple in Hampi and in Dwarasamudra- The Hulikere, this Pushkarni was just as fascinating. Giving us a glimpse of how Royal the lives of the Kings and Queens were, and the creativity and craftsmanship of the artisans, the temple tank still stands tall drowning us in its beauty….

One of the architecture marvels, the neatly arranged row of steps added to the beauty of the well.. We sat there for a while, till the Sun beat down on us forcing us to get back to the car and turn on the AC….