I dont even remember when my last visit to a Concert in the December music season was… All i know is it was lost in the past, and this concert i attended 2days back was a whole new experience for me!
My friend who’s come down from Bombay called asking when we were meeting, and during the course of our conversation, she mentioned going for concerts, almost daily. And a secret voice from somewhere within me popped out asking her what the concert was the following day..and before i knew it, i had requested my friend’s hubby to pick up an extra ticket for me…  I recall hearing in a blur “Aruna Sairam”…
Armed with strict instructions from Ar to reach the venue- Music Academy, TTK Road by 3.30pm, i was there at the gates by 3.20pm.. The whole place looked transformed, and looked quite swanky…Ar messaged around 3.30 saying they were on their way and that our place was in 2nd floor… I dint knw there was a 2nd floor..damn!! Went to 1st floor, saw a snake like long queue going into space…

The troops came, joined me in the queue, hugs hi hello follwed by a slow crawl up the stairs that kept going till we reached the rooftop, no jokes!! and then wound into the auditorium, and then again making our way down the gallery to find a spot to sit where we could see Aruna sairam and not something that looked like a dot… 😀 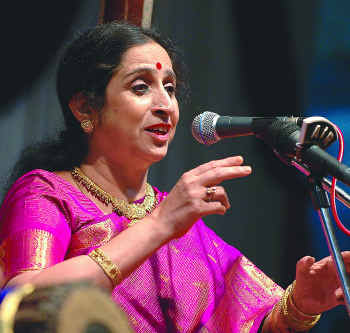 There were quite a few seats empty around the hall, but they had names stuck on them. N told me those were reserved for members, who invariably either came late or dint show up at all… Dont understand this attitude of people!! Do they become high and mighty???
And then there were the hoards of elderly who could barely walk, leave alone climb stairs and they were forced to walk up and down, squeeze into a filled row to get to that one seat available at the other end…  felt really bad…there was this elderly man, who had a walking stick and was made to walk literally all the way to the other end, he was shaking all the way through…  Since there were no seat numbers, it was all First come first serve basis!!
At 4.15, screens opened and Aruna Sairam came alive…. the next 2 hours went off in a haze, with one song after the other… She has such a powerful voice, so much energy and is simply amazing…. I am not too much into carnatic music, but i quite enjoy her style of singing…
The violinist had us mesmerised…. “konjithu” as we say in tamil, it was caressing our souls…. The Gatam, Mrudangam were no less…. Before we knew it,  time had flown and it was 6.45 when she ended her last number..
The music lovers were so visible through the evening.. the hand movements, head nods, some armed with books on raaga, songs, and compositions.. The aunties with brochures of various concerts, already planning their next day agenda… Was quite amusing to watch..
There were a few who i am guessing are regulars, armed with their shawls, cloves[to pop in to avoid coughing or as mouth freshener], notebook pen to write down song names, and binoculars [yes, saw quite a few]..
Wait,the evening isnt over yet… How can we leave without a stop at the canteen to sample a few of the yumm treats… Ordered for Mysore bonda, but had to  settle for Dosas & hot filter coffee, since the bondas were all sold out..
All in all, it was one awesome experience for me!! will i go for another concert? Damn right, i will.. infact, already looking fwd to Kadri gopalnath concert tomorrow evening… 🙂