Couple of days back, 25th June to be exact saw 3 good friends, bloggers march into Escape Cinemas in Express Avenue and get all set to watch the movie 180- Nootri Enbathu… We had all seen trailers, all but me had been tripping on the music and now we were curious about the story, the plot, the acting, etc… 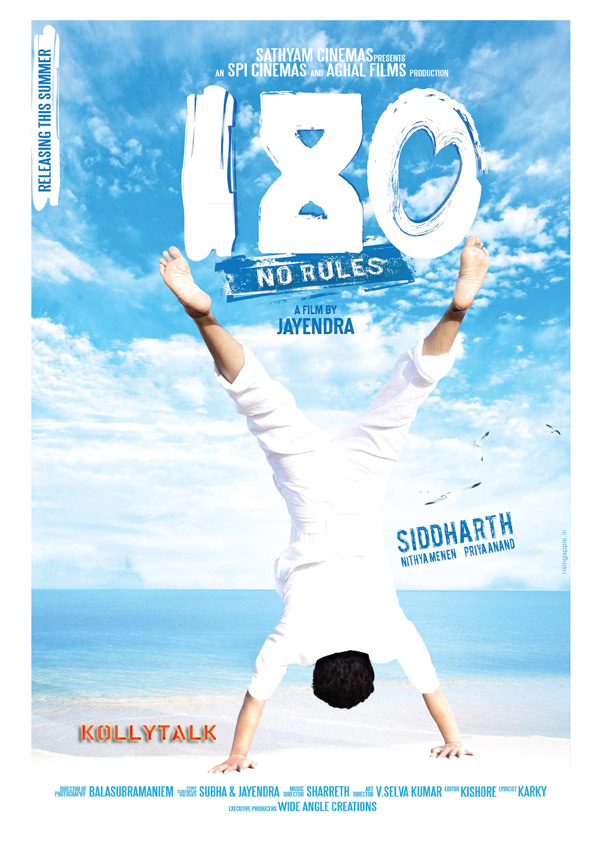 Cast: Sidharth, Priya Anand, Nitya Menon, Mouli, Tanikella Bharani, Gita, MS Narayana, Laskhmi Ramakrishna, Janaki Sabesh, Sricharan, Misha Ghoshal, Cees Van Toledo, Xango Henry, Manager Cheena аnԁ others
Director: Jayendra
Music: Sharreth
Here is how the movie went…
Ajay or Aj (Siddharth) is sitting on the foot steps of Ganges river in Varanasi while a small kid performing the last rites for his father plays around with a toy car… We then come to know that Ajay has come to India when he moves into a space in Mouli-Geeta’s house.. He pays them 6months rent in advance and says he is going to be there for only 6 months. He befriends the paper boy, is one day seen ironing clothes, the other day racing an auto driver who demands an exhorbidant amount from an old lady… No one really knows who he is or what he is upto? It baffled us to see him throw around money like he was a millionaire and yet not see him do any work.
One day, Vidya (Nithya Menon), a photo journalist spots Siddharth, is fascinated by what she sees and tracks him down. They get friendly, start hanging out, pretty soon Vidya falls for him… Every now and then we see Ajay go into a blimp, spaced out and lost in thoughts. It does make us wonder what the story behind that is, but we are kept captivated by his naughtiness and liveliness….
All is well till Mouli tells Ajay 6months is up and the very next day, he is off with his bags packed, ready to scoot off into the horizon.. And then, there is the photograph that the ironwala kid hands over saying he found it in Ajay’s trousers..
You can also listen to Rules Kidaiyathu here
The 1st half is quite enthralling, with amazing visuals and fun songs.. The photography is simply wow.. As my friend Gils said, we were getting 3D effect at 2D rates!! 😀 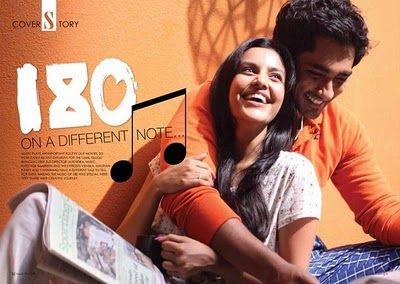 Anyways, let me not digress…
Ajay is off to the bus stand when Vidya comes looking for him, to profess her feelings. She chases him on her bike, and as we watch, she meets with an accident…. This is where the past is revealed and we learn more about this elusive Ajay..  Vidya has a spine injury and Dr Ajay kicks into action, taking charge and getting his Chief in USA to be prepared to operate on her.
His past involves his friend Sam and sweetheart Renuka(Priya Anand). He’s a well accomplished doctor in USA who falls in love with Renukam marries her and has a fairy tale life till things take a turn completely. This is the stage where we understand why the movie is called 180. It signifies the 180days he has left to live…
As he discovers news of his illness, he distances himself from Renuka
Decides to disappear from her life
Packs his bags and leaves the country………………….
he almost fakes his death and remains invisible to all those he knew in USA!
And now, because of Vidya’s injury he was back in USA… Was he ready to reconnect with Renuka? or will he choose Vidya and start a life with her? Does he live or does he die? The director decides to take us on a journey so long and winding that at the end of the movie, we felt like we had been sitting in the theater for 180hours!!  uff….
My Analysis:
The movie starts off light and fun, but suddenly goes through a tunnel and comes out after what seems like forever. The director got caught and dint know how to cut the chase… Wish the movie was crisper and shorter, more to the point…
The visuals are amazing… it shows that the director has an Ad background.. The colours, outfits, camera, photography are simply amazing…..
Positives:
Camera work.
Siddharth, Nithya, Mouli, Geeta, Priya have all acted very well…
Rules kidaiyathu song picturisation was fun!!
The final Climax.

Negatives:
The story.
Dragging 2nd half
Unnecessary twists…
Overacting in some places…
Overall rating: 2/5 [merely for the camera work]
Wait for it and watch it on DVD or TV!!