Mankatha- Game of In or Out

“Mankatha”- the title says it all…  Ajith has pulled off quite a performance in his 50th Movie and Arjun along with the rest of the team adding to it, although i wonder what was the reason behind making this movie in  the 1st place! 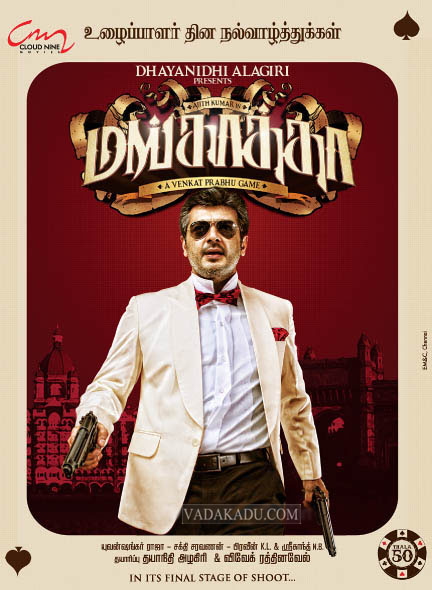 After Chennai 28 that was based on Cricket, Venkat Prabhu has taken on yet another sport as the theme for his next movie-“Mankatha”.. It is based on the sport that involves Money and the Men involved.

Vinayak mahadevan [Ajith], a cop suspended for letting a Terrorist go is the KING MAN in this plot… He plays a Bad ass who is focussed on nothing but MONEY.. The movie is Ajith all the way- with his loud laughs, body language, suave moves, and dialogue delivery…. and ofcourse it shows very obviously that Venkat Prabhu has tried very hard to portray Vinayak as Danny Ocean from the Ocean Series, and it kinda obviously falls flat…

Coming back to the story, Vinayak goes about his days meeting people, and enjoying a carefree life, that also includes his gilfried Sanjana (Trisha) who is the daughter
of an influential local goon Arumuga Chettiyar (Jayaprakash of Yudham Sei fame).

Vinayak is a fun guy, who will do anything for money, but goes about it quite smooth- befriending the right kind of people, tech savvy enough to plant bugs to learn about the plan others are making and all the while living his life to the full…

The movie loosely involves the Betting that goes on  in the IPL matches… Assistant Commissioner of
Police Prithvi (Arjun) is given the case to end the betting scandal.

Arumuga Chettiyar discovers that Rs 500 crores is the money involved in the betting for the Final IPL match. He uses his nexus
with underworld in Mumbai and tries to route it through his recreation
centre- Golden Theater in Mumbai.
He has a team of young guns, amongst who Sumanth (Vaibhav) is Arumuga Chettiyar’s
protege. Sumanth makes a plan with the Police officer Ganesh (Ashwin) to loot the money. Also joining them in the plot are Mahanth
(Mahanth), who runs a bar in Mumbai and Prem (Premgi Amaran) an IIT pass out who’s recently landed in Mumbai with money dreams in his eyes.
Vinayak comes to know of their plan and takes over as the leader guiding them through the loot, till one morning he along with Ganesh and Sumanth land at the place where the booty is stored to discover it all gone! Mahath and Prem have gone missing which makes it obvious that they have disappeared with the cash.

This is when Arumuga Chettiyar begins the hunt for the
treasure, interrogates Sumanth by threatening to hurt his wife and chases after the gang to repossess his loot. Vinayak follows every move of Arumuga Chettiar, and this is where the chase begins to heat up …

Some interesting dialogues in the movie–

* Thappu seiyurathellam sernthu senjuringa aana thandanai mattum thaniya avanukka?
* Sathiyama inimey kudikkavey kudathu da.
* Oh.. Sanjay Ramasaamy.. Mel maadi. Avar marakkurathukulla pooidunga.
* Inimey namma ellam thanni adicha, orey brand aa maintain pannanum. Mix  panna kudathu.
* The King!! No no no.. The King Maker!!
* Over confidence udambukku nallathu illa King Maker.
* Cha cha cha cha Ivan ippadi solla mattaney? Yeppudi solluva sollu…
* Money money money money money Ummah
* Vaada Bill Gates!!
* Action King!! I’m impressed!! Gimme More!!
Let me not reveal the spoilers… but Ajith and Arjun have managed to pull off the twist in tale quite well… Venkat Prabhu has created a movie that shows of Ajith’s various facets… which have also been delivered well.. The movie has strong traces of Ocean 11 series, and Italian Job as well.. It does have a Hollywood style direction as well, which was good to see in a Tamil movie…I know i have said this earlier, but heck, i cant get over the similarities ….
I wish movie makers realise they can create movies without song sequences and the audience will still enjoy them… A background score would have been good enough…. In this movie, i felt there was no need for a heroine leave alone half the tracks belted out, some of which made no sense..!! Again, Venkat Prabhu has created another song like the Saroja Samaa nikalo with this “Machi open the bottle” for Premji…
The bloopers during the credits are worth a watch… yet another 1st in the Tamil film industry!! This was the best part about the movie!! but then being able to endure 3hours just for a few laughs?!!