Where the lotus blossoms

I noticed a gate to my left and people flocking inside as if it were a museum or a zoo with exhibits that would blow them away.. Caught in the moment of curiosity, i followed suit, no sooner had i taken a step within the enclosure did i notice the clock tower, and the beautiful pale pink structure surrounded by lush green lawns.
While i waited the crowds to move on to the next structure, i read a plaque near the pink structure, a mahal of sorts that it was the Lotus Mahal in Hampi.
Located within the Zenana enclosure,  the Lotus Mahal was meant for the women from the Royal Family and their friends or helps. It is also known as the Kamal Mahal [Kamal meaning Lotus] or the Chitragani Mahal.
The arches of the ground floor are recessed and
ornate. The architecture style is an interesting mix of Hindu and
Islamic styles. Lotus Mahal’s Islamic style arches and the Hindu style
multi player roof and base structure are often quoted for the ingenuity
of the Vijayanagara artisans. 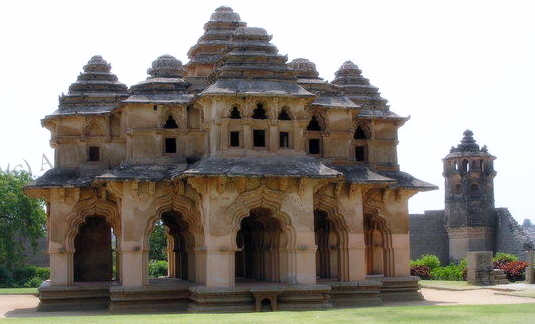 The Mahal is a two-storeyed building  with eight pyramidal roofs created in symmetric form around a higher central roof. The open lower storey has
high arched openings, and so do the windows on the upper storey.
I walked around the structure, captivated by its beauty and the intricate carvings on the arches, whilst a group of tourists with a guide walking nearby. I could hear the guide speak in an animated voice about how the structure earned its name because of the shape it was built in,  the archways and the balcony  resemble a half opened lotus bud. There is also a lotus bud shape that has been carved on to the center dome. 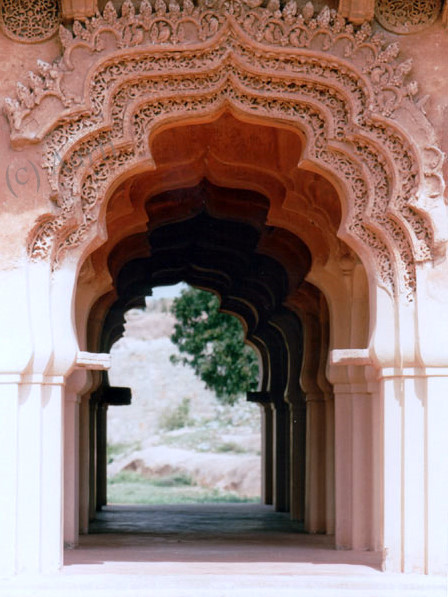 Lost track of time, and it wasnt until i felt the sweat trickle down my back that i  realised it was blazing hot and i was thirsty…. I walked away as another group of tourists rushed towards the Lotus Mahal to get their photographs taken…