These are two giant boulders that seem to be leaning against each other in the middle of nowhere in Hampi. When i saw these rocks while driving back from near the Underground Shiva temple, my tour guide and naturalist Virupaksha started narrating the tale…
Akka Thangi Betta literally means ‘sister stones’ in the local language. Local folklore has it that centuries ago there were two sisters who came to Hampi were weary from the heat and sat down to rest on the side of the road. On hearing them complain about Hampi, and the city Goddess placed a curse was placed on them and they were converted into rocks/boulders. 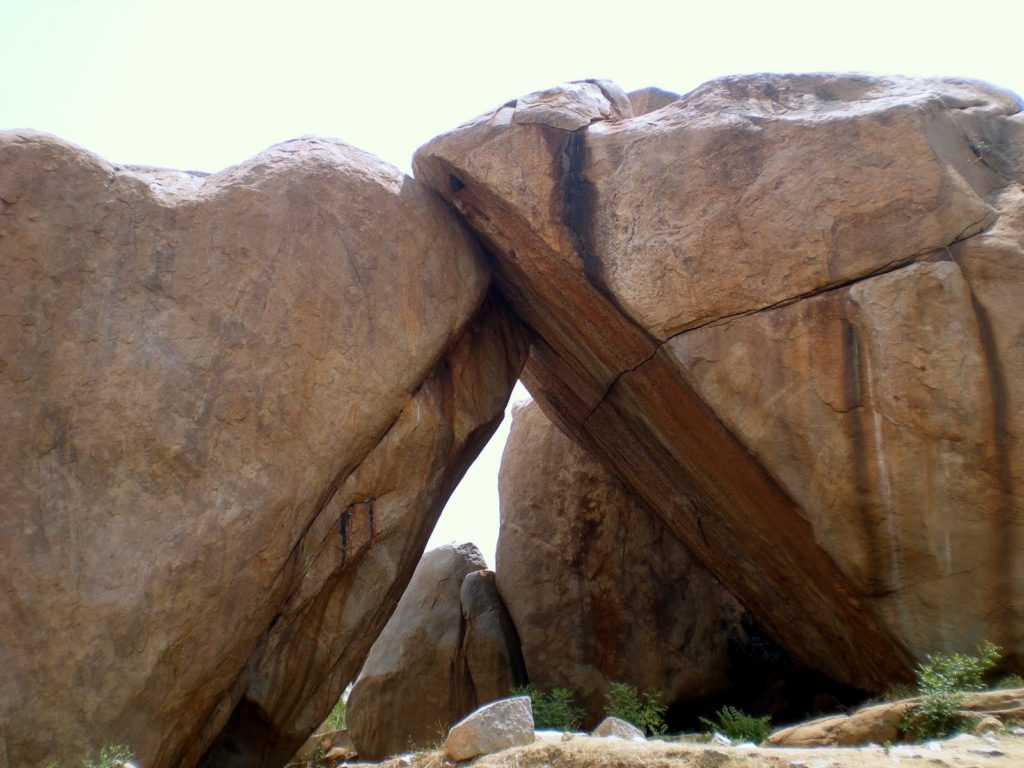 Infact, in Hampi almost all the rocks and boulders have a story hidden within them. Are they really true? Well, they do make for interesting tales while visiting such a rustic town..

Update on 22nd Oct:– Indrani mentioned that the rocks collapsed in May, and so i snooped around the net to see if i could find some news on this and sigh… i did find this link-

Part of Sisters Stone collapses in Hampi  [The story below…]

BELLARY: One of the two gigantic boulders, popularly known as Sisters
Stone and considered one of the important land marks at the Hampi
heritage city, was found broken on Wednesday.

The middle portion of the boulder on the right side has fallen down.
Official sources told The Hindu that the boulder, which had withstood
the ravages of time, split into two because of a natural process and
ruled out any human intervention.

A crack was noticed in the boulder some time ago. Due to extreme
weather conditions, with mercury shooting up during summers and dipping
during winter, the vibrations caused by heavy vehicular traffic and the
sinking of the soil, the crack might have widened and split into two.

Sisters’ Stone was among the major tourist attractions here. Tourists
used to get themselves photographed near the stone. These stones were
also used to organise adventure sports – rock climbing, rappling and the
like – during the Hampi Utsav.