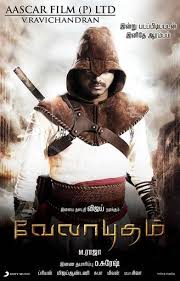 The Story is of how a imaginary character created by Bharathi [Genelia] comes to life via Velayutham[Vijay] and fights against all the evil [the muslim terrorist, fake note printing, corrupt consciousless Home Minister…]

The movie opens with Bharathi and her two friends [journalist] working towards bringing to light the evil going on underground, but the villains kill her friends, and hurt her pretty bad, tossing her into the river, assuming she is dead.. She manages to write a note saying there is a person who is born to kill all the evil and signs off saying “velayutham” seeing the Vel in a nearby temple.. Much to her surprise, there is a man named Velayutham who seems to be doing exactly what she had in mind….

Velayutham is a milk man from a small town, creating havoc in the name of love for his sister [ Saranya Mohan] much to the chagrin of the villagers, who are just waiting to kick him out. The antics he does for his sister are howlarious and heart warming to see the amount of love. He has taken care of his sister since their parents left them, bringing her up, and getting her married to a suitable boy. Oh, and there is Vaidehi [Hansika Motwani], the pretty village girl who has a thing for Velayutham but he does not bite the bullet and keeps dodging her…

The movie then moves to Chennai where Vijay lands to encash the chit he had been collected over the years for his sister’s wedding where he meets another investor, and ofcourse Santhanam, the small time theif who is terrible at stealing… Under the pretext of taking care of Velu and his family, Santhanam gets them to stay with him in hope of doing away with the 15lakhs once Velu encashes the chit fund….

The twists and turns that occur from the time Velu lands in Chennai to his sister’s wedding is a mix of uneblieveable acts, gimmicks and acrobatics…  Director Raja seems to have been inspired by Vikram’s Anniyan to a point where he gets Velu into a costume complete with a sword and has him flying in air, riding a horse out of nowhere and discovering evil men everywhere he lands…. Starting with Velu getting off the train and riding off a bike parked in the station waiting for someone to pick it up, which had a bomb that explodes just as Velu abandons it in the chase after Santhanam, to returinng a suitcase that his sister spots in the crowded Ranganathan street, leading him to follow the bad man and return the suitcase, wherein the bomb explodes at their abode where they are busy stashing away Fake notes….

The grand finale that takes place in the Stadium where the Home Minister promises to reveal the identity by making the Muslim terrorist dress up in Velayutham’s outfit and conning the audience, which fails miserably leading to the truth coming out in the open…

There are so many scenes in the movie that made me wonder – what was Raja thinking when he took on this script…. 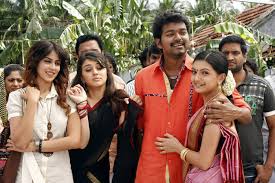 No Doubt this is a good come back for Vijay… but there are so many parts in the movie that are just wierd, unbelieveable and funny[not in the haha funny, but what the hell kinda funny]…

A meeting called by the Home Minister with NOT a single COP in sight
An auditorium full of people and not a single guard
A knife plunged into Genelia, but she comes out like nothing happened
A fair and city bred looking Hansika who is the daughter of Bhaskar in a village

Good to see Pandiarajan back in the big screen…
and there is only so much that Santhanam can also do to keep the audience awake!! 😀