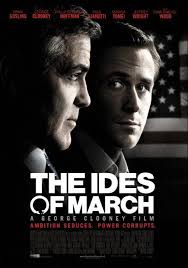 Trivia on ides of March :-

The Ides of March (Latin: Idus Martiae) is the name of the 15th day of March in the Roman calendar, probably referring to the day of the full moonIn modern times, the term Ides of March is best known as the date on which Julius Caesar was killed in 44 B.C. Caesar was stabbed (23 times) to death in the Roman Senate by a group of conspirators led by Marcus Junius Brutus and Gaius Cassius Longinus.

The Ides of March takes place during the frantic last days before a
heavily contested Ohio presidential primary, when an up-and-coming
campaign press secretary (Ryan Gosling) finds himself involved in a
political scandal that threatens to upend his candidate’s shot at the
presidency.

The movie is a thriller that is centered around the political
campaign of Mike Morris [George Clooney], the Pennsylvania governor who is also  a Democrat eyeing the President post. Before he can go on to acquiring the President’s seat, he needs to win the Ohio elections, where it is evident he needs the support of the influential
Senator Thompson (Wright).

. Though Paul
agrees that Duffy has the “brains”, Paul continues to  maintain that he has the “balls”
along with the brains, which is Stephen.  Stephen does what he believes in, unlike Paul who will do anything to WIN… As the campaign progresses, one fine day Duffy invites Stephen for a
meeting and offers him a job, which is where the twist in the movie
takes place. And before Stephen could share news of this meet with Paul, the story hungry reporter Ida Horowicz (Marisa Tomei)
threatens to publish news of the meet about Stephen consorting with Duffy, which he rebukes in return getting blackmailed by Ida to squeal something from the inside…

Stephen gets close to Molly, an intern with their campaign office, eventually discovering a deep dark dirty secret related to Morris… This however does not end well, Molly dies and Stephen then takes this opportunity to corner Morris…


The Ides of March  is a movie that is slow, but yet paced
well.. Every scene has been thought through, every dialogue delivered
after much planning…. Each of the cast has done a commendable job,
keeping their emotions in check, delivering crisp dialogues and
emotions… George Clooney has held the role of Governor Mike Morris, a politician with a drive to win beautifully.. The interview on TV where he talks about banning death penalty and yet when asked about how he would react if someone attacked/misbehaved with his wife, without batting an eyelid he replies he would avenge her dead and go to jail…

Ryan Gosling has proved he can take on versatile roles and deliver them with finesse. I recently saw 2 other movies of his- Drive and CRAZY, STUPID, LOVE….
The
movie is based on a stage play, Farragut North by Beau Willimon,  George Clooney and his co-writers Grant Heslov &
Willimon (who  had infact spent quite a bit of time working for Hillary Clinton) have beautifully crafted the movie, where the main role has been essayed with ease by Clooney…