Skywatch Friday… Amidst the silence

It was the last day and we were finally allowed to talk! Yes, allowed to talk.. My friend and i had just spent 10, wait, it was almost 11days inside a campus, doing nothing but meditating,walking, eating, meditating, washing clothes, sleeping, walking, meditating, eating and sleeping once again!  We were at the Vipassana center in Pune, Swargate!
It all began with a phone call from my friend asking me if i had 15days to spare in March- April. And when i probed she said “There is this Vipassana course, and i want to do it, but will do it only with you…”.. That was it!  i had booked my tickets to Mumbai and booked two seats for us on the course! I came to know via friends that Igatpuri is the best of the centers, but they dint have openings on the dates we had in mind…
We planned the trip thinking it was going to be beyond painful, difficult for us to stay quiet for so long..
We started packing our bags wondering if we would be allowed to sneak in one book
We bought detergent and clothesline with thoughts of how the rooms were going to be
We hopped on the train with butterflies and their mommies in our tummies
We were excited and nervous
We were scared and anxious
We were assigned to different rooms with strangers for roommates…
What an experience it was!
The 11 days of Vipassana where we were not allowed to utter a single word [ but for the few minutes spent with our gurus clearing any queries we had] and in the company of complete strangers in a beautiful serene environment went by not so fast, but we did enjoy them!
Our days began at 4.30 am and ended at 10pm..
Amidst sessions of meditation, we had free time where we either slept, wandered the vast gardens, washed clothes or just sat in silence!!
We were exhausted by the time night came and the last hour of meditation was done!!
Maybe because there were no strict concept of meditation or that we were asked to chant a mantra, it was fairly easy! And with time, we mastered the art of sitting in one spot without twitching or our feet going numb [well, it was also part of the meditation that taught us to control our reaction to the sensations we felt]…

On the final day, we were given our phones, and money [that we had given up for safe keeping at the center], and after a call to our homes, we were done! I took out the phone only in the evening to click a shot of the beautiful sky when we leaving the center towards a friend’s apartment… 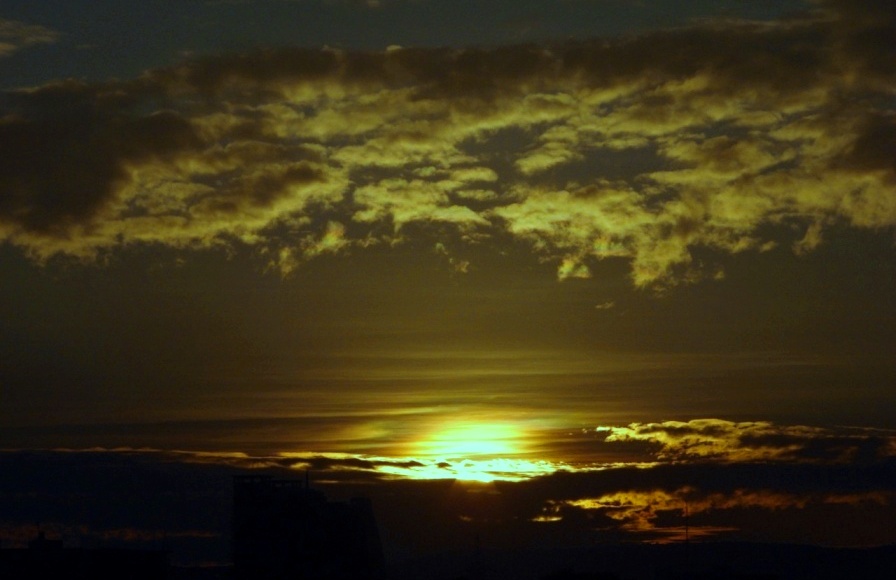 We were content being silent and happy, to a point where we were kinda getting irked at all the yakking going on around us. It was a different thing that we dint understand much of what the others were talking as it was in Marathi… Almost all the women were surprised to discover i was from Chennai [and that i had travelled the distance to attend the course in Pune when there is a center in Chennai]
The program was a revelation of sorts.. It boosted our confidence, refreshing our souls and giving us a new lease on life and people!!
What an experience that was!!
For more beautiful skies, visit Skywatch Friday