Directed by Santha Kumar and produced by M. K. Thamizharasu, this movie is quite offbeat amongst the run of the mill, romance, villain strewn movies churned out by the Tamil Film Industry… 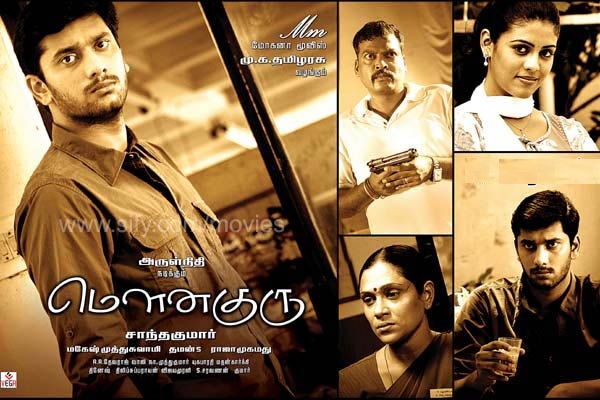 I was sceptical when i heard it starred Arulnithi, but with names such as John Vijay, Iniya, and Uma Riyaz Khan, and a few good reviews from friends, i told myself it will be worth a watch!

Last night, marched into PVR and got set to watch this “Crime thriller” as many had labelled it… From the beginning to the end, the movie was well chalked out and i was quite impressed with Arulnidhi’s acting….

it is the story of a college student Karunakaran[Arulnidhi] who is a good student, but gets into trouble often. Due to this, his mom moves bag and baggage to Chennai where her Older son gets admission for Karunakaran at Aruldoss college, with accomodation in the hostel. His wife’s sister Aarthi [Iniya] is living with them and so their apartment is quite crowded. What starts off as initial teething trouble soon becomes a nightmare and Karunakaran is caught up in a scam for no fault of his.

4 policemen – Assistant Commissioner Marimuthu (John Vijay), Inspector Rajendran (Madhu), Sub-Inspector Selvam (Balakrishnan) and junior policeman Perumalsamy (Krishnamurthy) are crooks down to the T. when they stumble upon a car crash, they open the boot to discover a bag filled with money, decide to loot it, and even go to the extent of killing the driver who is still alive…

From there on, begins a snowball effect, to hide their actions, they keep passing the blame onto others. One lady the AC has sexual connections with records his actions in her bedroom in an attempt to blackmail him and get rid of him. But this proves fatal for her, and she ends up losing the camera and her life.

Amidst all this drama, love blossoms between Karunakaran and Aarthi… but that is known only to his mom.. One day, during the holidays when Karuna returns to the hostel [ he is alone as others have gone off home], he finds a bag outside his room, pours out its contents and while wondering whose bag it is, is caught by the 4 crooked cops.. They were infact waiting to see who the student was who had called and blackmailed them about the murder and money… 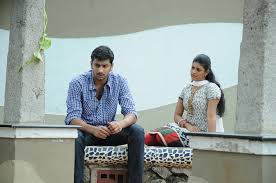 One thing leads to another, and finally karuna ends up in a mental asylum. Cops and the psychiatrist convince Karuna’s family that he has lost his mind.  The twist comes in the form of Pazhaniammal [Uma Riyaz] who is investigating the murder and stumbles upon the truth. And finally, just when they have everyone caught and guilty, she is given orders to let them go as the murder could lead to issues between the 2 states.

karuna then takes matters into his own hands, kills all the cops and then gives in and goes into the mental asylum….

The movie is well paced and quite well scripted. There are no cliched scenes in the crime or the romance, just subtle nuances. But, i did think the end was going to be different… Wonder why the director chose this path!!! … All in all, its a good watch… And one more grouse i have with movie theaters- We dont need intervals in all movies, especially English, Animated and Such thrillers… it just cuts into the flow of the movie!!