Situated along the Bay of Bengal shore lines is the majestic Shore Temple. Built with blocks of granite, this structural temple today welcomes visitors with open arms. Located in Mahabalipuram, a village  that was once a busy port during the 7th & 8th century, during the reign of Pallava dynasty still stands tall and majestic as ever. 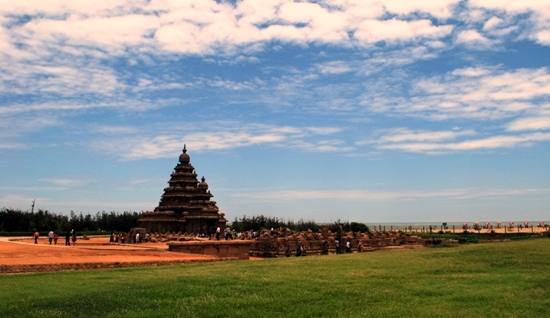 The Shore Temple is a five storeyed structure unlike the rock-cut temples and structures found all around in Mahabalipuram. The pyramidal structure is 60 ft high sitting on a 50 ft square platform. Recent excavations have revealed new structures that were hidden under the sand.

This temple is a combination of 3 shrines. The main shrine and the 2nd smaller shrine are both dedicated to Lord Shiva. There is also a small 3rd shrine dedicated to Lord Vishnu in reclining posture. The outer walls of the shrine are beautifully sculpted with intricate carvings including that of the Nandi. It is no longer a functional living temple, but is a tourist hotspot… 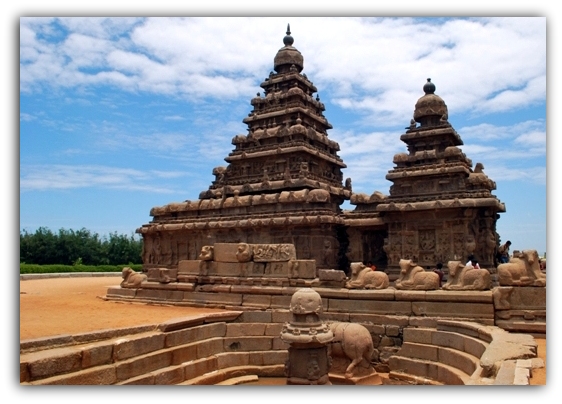 I wandered the premises with the sun beating down on us and the clear
skies keeping us company… There were throngs of people walking around,
some posing for photographs while others marveled at the structure.. I
left the Shore temple eager to explore more of Mahabalipuram and its hidden treasures.

For more lovely skies from around the world, visit Skywatch.