It
had been over 10days since the movie had released, and i had been wanting to
watch, but tickets, timing just wasnt working out. A friend and i kept chatting
about the movie, we looked at tickets, we discussed with others, until finally
one morning we decided “Lets go for the movie tonight” and the friend
said he’d drop me home..

We
were off to watch Paan Singh Tomar, one of the lesser known unsung heroes of
our country. It is the story of how an Athlete became a dacoit and met his
end… 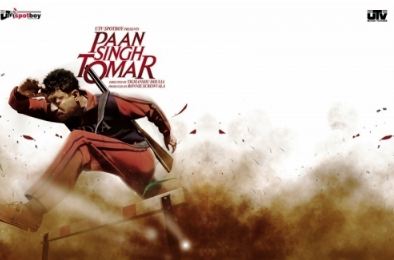 Starring: Irrfan Khan, Mahie Gill, Vipin Sharma, Rajendra Gupta, Zakir
Hussain,Khan Jahangir Khan and many others…
Paan
Singh Tomar (Irrfan Khan) is a village lad who joins the army, and is eager to
eat as much as he can.When one day his commanding officer stops him from taking
another roti, saying “go join the athletes, they get unlimited food”,
Paan Singh takes his word and joins the team. He sure can run, endlessly
without tiring and once he finishes the race, he heads towards the food cart..
He excels in the Steeplechase race bringing glory to the Indian Army and the
country. Infact, at the race, he wears shoes like others, but finds it
difficult to run, and takes them off to go on and win the race.. Such sweet
heart felt moments!!
There is one scene that stood out,
where one of his officers dares him to take a block of ice cream, deliver it at
home to his wife without the ice cream melting… And Paan Singh does
accomplish the task within no time! 🙂
He marries, has a child and returns
to the army. But when on a visit home, one of his cousins plays dirty and beats
up his son mercilessly. The police officers refuse to lodge any sort of
complaint against the cousin. To make matters worse, when Paan Singh shows off
his medals and service, he is mocked by the police. He gets angry and vows to
take revenge, taking matters into his own hands. Things turn ugly, and one day
the cousin breaks into his house, kills his mom and is after Paan Singh. He
sends his wife and daughter away, and decides to fight the battle, killing his
cousin in the process.
With a group of friends &
relatives, he forms a gang, and transforms into the Dacoit of the Chambal
valley. The police  hot on his trail of Paan Singh Tomar. He finds it
ironic that no one cared about him when he won alll those races and brought
glory, but today when he is in hiding, and has become a dacoit the whole world
seems to be after him. 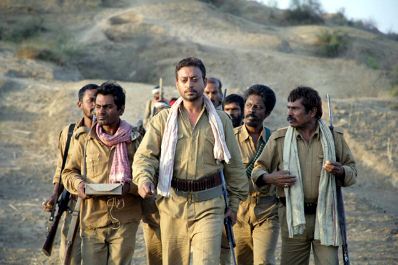 One
of the members in his gang brings them to a town to stay at an old man’s place
when Paan Singh realises he has been trapped by one of his own. The police
circle the area leaving them with no escape route. Their drink has been
poisoned, leaving them weak and helpless. The battle rages on till finally Paan
Singh falls prey to one of the bullets…

The
film kinda grows on you, and we were left talking about what a great person he
must have been and how nobody even knows of Paan Singh Tomar today… There
were quite a few moments in the movie where our hearts tug for Paan Singh,
wishing we could help him and feeling his pain, and agony….

The
entire movie is narrated by Paan Singh Tomar in an interview to a journalist in
a small town….

In the end , just before the
credits, a list of all the national players who died penniless or are in a sad
state scrolls on the screen, making us realise what we saw was just a drop in
the ocean.
I sure hope more such Paan Singh s
are discovered and brought to visiblity by directors like Tigmanshu Dhulia
through articles/news clippings [like how he stumbled upon Paan Singh Tomar ]