My friend returned from their holiday in Dubai and i had gone over to spend time with them and their son…  After a few minutes of playing, my friend asked P [junior] to bring the train set that S[ the friend living in Abu Dhabi] had gifted him…. And well, for the next hour or so the 2 of us- not me and my friend, quite contrary, me and P were lost in the game.. It was the most beautiful train track i have ever seen and so much fun… So colourful, cool and made me wish i was 3….

It was from IKEA… it is their Lillabo 20 piece basic train set and was so cool, we had a blast playing with it…

[Image courtesy: timeoutchicagokids.com]
I set out the track, but P wanted to put it together by himself… The pieces are made of wood, sturdy and smooth edged with small locks that seat perfectly into other pieces. Not only that, but there were 2 pieces that formed a bridge…. There were 4 carriages, including the engine and each one connected via magnet.. It was fun watching P try to get them to lock, with the North & South poles repelling and having him puzzled.. 🙂 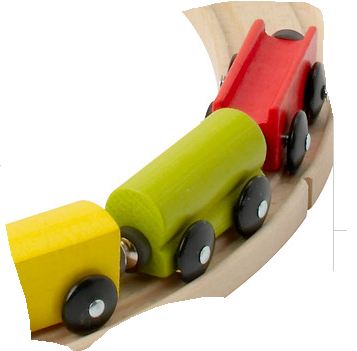 So, if you are abroad, or have access to IKEA, do get your child this train set and it will bring so much joy [ and yes, if you know, do invite, i promise that i am good company for your child and will make sure they have fun playing with the train set :-)]
It brought back memories of the cable train that i had when i was small… Think i still have it somewhere..