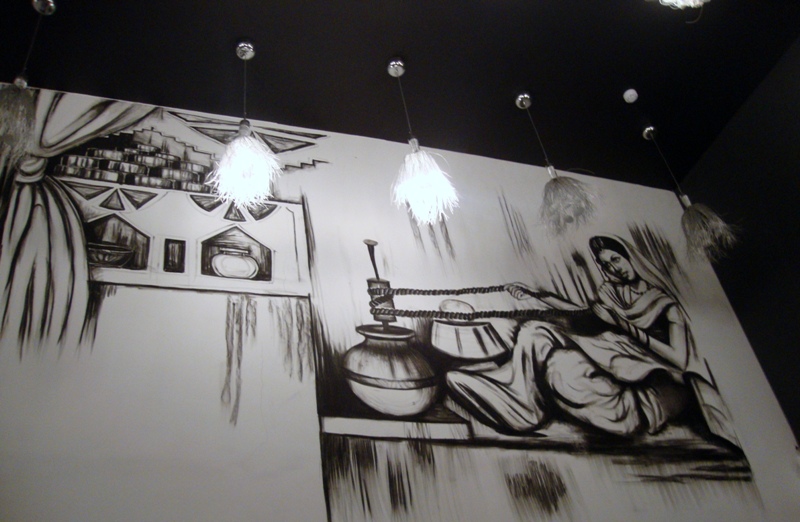 Khader Nawaz Khan road in Chennai has become an eat street, except unlike in other towns these eateries are neither road side joints nor are they small time cafes. Most of these are speciality restaurants.. There is Fresca, specialising in Neopolitian cuisine, Yoko Sizzlers, Cream n Fudge [ cold stone ice cream] and much more. And now, adding yet another feather to the hat, rather the street is Simar, a restaurant that claims to be all about the North Western Frontier. 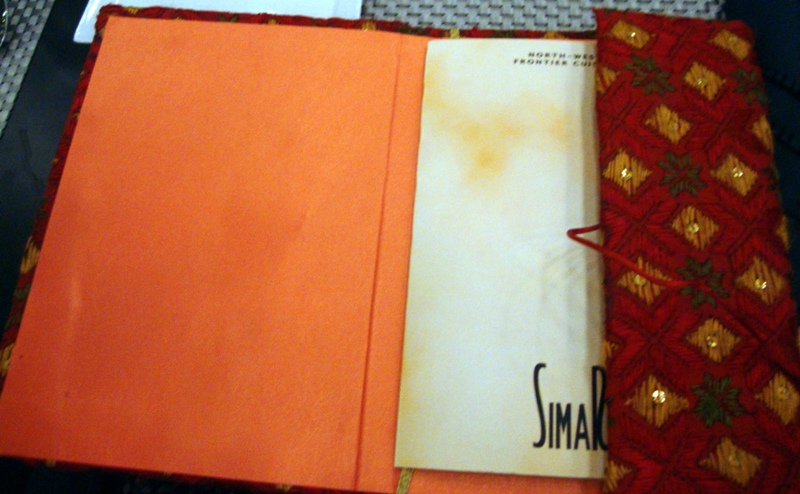 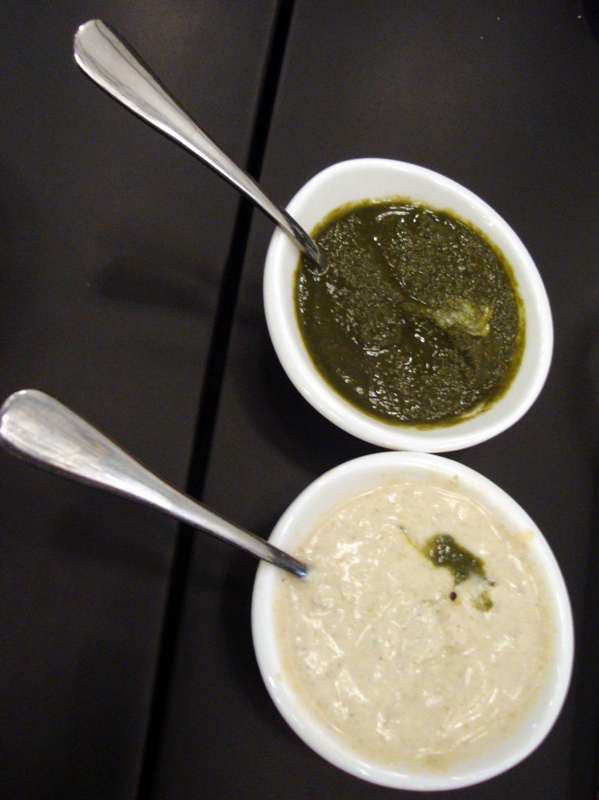 Named after the lady who owns the place, Simarjeet, this is a restaurant that oozes with class in its decor- the light fittings, the black and off white wall papers, the charcoal sketch on the wall and the smart furniture. All of 5days old, the restaurant sure seemed to have attracted customers, i noticed a few other tables were occupied.

North Western Frontier brings to my mind Pakistan, Afghanistan and regions beyond, but the cuisine here is largely about Punjab, the land Simarjeet comes from and familiar with.We were seated almost in the center of the restaurant and got to chatting while we waited for water and food.  As we nibbled on the pappad with coriander and curd chutney, we got to talking about how the city has changed and eating scene along with it.

The starters that arrived on the table were a mix of both Vegetarian and Non vegetarian kebabs. There were about 5 of us vegetarians and well, we did make sure to sample atleast a piece each from the 2 starters. One was a Veg Sheek Kebab, which is one dish i kinda steer clear from at any restaurant. it is one of those boring staid dishes. Well, here too it dint really have me going. It was soft, and tender but there was one flavour that stood out, that had me nearly cringing, i just could not put my finger on the spice/flavour. It was not ginger, it was not chaat masala, i dont know…. 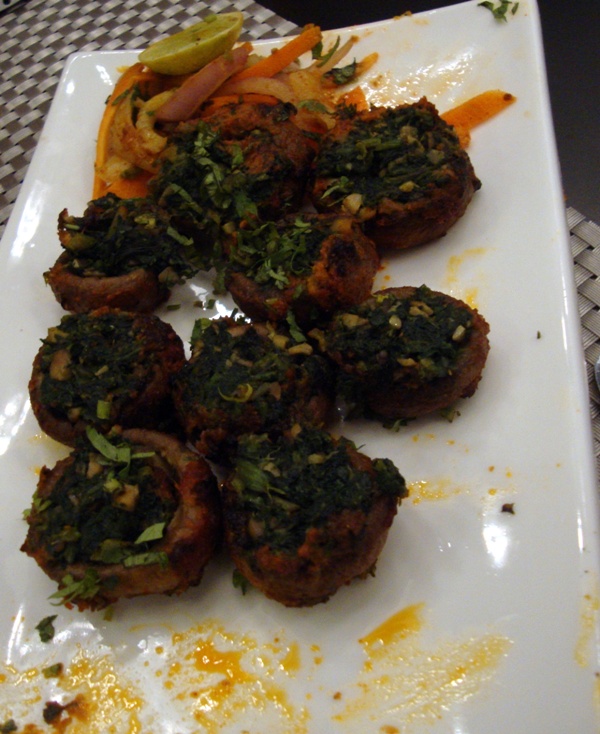 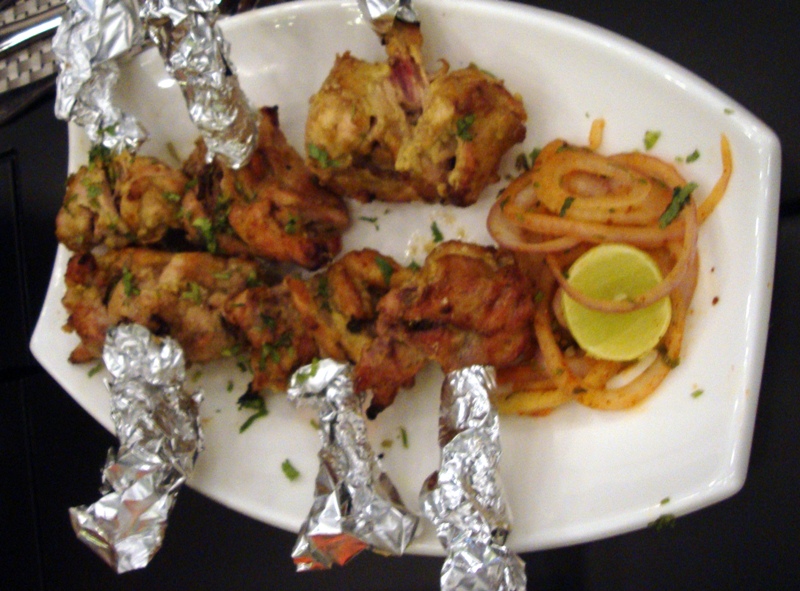 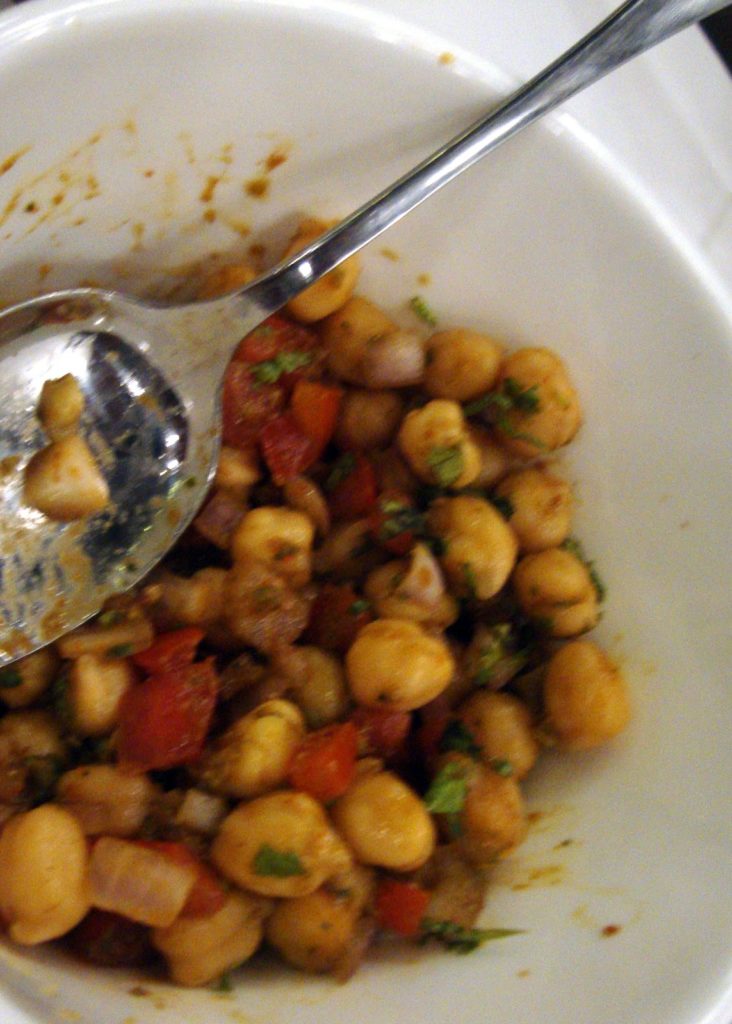 The other starter was Mushroom stuffed with spinach, and it was good.. I
love mushrooms in any form, and this was cooked well, and not oozing
with oil or overloaded with spices.

The non veg starters seemed to be a hit with the guys- the chicken Kalvi
kebab, the Fish Lasuni tikka[ fish that had been rolled with a garlic
& green chillie piece inside] and Mutton seek kebab all were
polished off. Though S did spot a bit of blood in his chicken and we
pondered over whether it was blood or just the colour on cooking the
chicken. 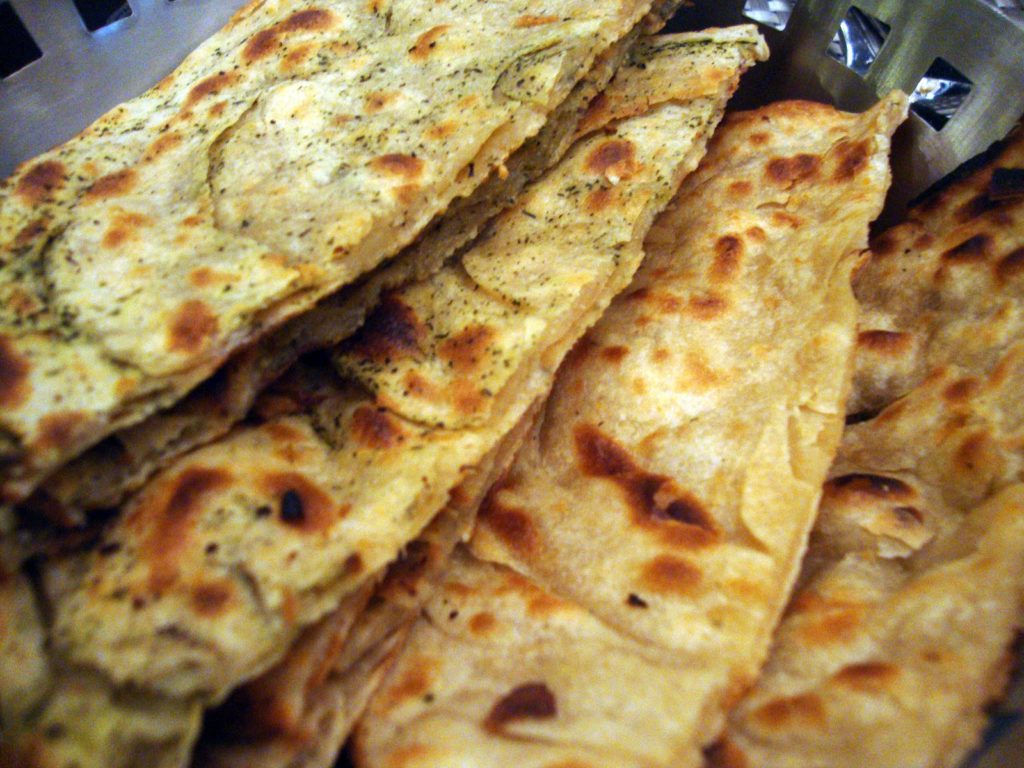 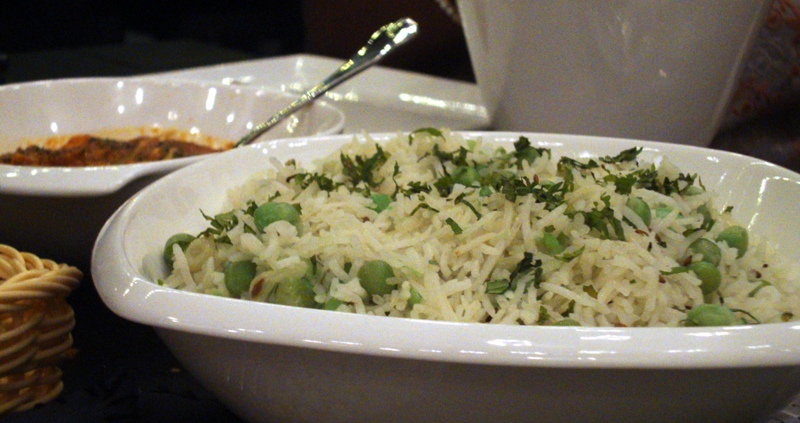 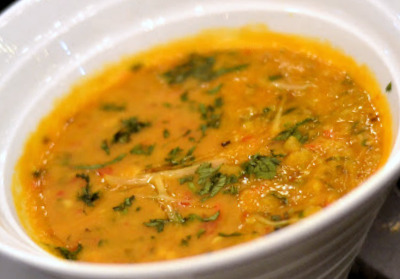 Simar joined us on the table and spoke about her family, her background [ she has been in the media for a while, acted in a couple of Tamil TV serials] and now entered the Food industry, bringing in her family recipes and secrets. While flipping through the elaborate menu and straining to catch bits of what she was saying, we were served a tall glass of Mango Lassi that i quite liked, especially since it was low on sweet… The other lassi we were offered was the Salt lassi, which true to its name was quite salty [ i assumed since at home we cook with barely any salt, it felt salty, but soon others on the table shared the same thought] . The lassi helped calm the hungry tummies as the wait for the main courses began… and we did wait quite a while………… 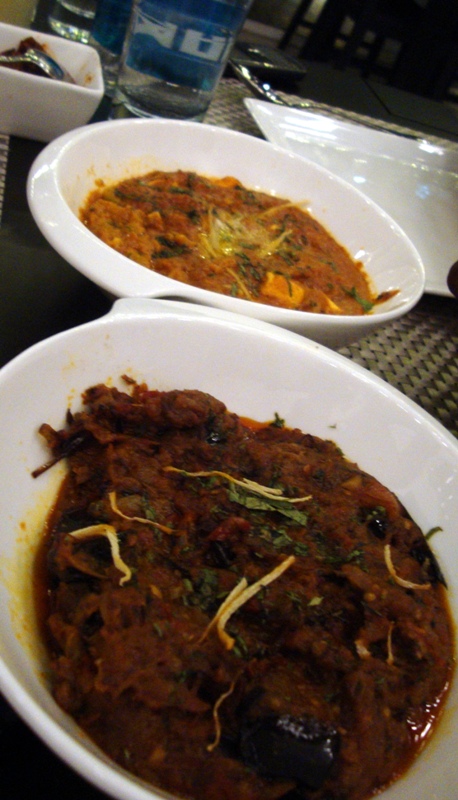 2 bowls with different rotis/parathas landed on the table with a bowl of Yellow daal, and then before we knew it there was a flurry of dishes coming to our table. There was Baingan Bartha, Paneer Butter masala, Channa salad and a plate of Peas pulao for us veggies. The non veg group got a Chicken curry and Rogan Josh to accompany the roti and rice. I liked the paneer butter masala, felt the daal was yet again salty and the Baingan Bartha, well let me not say too much about it, am not a big fan of the veggie and have eaten better ones at my uncle’s home!!  The Peas pulao was quite a treat, except i felt the peas needed few more minutes to cook through. And just as we were about to wind up for the day, a Gulab jamun and a serving of Rabdi was offered. Am not into sweets, and hesitated, but did decide to give it a taste..

The gulab jamun was too sweet, and the sugar syrup tasted of oil, while the rabdi was just weird, it had a grainy feel, almost like dosa batter that had not been made correctly. Dint really care too much about them, and left them aside. 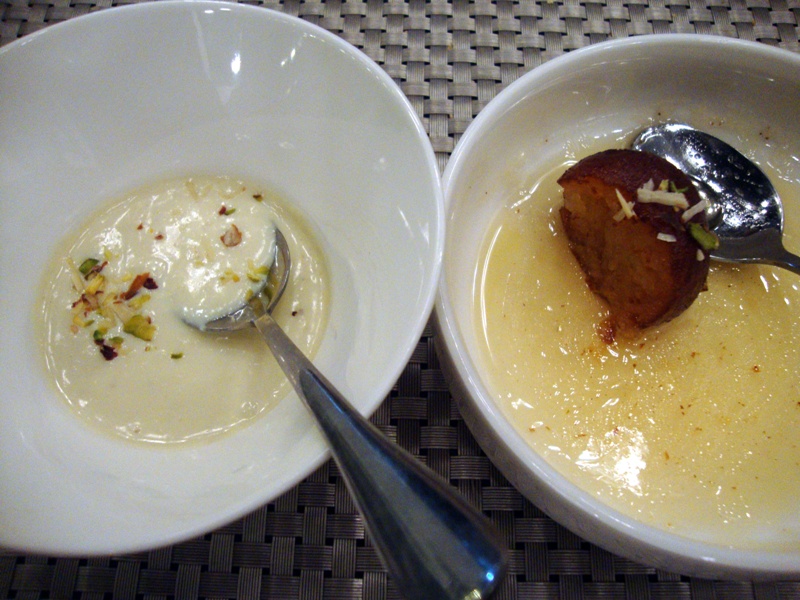 Well, am sure like any other new restaurant, they were just having a few teething issues and hopefully, if as much attention as decor is paid towards the food, the restaurant will do well.. All the best Simar!!