As i walked down the narrow familiar lanes, i spotted the Sign board “Kebab Street”. A small place, it seemed alive with the bright lights and people buzzing about. I wouldn’t call it a cafe, nor would it fit into the category of a Restaurant, it is more of a “grab a quick bite” kinda place. Before giving the “yes, i am in” confirmation to Nishanth, i asked him if the place had any veg items and he confirmed the same [so all you veggies, make note]
Only 2 months old, the place seems to have attracted quite a few from around the locality and beyond, who came back for repeat orders. A simple small space dotted with a few tables and chairs, the walls showed off some of the key items from their menu. At the entrance, if you observe is where the Shawarma stall stands.
I went ahead and placed the order for a “plain lassi” opting against the Rose lassi[ not too fond of that flavour]. The lassi arrived in a take away glass and was quite divine, perfect for a warm summer evening. Within minutes, a red box landed in front of me and instantly i noticed the “veg” “non veg” labels on the box and that there was a tick mark against the “veg” on mine… 🙂

Like a little child opening a gift box, i opened my box to see a wide array of Kebabs waiting to be devoured. It was accompanied by a small container with Mint chutney and another with  Vinaigrette onions.
The box contained
Tandoori Paneer tikka
Achari Gobi Tikka
Dulehari Paneer tikka [ which was my favorite, it was paneer with beetroot stuffing]
Tandoori Stuffed aloo[ that had a strong ginger flavour]
Vegetable Shammi kebab [ the one kebab that i usually avoid but one that surprised me here]
and a nice piece of roti, almost resembling a rumali roti [none like the usual pita bread] 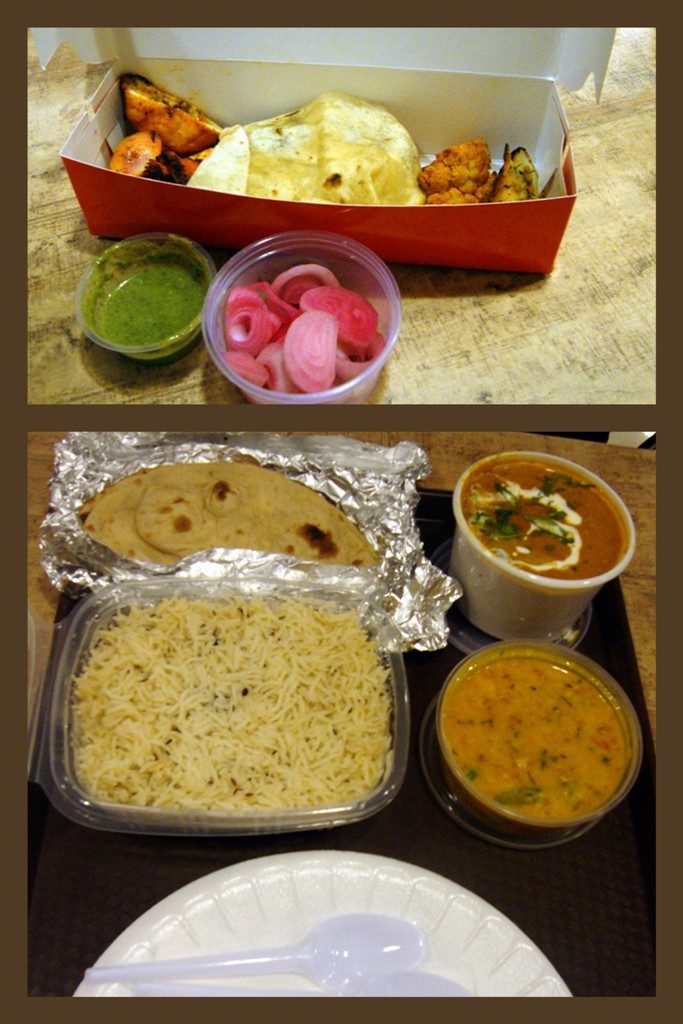 The meat eaters got a similar box with some of the veggie kebabs and few non veg ones- mutton tikka pepper BBQ chicken, chicken tikka, Fish tikka, Stuffed Tangri Chicken, Chicken Sheek Kebab, and Mutton Seek Kebab [yes, they had more options, but i aint complaining] and a roti as well. Apart from this , they each got a small roll – the Shawarma.. Watching them devour, i can safely conclude that it was delicious.. Some of them spoke about how the sauce, flavour was just perfect and not overpowering. 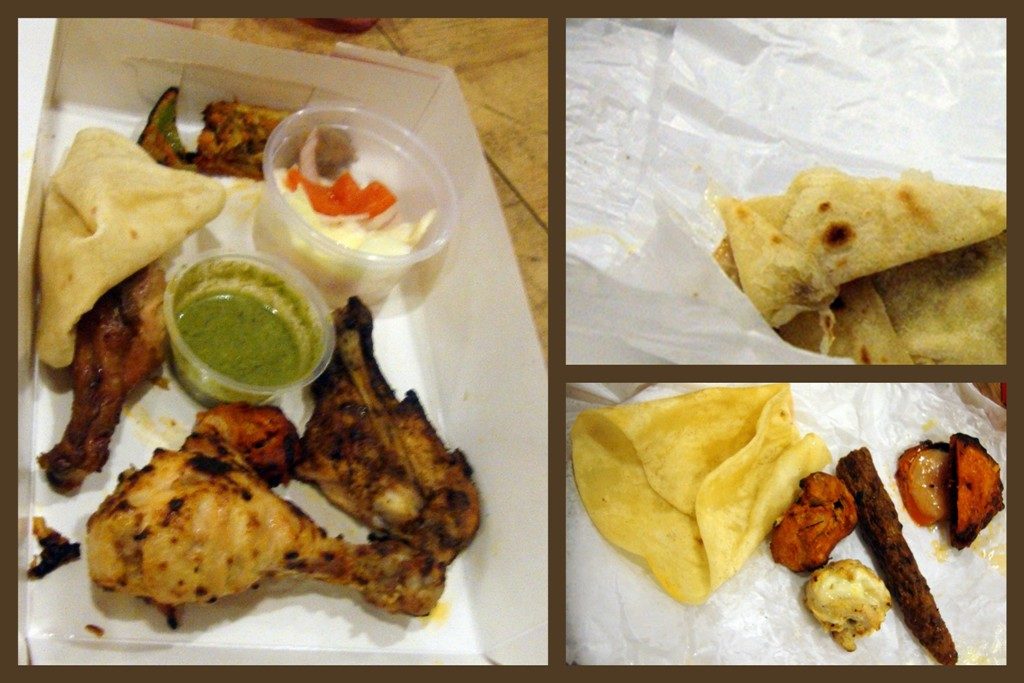 We ate, we drank, we chatted away, and yes, have i mentioned we ate? yes, the food came non stop to the table. It was either a repeat order of the kebabs or a platter with Jeera pulao[ quite divine i must say- the flavours were simple but it was rich], Yellow Daal, Dal Makhani and Paneer Butter masala . Well, these are unfortunately the entire gist of the Veggie dishes, but you wont be disappointed. I enjoyed the Pulao, Dal and Paneer [which was a tad sweet but was so fresh and soft… it made up for the sweetness]
The non veg eaters also got a similar platter- Biryani with Butter chicken and Tawa Chicken. Well, i shall not comment on these as i was busy enjoying the Jeera rice to notice them.. 🙂
All the food was served in use and throw boxes with matching cutlery. Tabrez, the man who owns Kebab street mentioned this was a conscious decision, one that was meant for the Hygiene factor. So, no worry of washing cutlery, plates or bowls and no messy platees or glasses with fingerprints on them. Before we could wind up for the night, Tabrez insisted we try their dessert- Kheer [made with rice, dry fruits and sugar] It was smooth, cool and yumm… Not too sweet, exactly how i like my desserts! 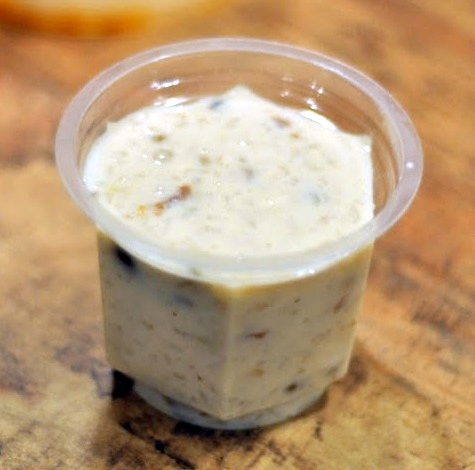 During the course of the evening, a few ordered soft drinks, more precisely Coke and Diet Coke’s, with Doc in the house we got to talking about the good and bad of Caffeine, especially in soft drinks. He mentioned how it was bad, no matter how much one had during the course of the day…. The conversation got quite interesting, reaching great heights till all of the cans were piled in the center… Take a look at how many were guzzling down these aerated drinks…. 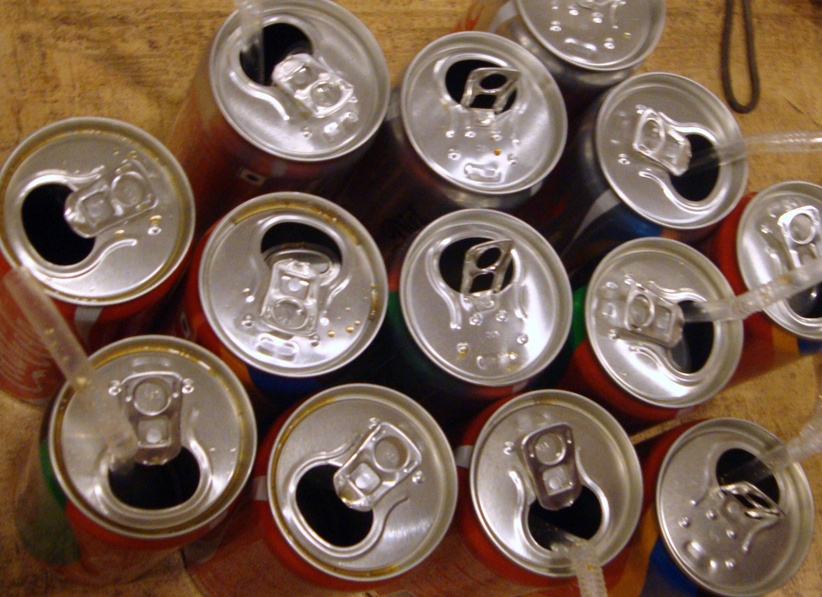 Overall, it was yet another fun night. The place is definitely one i would visit many times, if only to grab a box of kebabs and some Jeera pulao….

There are two routes to reach the eatery:-

Disclaimer:
This was part of a CFG Showcase that I attended and was conducted by Chennai Food Guide.
The
reviews posted on this blog are based on my personal experience. Also
remember that restaurants and eat outs sometimes change with time, so
does their food and service. So, kindly consider these factors while
visiting the places. Remember, no two palates are the same. Bon Appétit  🙂