Into the blue waters

Oh wow, guess what? We won we won, she announced.

It was one of those SMS contests run by Airtel. I wasnt an Airtel customer back then, and so had sent in an entry through my friend A’s phone. And much to our surprise we’d won the 1st prize. It was a one day all expenses paid stay at Taj Fisherman’s Cove. [it has been rechristened as Vivanta by Taj Fisherman’s Cove]..

She then went on to say “am thinking of giving this prize to P & C [ a couple friend of ours] since it is for 2 people.  I replied “yes” and forgot about it till a few days later. As we were winding up for the day, my friend said “C has just discovered she is pregnant and so they are not keen on taking up the one day at Fish cove, what say we take off and go?” 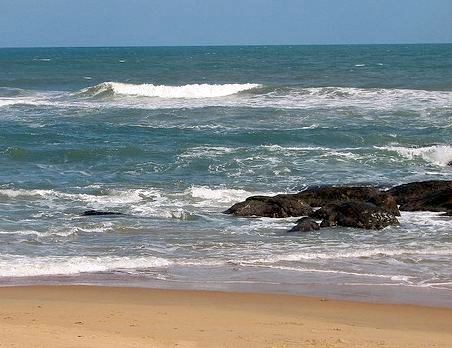 Whoopie, i was excited. It was the 1st time i was getting such an
opportunity. Soon after, we called and booked the date, packed our bags
and drove out to Fisherman’s cove along ECR.

Greeted with a garland made with shells and a welcome drink, soon showed
to our room. It was beautiful, the walls were Blue, with a fish
painting and another landscape adorning the other wall. The room, like
every other opened out to the ocean and what a view that was….

We strolled along the beach, did a bit of work out in the gym [before
dinner] and enjoyed a “on the house” dinner. A night stroll and an hour
or chatting up while the waves lashed made the day magical. We decided
to do something fun the next day, and as promised, we did.

The morning dawned bright and beautiful, and we were high. Enjoying the
luxury, pampering and the chance to unwind, we soaked it all in. Around
11, after breakfast and some walking, we walked along the shore, further
ahead where a guy jumped down from a tower of sorts and greeted us. He
then took us to a catamaran and introduced us to Senthil, the guy who
was going to be our guide/and saviour… 🙂 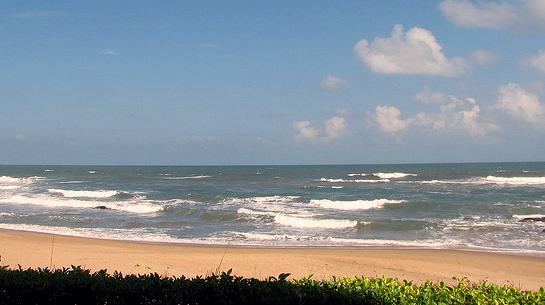 We were gonna go on a Catamaran Ride… Took off our shoes, i removed my specs, handed over the camera, and bags to the man in the tower and headed off towards the Catamaran. With butterflies and their grandparents doing the tango in our bodies, we hopped on to the wooden plank, holding on to the rope praying we got back safe. Oh, i forgot to mention- we were wearing life jackets and Senthil promised there was nothing to fret about.

“Ya right, tell that to 2 very frightened gals, neither knew swimming”…. Within minutes, we forgot our fears and were screaming away in excitment, atleast i was. The water lashed onto the catamaran, drenching us, it was cool, it was sweet and it was salty. Boy, what an experience. After about 10mins, Senthil stopped rowing, and said “This is it, Jump”

“No way, i aint jumping into the ocean, what if that is the last time i see anybody… what if i jumped, and went straight in and never came up…. “

A bit of coaxing was all it took for us to slowly slide outta the catamaran into the deep ocean. Senthil gave us the rope from the boat to hold on to, and in a matter of minutes, we were floating in the ocean.

I could feel the chill from the water under me, while the Sun blazed
down on my face. The only glitch was i couldnt keep my head down
straight, the water would go into my ears, and that was not a pleasant
feeling. I kept my neck a bit above the water, and well, did end up with
a slight catch. Allowing the silence to engulf us, we got quiet, i was
holding onto the rope tight and listening to Senthil talk [he was
generally chatting away, letting  us know he was right there]…

Closed my eyes, and allowed myself to relax, and that was it… Time
went by, and i felt like i was floating. 30 -40 mins must have passed, i
opened my eyes to see the boat was well, quite a distance away and i
was safe and sound.. Paddled my way back to the boat and not too
gracefully jumped onto it… Phew, what an experience that was…..

The next few hours were spent talking about it, how awesome it had been and how scared i had been… Few hours went by, we were back home and slowly i noticed my face turn a deep shade of beetroot, thanks to all the sun soaking i had done… 🙂

PS: These photographs were taken during a recent visit to Fish cove [well, i think it was over a year ago]… This experience happened way back in 2004… 🙂