Sunday morning 6am, i was at Sun Plaza, what was once Sun Theater is today a complex with stores and restaurants.
I was there with many others looking forward to the Heritage walk by Mohan Raman that would take us through the Theatres of Mount Road [some of which have still stand stall while few others have been brought to the ground]. Organised  by Chennai Heritage, this was a lovely way of spending the Sunday morning- the stories, the insights, the little bits and pieces of information shared by other participants, beautiful.. especially for a movie buff like me!

We started of at the Sun plaza, which was the site of the old Sun
Talkies. Even thought it is technically not Mount Road,  it was the chosen spot as it was near Mount road and where the team had obtained permission for people to park their cars in 😉

After a brief introduction to the walk and insight on Sun Theater and how it was brought down, we hopped into vans that took us to where the 1st Multi plex of Chennai once stood- Saffire, Blue diamond &
Emerald complex. Saffire was where good english movies were released, including Poseidon Adventure. Blue Diamond had the concept of continuous shows- starting at 9am and going on through the day. My mom & uncles have spoken about how they would watch the beginning of a movie in one show and come back to watch 2nd half in the next. Apparently, the owners were the ones who developed the Silver Sands  Resort and an ad used to run before every movie running for more than a few minutes with the “Sea horse logo” blazing on the screen. Mohan said “the minute the logo appeared and music came,  we knew it was the ad and all would pile out into the balcony for a smoke or general breather” This complex also had a pub/discotheque in the basement but because of protests from others, it was shut and a  Gujarati/Rajasthani
restaurant called Navarathna came about. Sanjay Subramanian who was part of the group mentioned he has had a few dinners with his family there during the early 1980’s.

Sujatha & Sashi commented on how teachers from Church park would stand at the gate staring at the theater, mainly the bubble elevator to see if any of their students were escaping classes by watching movies here.  Alas, today, the theater remains no more, and the land is just empty and going to waste. 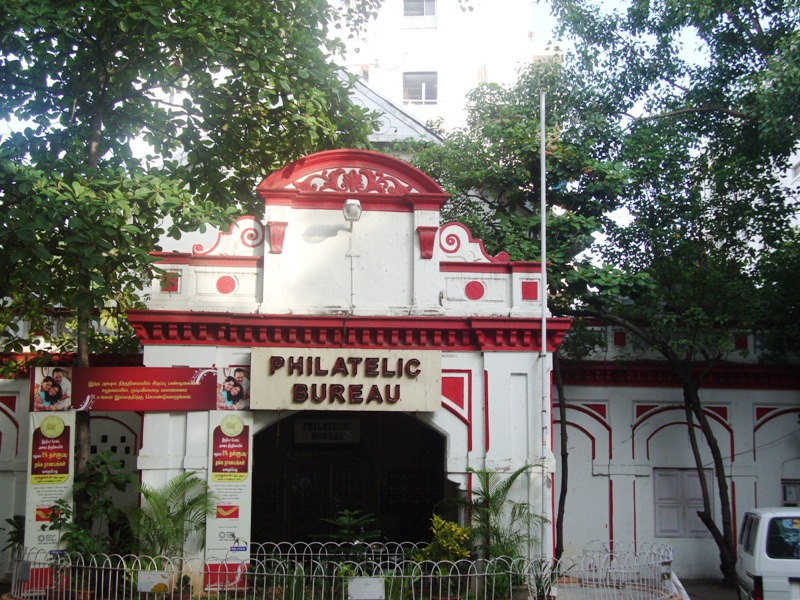 We then moved towards Anand & Little Anand near British Council library [LLA building] and in its place, is a monsterous glass faceted building that is coming up.  As we proceeded, our next stop was near LIC- where we saw the place that had once housed Globe & Plaza theater [ plaza has become Suguna vilas now]. We then headed to where the current Philatelic Bureau stands. This was the old Warwick Theater built by Warwick Major [ Major being his surname and not a title]. We were also given some stories on Alankar and Wellington theater, the latter being Wellington Plaza today. 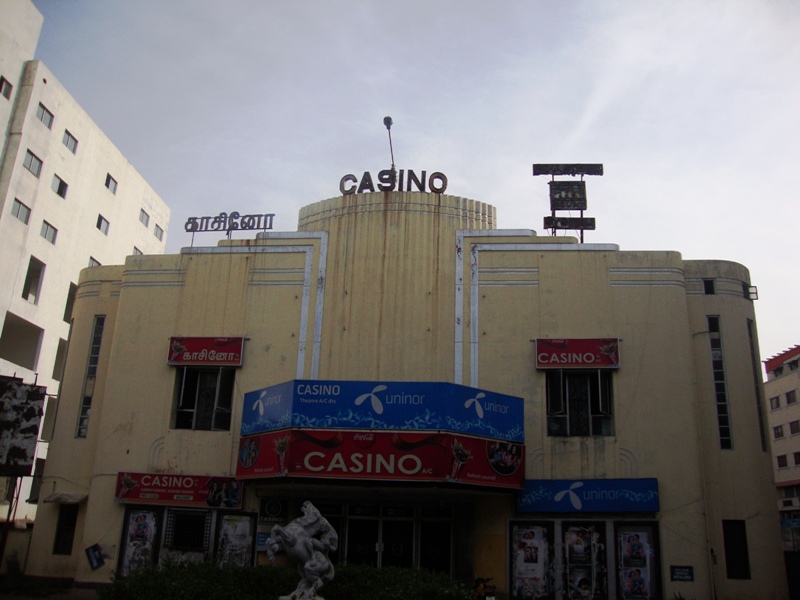 It was time to head around to the trio of theaters –Casino, Gaiety, and Chitra. Of the three, only Casino remains and still shows movies, Chitra is an office complex while Gaiety seems to be another complex or shopping mall of sorts. Mohan spoke to us in length about the changes that the Tamil movie industry went through, and how the concept of placing huge cut outs for actors and sets came about. Apparently for a movie, they erected a huge Murugan temple, so much so that people when crossing the place would say a prayer and pause. For another movie, Vettaikaran that was to be released in Chitra Theater, the director insisted on putting up a Forest like set and wanted to chain a tiger to the set. When others protested, he relented and put a tiger in a cage.

Mohan mentioned about Midland Theatre in General Patter’s road where MGM English
pictures were screened. It then became Jayapradha and today is a mechanic shed. Around the corner was Sagar that became Odeon and we now know it as Melody. A quick visit to Pondy Bazaar to remember T.R. Rajakumari’s theater that has now become a shopping complex/big bazaar?

There were also the two other theaters Kapali in Mylapore [opposite Mandaveli bus stand] and Kamadhenu in Luz [it is a wedding hall and soon might meet its end], a
favourite among Viveka­nanda College students.

There was also the story about a director[ forgot his name] who was very possessive of his heroines. When making a movie with a leading heroine and M R Radha, he dint like the fact that the two were close. He set up a scene where M R Radha had to jump from a building [ back then no stuntmen or fancy equipment were used remember] . On the 1st take, M R Radha jumped, landing perfectly, but the director wanted to get him off the movie and so asked for a retake. And lo behold, M R Radha fell down, broke his leg and left the movie industry saying Theater was far safer and better… 🙂 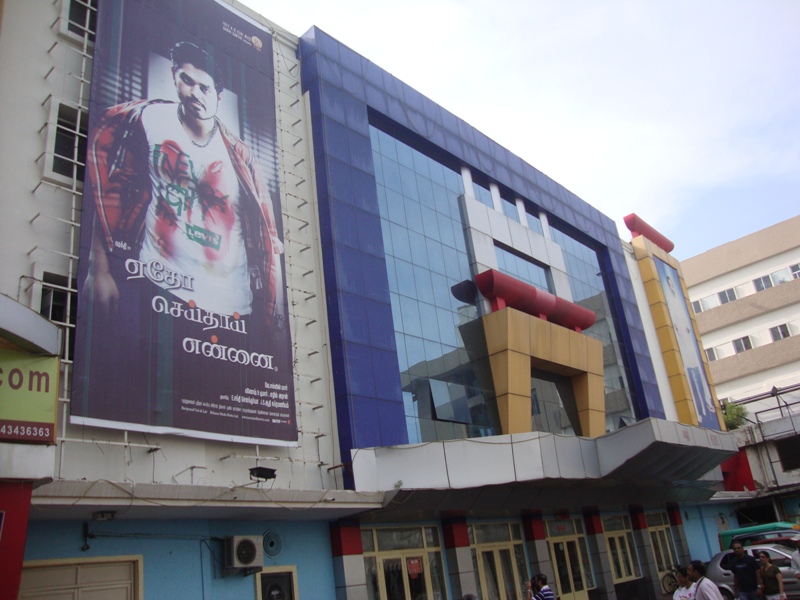 We then went across the road, via the subway [it was empty and well, a bit eerie] to the other side, Wallajah Road where we heard some fascinating tales about Paragon, Lyric, Elphinstone theatre and Jaffer ice cream parlour.

The soda fountain at Elphinstone theatre was very popular among those who wanted to enjoy some treats from Jaffer’s. What was amusing was that if any VIP was watching a movie at Gaiety or Casino, snacks & treats would be served in their seat all the way from Jaffers.


Paragon was where Shivaji released one of this movies- Pudhiya Paravai, even though Shanthi theater had already been built. It seems “Sangam”, the hindi movie was running to full houses in Shanti and so Sivaji decided to release his movie in Paragon. But, the theater that had switched hands to Narasu Group had crumbled during a heavy rainfall, so producers had to spend in resurrecting the theater, getting it ready for the Sivaji release.

Trivia from Wikipedia– it completed 132 days at the Paragon theatre, 76 days at Krishna, 76 days at Sayani, and it crossed eight weeks in all major centers. After completing 70 days at Paragon, it was reportedly removed to allow the theatrical run of another Sivaji Ganesan film Aandavan Kattalai.

The walk was coming to and end, and we made our way towards Shanti Theater. Enroute we saw Anna theater, which is still running, but dint look too good in condition.

At Shanti theater, we entered the main building, which thankfully has not been touched, modernised [ aka filled with jazzy colours and glass… bleh..]. There were pictures of Sivaji all across the walls, one in particular was eye popping, it had been done by K Mohan of Mohan Arts [ they used to do all the movie posters and cut outs back then] it had Sivaji Ganesan portrayed in a very unique manner. 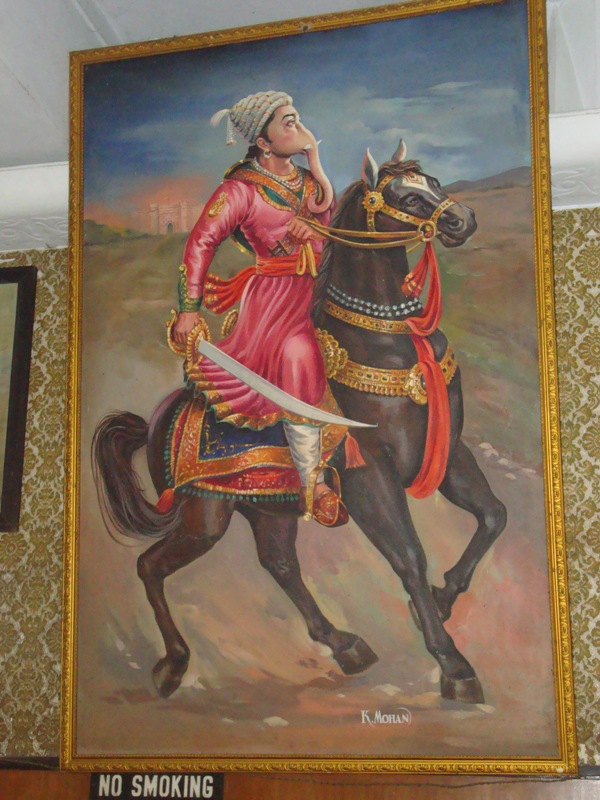 There were also photographs taken during a movie puja- sivaji seated with his mother, and for every new release, they would change the name of the movie on the image and use the same.

We also learnt about the Devi theater, that came up right next to Shanti Theater, how the owners had to go through a battle, law suits to obtain permission.


And then there was little bit on Nagesh theater. When Nagesh approached the city council asking for permission to build a theater, he was turned down “how can you build a theater bang opp a school – Holy Angels school” . Nagesh then called upon the then CM MGR, and narrated this incident. When MGR countered saying “yes, that is a valid reason” Nagesh replied ” sir, how will students in uniform with a security at the gate skip school and come across the road to my theater? they will go to Saffire/emerald while Church park students will be tempted to come here” and that got him the permit… Alas, today, Nagesh is gone and so is the theater, in its place a wedding hall stands.
Followed by a breakfast at Saravana Bhavan [located inside Shanti Theater complex] the walk came to an end..
The city never ceases to amaze me- so many stories, so many legends and yet it is so humble!! 🙂