Everywhere i turn, i see people cooking or baking or talking about one of the two. Looks like the bug is in the air! I enjoy cooking as well.. rather experimenting and so far no casualties [happy to report]… And so it was no surprise that i instantly said “yes” when the PR person called to invite me for the Cook & Dine event at Courtyard by Marriott. 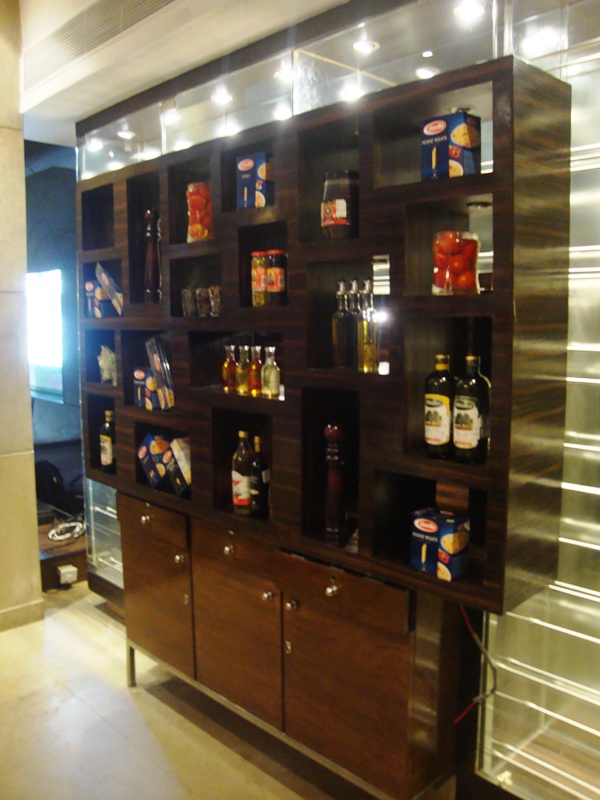 The day looked packed and i was
out the door at 10.45am,only to return around 3pm briefly. As i stepped
into Rhapsody, i was struck by the beautiful chandeliers and
furnishings, very vintage and yet with  a tinge of contemporary woven
within. A waiter offered me a glass of fruit punch, quite refreshing,
considering the day was quite hot.

The stage was set, err the cooking
station that is, with a wooden shelf of sort behind that showcased
various ingredients to be used in the session [as i learnt during the
event]. There was also a huge screen set up, which was quite cool as
people dint have to crane their necks to catch a glimpse of what the
Chef was upto on the table or stove. 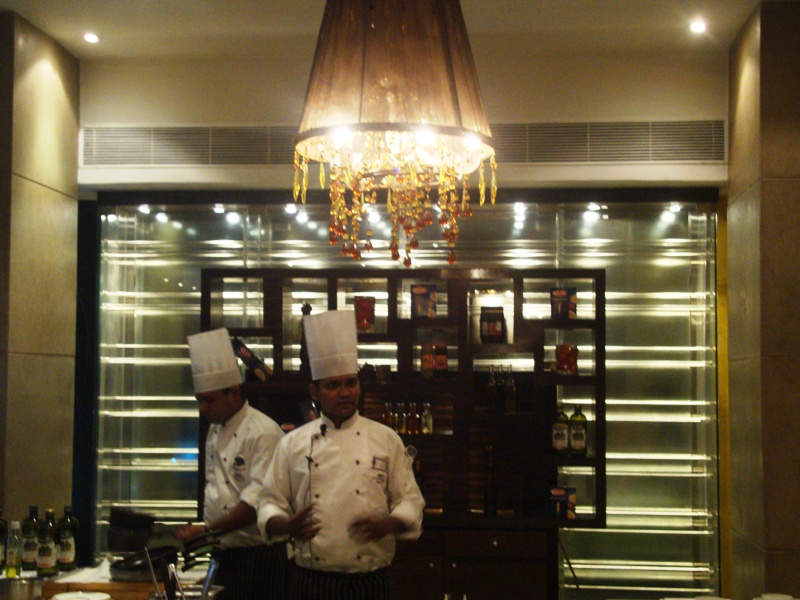 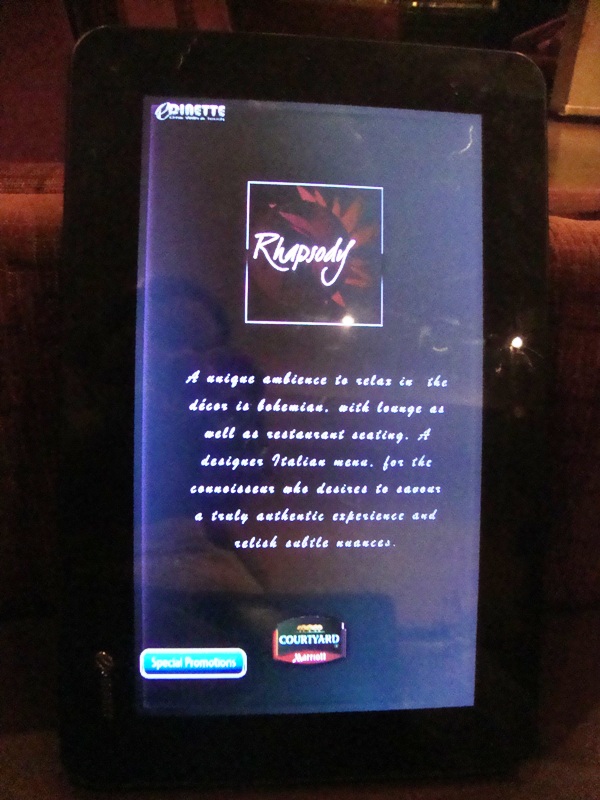 The swanky tablet displaying Rhapsody’s Menu
“The way to a man’s heart is
through his stomach”, no wonder the participants at the event were ALL
women, yes, not a single male at the venue [ apart from the Chefs doing
the session, the camera crew and waiters who were all MEN] Ironic, eh?!
or maybe not.

As i walked around the cooking
arena, i noticed all the ingredients were neatly laid out, in batches
for the various items to be prepared. The one thing that caught my eye
were the white disposable containers, i thought to myself “why couldnt
they have just used simple white bowls instead? It dint leave a good
impression… shrugging the thought away, i made my way to an empty
chair with a good view”

We were each given a folder that
contained the recipes for the dishes to be prepared, a notepad and a
feedback form along with a  pencil.. I love pencils, they are the most
amazing things ever invented by Man!! ok..ok.. back to cooking..

Chef Paul introduced himself before kick starting the session with the

“Tomato and scarmoza bruschetta
with Pear and Arugula salad “- A simple yet flavour filled dish, it had
quite a few ingredients i hadnt seen/used before. The Buffalo Mozeralla,
and Arugula [Rocket leaves]. The audience watched while the chef
whipped up the 2 dishes within a few minutes, and the Chef patiently
prepared them while answering queries thrown upon him from the
participants. We were shown samples of the cheese and the rocket leaves,
got to feel/taste them before and after. The entire dish came together
beautifully, with the roasted pine nuts being the show stopper for me.. 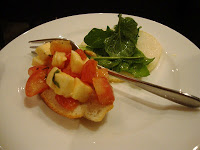 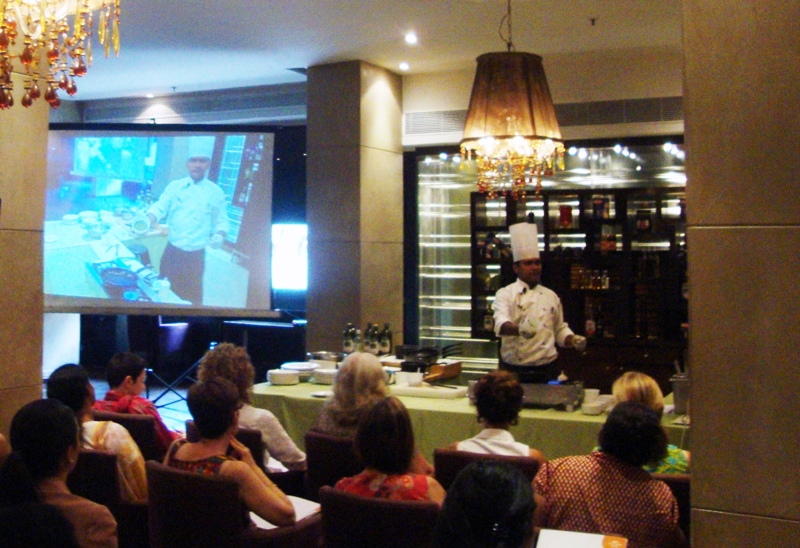 He then moved on to the next dish
of the day, which was “Cream of Broccoli and Roasted garlic soup”.. Oh
boy, i have had/made Broccoli soup, but never with roasted garlic and
this one tasted so divine. It was not over the top pungent and yet added
that extra zing to the otherwise mellow soup. We learnt how to roast
garlic without deep frying it, cooking it on the stove versus cooking it
in the oven and so many other little insights that i know i am going to
incorporate the next time i make soup.. 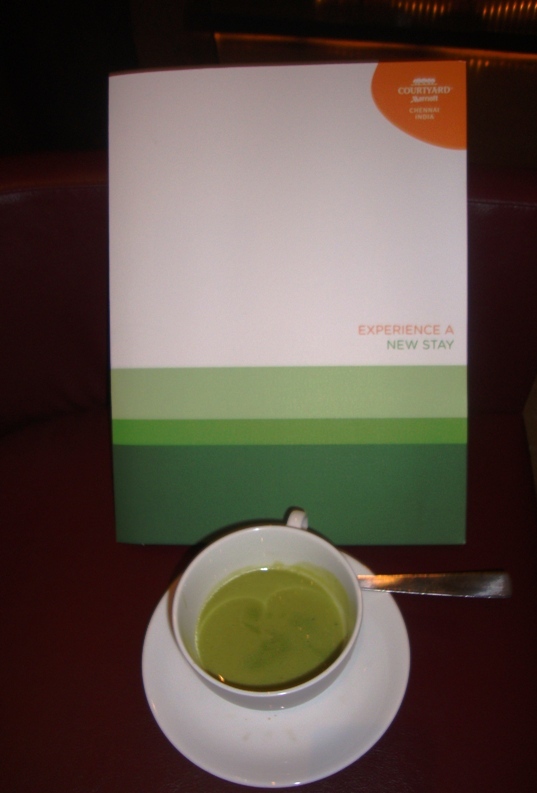 As the event progressed, few more
ladies joined in. A family of 5 came and sat near me. I struck up a
conversation to discover they were fairly regular and enjoyed cooking.
The Italian dishes were new, and they were not too familiar with the
herbs, and cooking process which is why they were there in full
attendance today. Oh
, no, the chef is already on to the next dish and he is talking about
Breasts, chicken Breasts that is [you evil you…].. He was going to
make “Chicken scaloppini with mushroom and truffle scented mash”. I
heard Truffle and my antenae was up and alert.. And to my glee, the
Truffle oil bottle was passed around so we could all get a whiff of it.
it was quite strong, almost like walking into the Chemistry lab, but i
liked it.  Good things are either forbidden or exhorbidantly pricey as
the case was. a 100ml bottle or even less was Rs10,000.. A drop was all
that was required and i felt it while having a spoonful of the mashed
potato.. Damn, that was divine. I also learnt about Truffles [i had only
seen it in the movie No Reservations], the Chef told us it was a fungi,
a kind of mushroom but the most expensive of them all. He also shared
the story of how back in the days, families would send their children
out to the garden to hunt and bring home some truffles. The mushroom
sauce was good, so filled with mushroom flavours [Chef had used 2 kinds
of mushrooms], so if you are a mushroom fan, you will be in heaven. 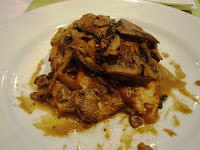 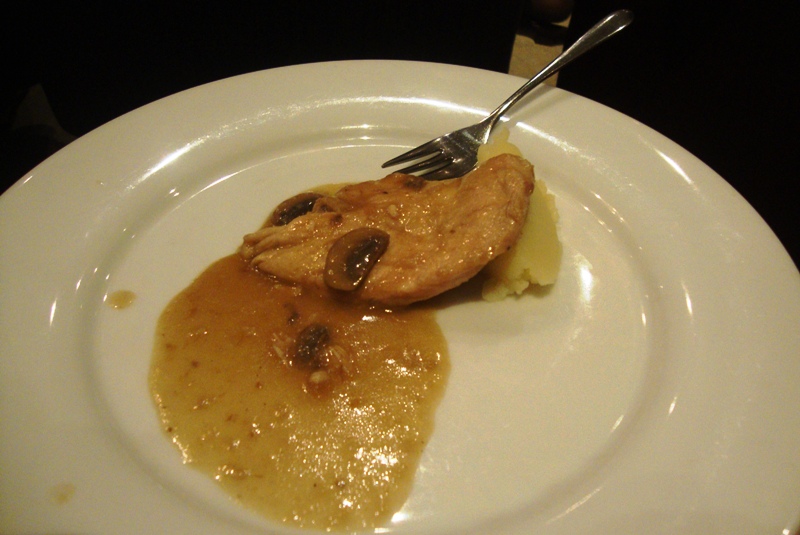 As i was relishing the mashed
potato, the audience was busy asking the Chef where certain ingredients
were available, and if there was a vegetarian substitute for Chicken
etc….it was wonderful to see the interaction, watch the participants
grab onto every word the Chef said, and be equally reciprocal with their
queries and feedback on the dishes. I
kept flipping through the list of recipes wondering if the Chef had
forgotten the Risotto.. Ah, but no. He had other plans, He mentioned
that this dish would be made at the end, and after the event was done
with, there would be a contest among the participants. The dish they had
to prepare- you guessed it right- the Risotto… He
spoke in length about Arborio Rice, and how Basmati rice will not work
in a Risotto. As always, he even passed around a few granules of Rice
for us to see… This was for the “Pumpkin and spinach risotto” Small
pumpkin cubes were boiled and pureed for the rice, and a few were oven
roasted to be added before serving. We also had the opportunity to
touch/feel/smell fresh herbs like Thyme and watch the mix of flavours
come together in the Risotto.. The Chef spoke about vegetable stock, how
it was prepared and what are the substitutes. A lady in the audience
enquired if stock can be made in advance and stored in ice trays to be
used later. The Chef replied “yes, but it will not be as fresh, an
alternative are those stock cubes you get in stores”. 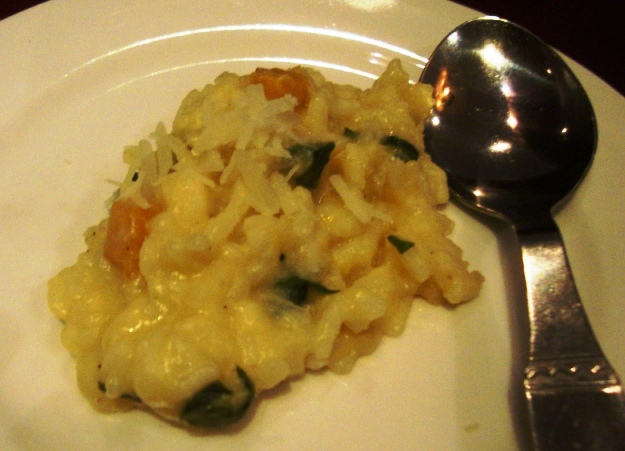 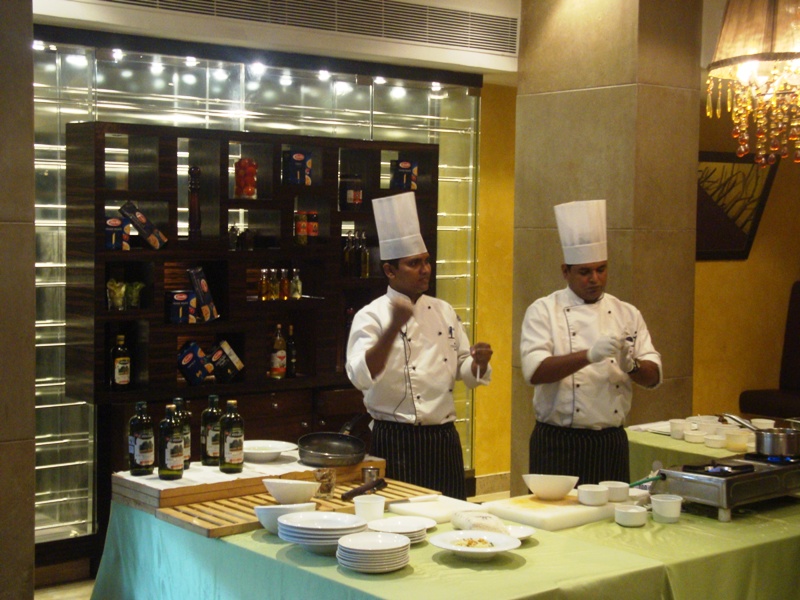 I had to leave as i had work and a
meeting in the other end of town. I missed out on the dessert Sicilian
Cannoli and lunch that followed. But, what can i say! It was one amazing
experience, to watch a Chef work his magic, interact with audience and
answer all queries. The lady next to me said “Chef is so nice, you can
even ask him other recipes and he will share. He taught me how to make a
simple pasta during the last session”. 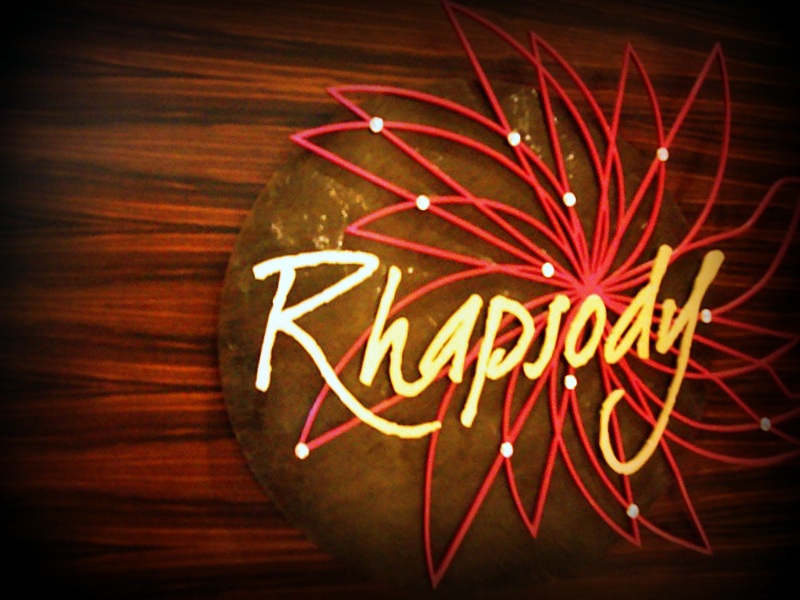 Each of the dishes were offered, a sample taster if you will call it just as the Chef was done cooking it. Waiters brought out trays of food, which were prepared in the kitchen ahead of time i guess. They were hot and yumm.. Well, looks like Marriott is bringing the foodies at both ends closer, the ones who love to eat and those who have learnt the art of cooking. This event is a monthly event, and the participants pay Rs750 nett, which also includes Lunch at Paprika post the Cook & Dine event. Am already curious to know what the theme is for the next session. As i leave the restaurant, the whiff of milk & vanilla tease me…
For details on the next Cook & Dine event, contact: 044 66764000