So, today i woke up to hear Uncle telling gramma something about the paper. Picked it up [The Hindu] to see an entire cover advertising Volkswagen… Suddenly, felt a buzz across the paper, and noticed there was a little black thing stuck on one of the boxes on the paper. 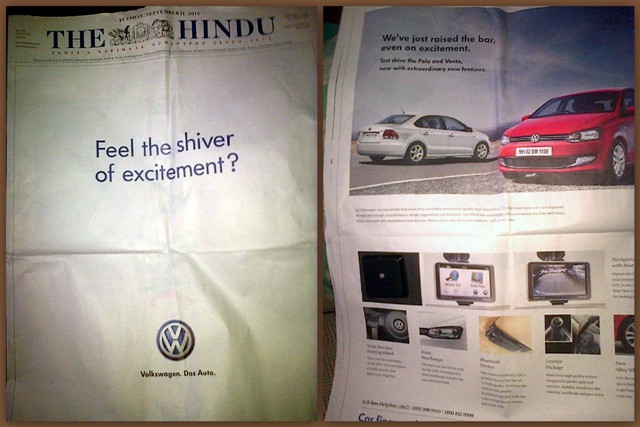 The front & back cover of The Hindu dated 11th Sep 2012
Interesting marketing by Volkswagen… but will this help them get buyers? I remember earlier too they had attached a small device with a recorded talking ad in the paper… it did get them attention, but did the sales increase? [They advertise in The Hindu & Times of India as well]
This time Volkswagen was asking people “Feel the shiver of excitement?” [which was placed on the front cover page of the paper] and the vibrater was probably meant to define the shiver… The various other features of the car was advertised- Navigation system with built in rear-view camera, multifunction steering
wheel, Bluetooth support, leather package, new wheels and much more. 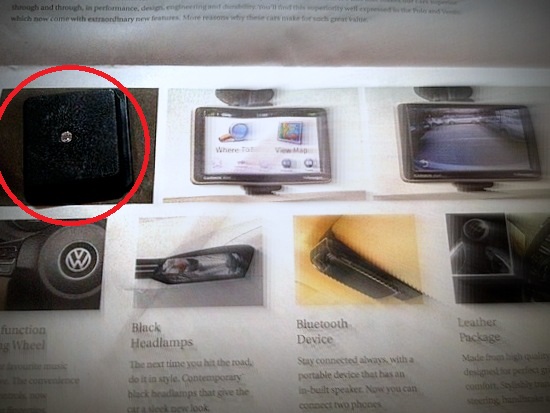 For people like my mom or gramma who had no clues about cars but for the fact that they were vehicles to take them around, this vibrator was a neat idea. Mom jumped when she felt it and they then began discussing where else this device could be placed . Uncle suggested putting it in the cupboard,so if anyone else tried opening they would be taken by surprise. Or maybe in the handbag…Gramma was wondering where else to place this device.
If you notice, they were all indeed captivated by that tiny device, but none of them were curious about the car or the brand that had come up with the idea to place it in the papers…I know they are just a minority, and I, on the other hand was wondering what this device had to do with the car, did they have it inbuilt somewhere, or what the experience would be like.
What VW was trying to do through this campaign- draw attention to the brand, have people talking about it for a while, and ofcourse promote the sales.. Did they achieve all of these?? I think they are half way there. People [i see on Twitter that it is trending] are indeed talking about it- irrespective of whether they liked it or not… But will it boost car sales? Only time will tell…

Umm, btw, VW you should reconsider the team doing SM for you…. I saw this tweet that had been RT’d by  a friend.. what was your SM team thinking? or not?