Chennai hasnt been this lovely in a long
time.. The weather was just perfect, we were sitting outside, near the
infinite pool, and the gentle breeze kept us company through the
evening. We were at The Crown in Residency Towers, Chennai. They have
introduced a new menu, limited items, but quite a few choices for both
the Vegetarians & Non vegetarians, an experiment they were running
for 2 weeks, a fortnight, and one that had received a response far
better than what they had anticipated. 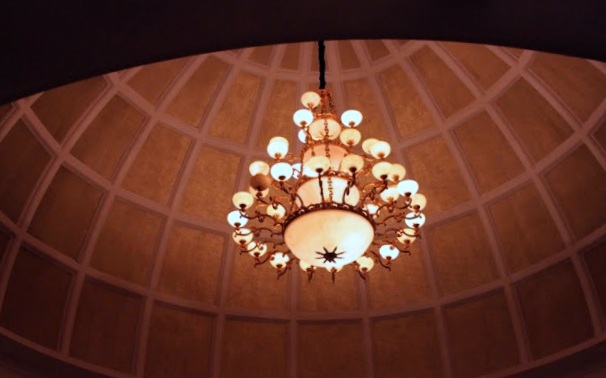 Chef
Shaktivel who chatted with us on and off told us he was quite surprised
at the response, especially since they had thought it being
Dussehra/Navaratri, crowd might not be that much. But, they were
pleasantly surprised. This menu had been introduced at The Crown in the
20th Floor & Southern Aroma on the Ground floor …
Vegetarian
meal was priced at Rs500, while Non veg was at Rs600. What did it
include? Soup, Main dishes, Desserts and one drink [
Gin/Vodka/Rum/Whiskey] and this menu is on till the 28th of October
So, there we were, the 3 stooges- Deepa,
Shadir and yours truly, all set for an evening of fun and good food…
Well, we were not disappointed… but did learn a few inside
information..  🙂
Ok,
time to get down to business, err food that is. While we waited for
Shadir, we decided to order a drink, both of us opted for something with
Vodka, and it was quite good, just that our drinks had a lot of orange
peels, which kept clogging up the straws and i requested the waiter to
strain the drink, which he did promptly.
Our
evening began with an elaborate selection of starters [ mind you, it is
not part of their Fortnight menu and was offered to us from the main
Crown Menu].. the 1st round was Indian starters – 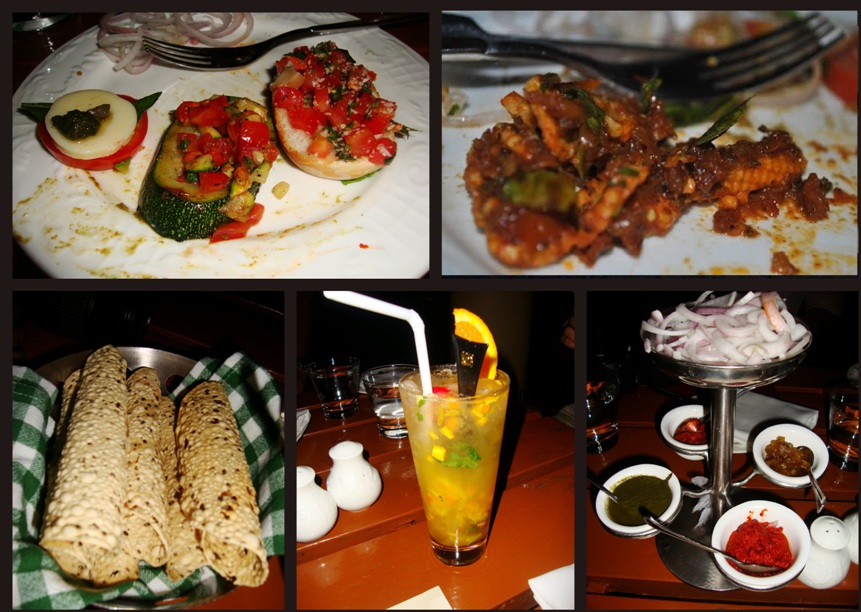 Stuffed mushrooms- which were
absolutely yumm- well, i do love mushrooms in any form and these were
cooked to perfection. The tandoori paneer &
cauliflower were good, and so was the Hara bara kebab. One other item on
our plate was  potato patty of sorts, it was a bit bland and had a
funny dosa dough texture. The chef told us they used chickpeas flour for
the outer coating [ as a policy they dont use cornflour or any starch]
Oh, how can i forget, we also got to taste some delicious baby corn
starters- cooked with tomatoes, curry leaves and spring onion, it was
gooood
Then came the platter of continental
starters- bruschetta with Basil & tomatoes which was good and
simple, stuffed zucchini – i loved this one and finally a slice of
tomato with a mozerella slice on top and a basil tucked between. It was
alright, nothing great.
Shadir was having a feast, with his plate piled on with a wide variety of meat starters, and he seemed to enjoy them all.. 😉
Phew..
we were quite stuffed, and so requested the chef to bring us just a
sampler of the main dishes. We had quite an interesting chatting session
with the Chef. He was curious about how we write reviews, especially
since  we were not catering students or had catering backgrounds. We
explained how we wrote reviews, clarified any doubts we had while at the
review and the main aim of writing the reviews. Shadir also showed a
sample of his blog, explaining the post, style of writing, purpose of
the blog and so on. Even though some questions from the Chef surprised
us, we were glad to have had this open chat with him.. Showed that the
review mattered to them, a lot.
And
it was time for the main dishes… They arrived in style, laid out in a
make shift table next to our seat. There were 3 types of Indian Bread –
Garlic naan, plain naan and stuffed kulcha . Alongside were 4 side
dishes – Dal makhni [my favorite],  Rilli milli sabzi [with mixed
vegetables], a paneer gravy
and one more mix veg gravy. We also got to taste Vegetable Biryani,
served with onion raita. I enjoyed the Garlic Naan, Daal makhani and the
biryani was not bad. The Paneer was  bit rubbery, and the other dishes
were a bit salty [tangy and pulips]… 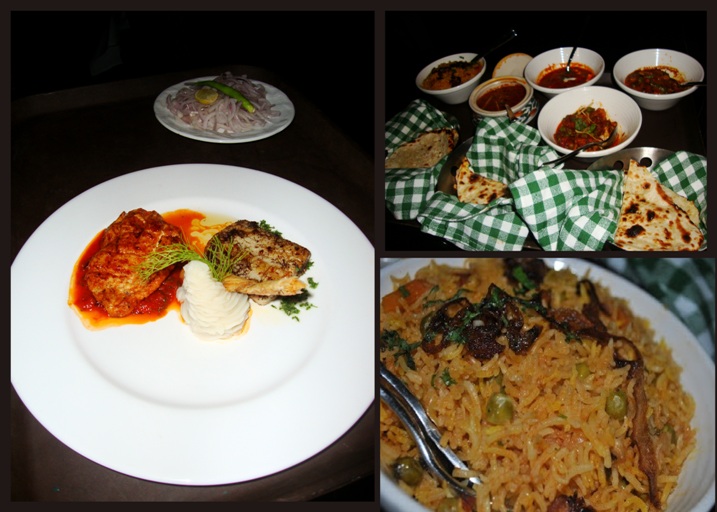 Oh  boy, we couldnt get enough of the
lovely view and the amazing breeze. As the chef spoke to us about
Desserts, we nodded happily, requesting they bring one of each, while we
sat back and enjoyed the breeze. The ambiance is to die for, especially
in a city like Chennai, and combine it with pleasant weather, and you
are in heaven….
First
to arrive was a long white plate with different desserts neatly laid
out- There was an apple crumble [yumm, need you ask], mudpie[ was it
made of bitter chocolate?], Kala jamun[ cut into 4 pieces and served on a
spoonful of rabdi] and finally, the Cheesecake with blueberry sauce..
No two ways about it, my favorite was the apple crumble… There was
also a rasmalai, which was fresh and divine, but i am not a big fan of
this dessert. And last but not least, came the brownie sizzler served on
a single slice of pineapple[ the big puzzle that went unanswered was
why the waiter placed a small cube of salted Amul butter as he placed
the brownie on our table and why we dint get chocolate sauce and the
whole drama] 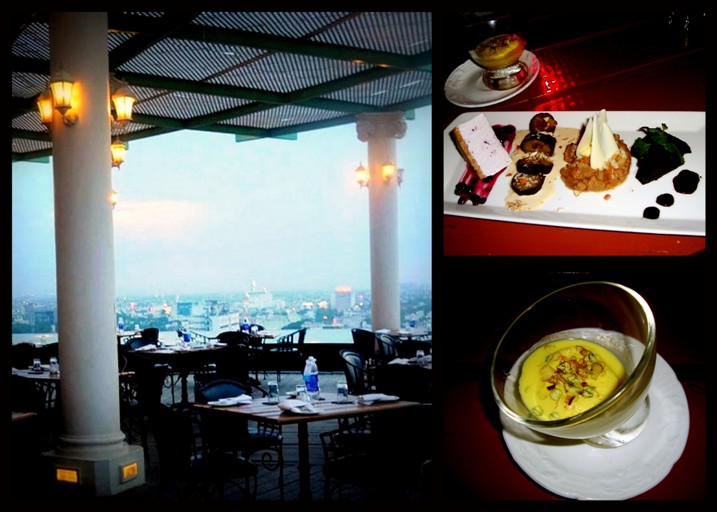 We stuck around for a while longer chatting with the Chef, while he explained their menu, plans for the coming festive season and new changes we should expect to see soon at the restaurant. He also gave us a small tour of Southern Aroma before bidding us good night.
As always, it was a fun evening… the 3 of us spoke about the others who were missing, and of how each experience is different, interesting and amusing….
Would i recommend you visit The Crown? Absolutely. Apart from today evening, have been here couple of times earlier, and all my experiences have been good.. Make sure you go on a day like today, sit outside, enjoy the lovely ambiance while sipping on a drink and enjoying some good food.
Address:
The Crown
20th Floor, The Residency Towers,
#115, Thyagaraya Road,
T. Nagar
Chennai- 600017
Ph: 044 28156363

This was part of a CFG Showcase that I attended and was conducted by Chennai Food Guide.
The reviews posted on this blog are based on my personal experience.
Also remember that restaurants and eat outs sometimes change with time,
so does their food and service. So, kindly consider these factors while
visiting the places. Remember, no two palates are the same. Bon Appétit  🙂