There we were, partying away amidst friends and strangers, while the clocked ticked away. Around 11pm, a friend came over and called us aside. “The cab is here and so is R, quickly have some dinner and we shall hit the road”. Where were we off to? We were going to go on a road trip to a few places, not too far yet not too close.

We were in Delhi, and our agenda was to visit Ajmer, Pushkar, and Jaipur over the next few days. I had travelled from Chennai to Delhi, while A had come from Bombay and D from Bangalore. R was D’s friend from Delhi who had initiated the plan. It was supposed to be D & R doing a trip, but we girls had invited ourselves to the gang…

Around midnight we hopped into the cab after shifting our bags from the friends’ car to the cab and got set for the journey ahead. R told us we should reach Ajmer sometime in the early hours of the morning and that we should get some shut eye during the drive. We did, probably slept for about 2 hours, but luckily we were neither hungover from the party nor groggy from lack of sleep. We reached Ajmer around 5am, and the car came to a halt within walking distance from the Dargah. The men told us to stay put in the car while they scouted for a “decent” room. It was so sweet, they would go up and down hotels, checking out rooms, coming back to give us a quick review of each. During the wait, quite a few women and children came knocking on the car windows begging. One woman refused to go and kept throwing curses at us as we dint offer her anything.
Finally, R came over and said “there is a nice hotel few buildings away, but there is only 1 room available”. The two of us chimed in ” oh, cool, so lets take it”. R was stumped ” you gals are ok with that?” .. “yep, we are just going to shower, freshen up and head out, so no big deal” we replied. He dint quite get it, but i guess was glad that his running around was over. We spent about an hour getting ready and then landed at the Dargah’s door steps. Out of the corner of my eye i spotted that beggar woman sitting near our car giving us angry glances… I wondered if she was going to haunt us till we left Ajmer. Breaking into my thoughts, a man wearing a white kurta pyjama came over, introduced himself and said he would be our guide. He insisted we girls cover our heads with our duppattas, while the men had to purchase a cap [doppa- hope i got the name right] and also asked us to purchase a few items at the store within the Dargah Complex.

The Dargah [Tomb of
the popular 13th century Sufi saint, Hazrat Khwaja Moinuddin Hasan
Chisti] campus was huge. It is the place where the famous Sufi saint
has been buried and is a placee where people of all religion visit. it is said that you pray here and your wishes shall be fulfilled.  I was reminded of Jodha Akbar and the song “Khwaja mere khwaja” where all the cast is wearing those long flowy gowns and tall caps, twirling.. The guide kept rambling on, he told us that Chaddar, Neema and Ghilaph are the most common offerings made by devotees here.  I
tuned out and started observing the place, the architecture and the
people who seem to be everywhere. The entrance is richly decorated with
gold and enamel work as
well as with Belgian crystal chandeliers. As
we walked towards the main part of the Dargah, we noticed quite a crowd
milling around. There were also many standing within the center [almost
like priests in our temples calling out to devotees, collecting the
offerings and then demanding money].. pretty much the same thing
happened here. We were asked to walk around the main site and then offer
money, and told that 500 or 1000 was the best offering… ;o) [ya
right, God wanted nothing less, am sure].. The view of the tomb  from the room we used
The guide also told us that the crown on the tomb’s
summit is made of solid gold and the open
space in the foreground is a mosque built by the Mughal
emperor Shah
Jahan. I also saw a huge well of sorts near the entrance,
where we noticed sand filled 1/10th of the pit and on top of it was
money, coins, jewellery, clothing, and just about everything else you
can think of. This is where people made their wishes,  and on top of the
well was a long rod that was fixed from one end of the mouth to the
other on which people had tied little things with a thread- shoes, keys,
boxes and so on. Depending on your wish, you could tie something or
drop in some money into the pit. 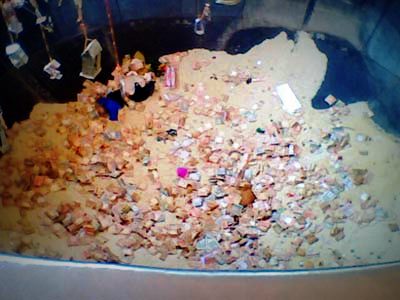 As i walked around, i couldnt help but notice the small
hillock behind the Dargah, and that the land seemed to stretch forever.
There was a small village of sorts behind the Dargah, and people were
walking in/out/ from every direction possible. It was amazing.. And here
i had thought this was a dead end road with the Dargh being the last
structure on the street. After spending nearly 3hours, the lack of sleep was finally catching up and we got back to the car after saying our final prayers. I wondered what lay ahead on our journey as the car exited the narrow lane.