Ispahani center, a place that i wish existed during my college days. A place that had quite a few interesting stoes and coffee shops, a place that was among the 1st mall to enter the city, a place where i used to work out. Today, it is a mall, rather so called mall that has quite a few eat outs and a few shops, but is pretty empty most of the time. Looks like Express Avenue has taken over, it is now the new honeycomb attracting all the bees…

As decided, I arrived at Ispahani center before 7.30pm only to see the others already there, well almost all of them. There were a few new faces, but familiar names and we said Hi hello and connected. Soon, the table was full and one of the staff brought over a hand written menu. It contained a list of items that they had on their menu, most of which were new. He was going to give us a taste of as many as possible. For once, i noticed the number of Vegetarian items beat the Non veg ones hands down. Whoopie.. [ya ya, small pleasures] 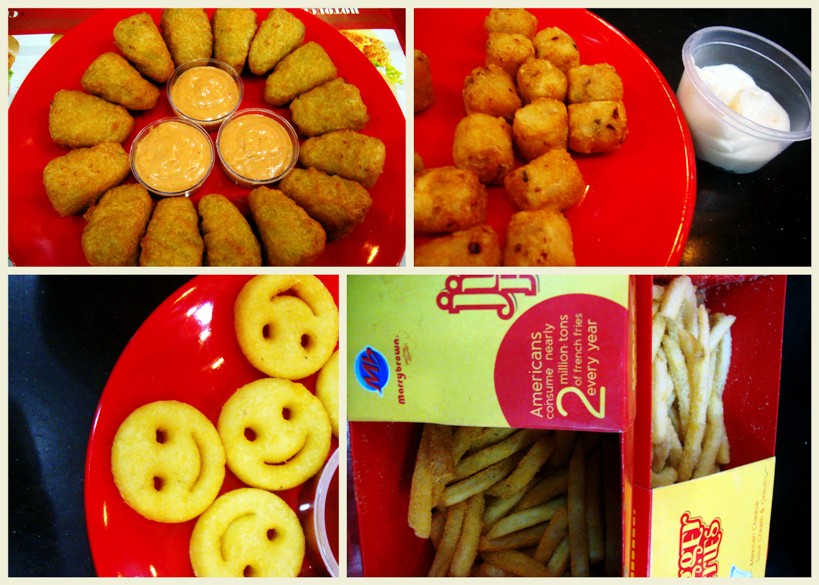 So, what did i like the most of the stuff i tasted?

Jigger Fries – these are french fries with a difference- there are two flavours- Mexican spice and Sour cream & onion. Reminded me of the popcorn in Sathyam cinemas where you can add flavours to the popcorn. Only suggestion was to not dunk so much of the spice in the fries and maybe to add this to some of their other dishes as well.

Chilli cheese poppers- These were like mini bombs, mini chilli cheese fried starters that were quite good. Served alongside a tangy spicy mayo sauce, they were quite yummy

Xtreme burger- Yep, I had a burger after what seemed like ages. This was a simple veggie burger with corn and black pepper [the pepper hits you on the 1st bite and it was different, the patty had a nice crunchy exterior and the bun was also nice & soft]. The burger was easy to eat, it dint have mayo oozing out of the sides or lettuce/onions slipping out as you struggle to take a bite 😀

Mango Shake- This was quite thick and quite nice, refreshing. It was made with mango puree and vanilla ice cream blended together. They have now introduced not one or two but 6 flavours in this 🙂

Few other dishes that were served up for us veggies were,

Veg Chilli poppers- these were little nuggets made with veggies and
chilli flakes, served with basic mayo sauce – was quite bland, couldnt
feel the heat of the chilli flakes

Cottage cheese burger – forgot the name, it was ok, since we were full, I
brought it home and felt the patty was mushy and bland. 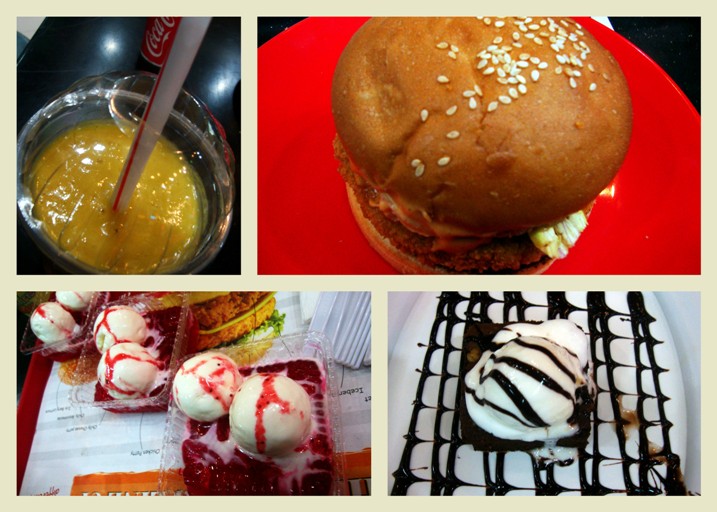 What? you are bored of reading all the veg dishes? well, you have to wait your turn. For those on the other side of the fence, that is, the non veg eaters, they got quite a few options, but most felt the dishes all tasted similar, and were quite bland… What did they gobble up?

Chicken Poppers
Buffalo wings
Chicken lollypop
A tub of what looked like fried chicken drumstick/wings and
Hottop burger
anything else? you should check Divyan’s blog post

No desserts? Damn, nothing gets past you eh!! Well, we did get 2 different desserts, but unfortunately they were no great shakes.
There was the jello with ice cream and Brownie with ice cream. The former was ok, esp since i like jello but the Brownie was just weird- it was hard, dry and tasted like Threptin biscuits. I did see a spoon break and another little piece fly towards a customer… Looks like they need to relook at the recipe or look at an alternative.
Overall rating- 2.5/5
Will i go back again- Not really, not unless there is a kid or someone who demands a burger or french fries when am wandering around Ispahani or near a Marrybrown….
Address:
Ispahani Center, 123-124 Nungambakkm High road, Nungambakkam, Chennai.
Phone: 044 28332922, 42032923.
They also have branches across the city.

This was part of a CFG Showcase that I attended and was conducted by Chennai Food Guide.
The reviews posted on this blog are based on my personal experience.
Also remember that restaurants and eat outs sometimes change with time,
so does their food and service. So, kindly consider these factors while
visiting the places. Remember, no two palates are the same. Bon Appétit  🙂