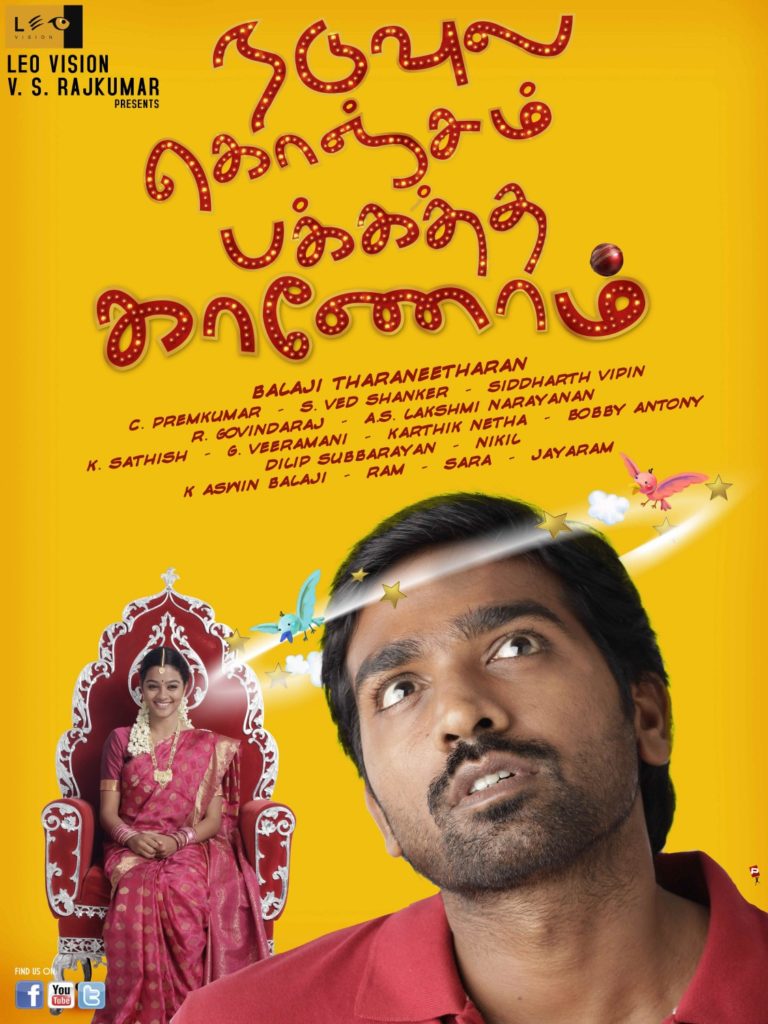 .
Am talking about “Naduvula Konjam Pakkatha Kaanom [NKPK]” . I had heard of this few months ago when my friend announced that her student was doing the music. Few days later, i got to hear the songs in her CD and fell in love with them instantly. The lyrics, the style and the tunes were all so catchy. Esp the Oh Crazy minnal song by Andrea.
And finally, the movie had hit the theaters and was getting good reviews. The only thing that stuck in my head was that none of the reviews mentioned the music, the songs… Anyways, paying no head, few weeks ago, I booked 2 tickets, dragged mom and went for the movie [ we watched it in Sangam cinemas, PH Road].
NKPK is a story about Prem Kumar (Vijay Sethupathi) who has a small accident while playing cricket with his friends Bagavathy aka Bugs (Bagavathi himself), Saras (Vigneshwaran) and Bajji aka Balaji (Raj Kumar) and loses his memory[the last one year]
Enna achchu? Oh, namma cricket vilayidinom..
Nee ball potta
Nee thaane bat panina?
Naa pidikka ponein..
Oh.. vitutena??
Kal thavari keezha vizhundutein..
Inga thaan adi padiduchu.. anga thaan medula oblongeta irukku
Shockla short term memory loss aayirukum
its ok, athuva sariya poyidum..
Watch: Trailer
This is a dialogue you will hear atleast a million times, well, i exaggerate, but atleast 30-40times through the movie. But, you are not wondering why they are saying the same thing!! You are completely tuned in gasping and watching intently.
Vijay Sethupathi [Prem] is brilliant throughout. But his three friends
have acted just as well, they have kept the plot going, had us all guessing what is going to happen next…   The brilliant casting and acting is the highlight of this movie. Agreed, some scenes seemed weak, but they all tie together beautifully. We were in splits through the movie, we understood why the dialogues were repeated, and we wondered what will happen to Prem and his wedding, will he be able to go through with it? Oh and this is the 2nd most amazing scene in the movie- the wedding scene…Vigneswaran [Saras] simply rocked…. The entire theater was howling with laughter and it dint stop till the very end… 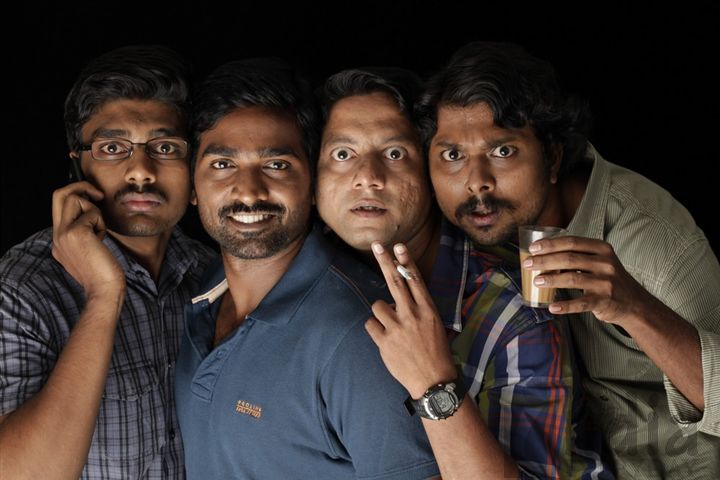 Even though i missed the Oh Crazy minnal song, it made sense to have kept it off, the movie dint need songs at all.. The 4 guys stole the show…. Naduvula
Konjam Pakkatha Kaanom was a pleasant surprise, and it is a huge success, even though none of the cast are popular, nor did it have any item numbers or masala. Shows that different genres also work, especially when directed well..
A must watch for tamil movie fans….
I would rate it 4.9/5 🙂