Ah, the 1st showcase in 2013. Well, i was looking forward to this one as we had visited another Restaurant under the same group- Chao and the experience had been anything but delightful. But it was an evening of surprises, good and otherwise. While it was lovely meeting the regular suspects, i realised how close we had all grown over the year, and the bonds developed between some of us stronger than others. 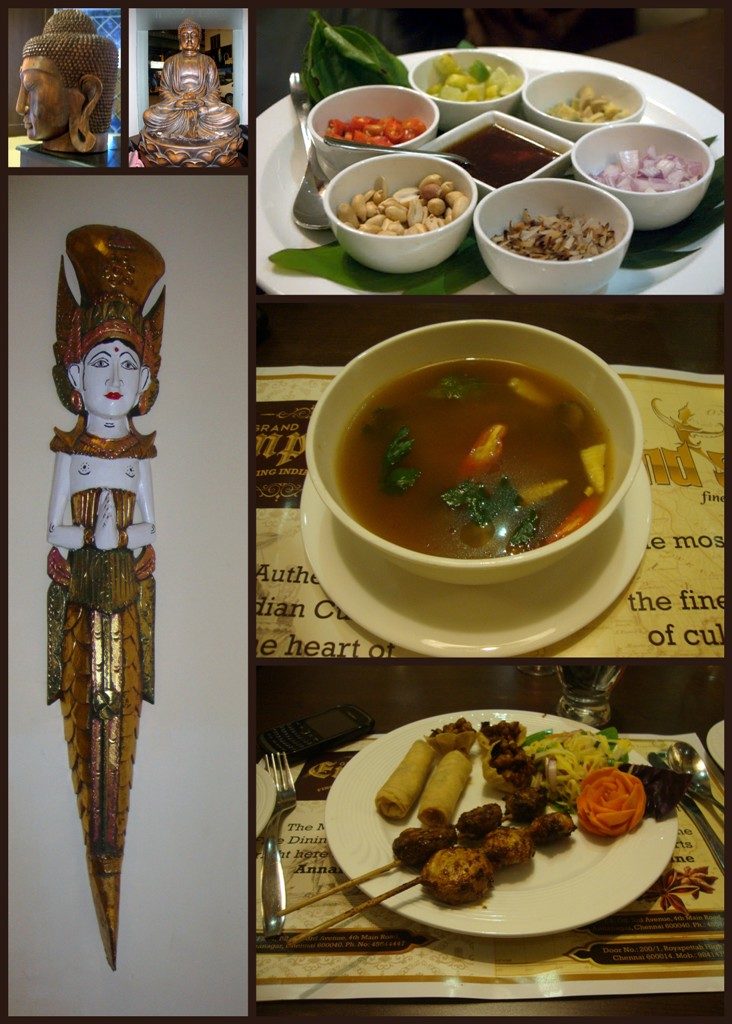 The 1st thing that struck me about Grand Siam were the Buddha idols placed across the restaurant- there was one on the maitre de’s table, a bigger Buddha with a mini fountain of sorts in the main lobby and then a few small ones in alcoves across the place. The decor was quite pleasing and the lighting just right, not too bright nor was it dark and dingy. The place looked small on the outside, but upon entering i noticed it was quite large and i also got a glimpse of the neat kitchen. The tables had a vase with a single strand of Orchid on them, reminding me of another restaurant. I noticed couple of others sipping on a drink that had a strong ginger flavour, and passed up on it. The 2nd one that came around too i nearly missed but for a few sips from KK’s glass. It looked pink, had fizz and a green Shark stirrer dunked in it. I called it the Shark suicide point 😀 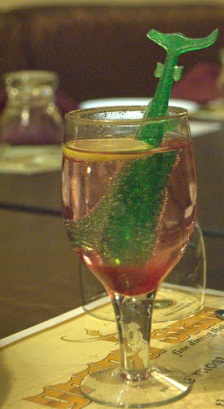 We were given a long table on the right side f the restaurant, and we seated ourselves after a wee bit of debate on where the vegetarians will sit and non vegetarians will. We were 6 veggies, and well, the night seemed long and tad frustrating. The traditional meal opener was served on the table-Mien Khem- a plate with a few baby spinach leaves- coconut shavings, onion, peanuts, red chilli, ginger, lime pieces and jaggery syrup. You serve yourself all that you like on a baby spinach leaf, fold it and eat the whole thing. It is quite yumm and we had a few of these while we waited for the soup.
1st came the Tom Yum Phak soup- a light vegetable stock with veggies [baby corn, carrots, broccoli, mushrooms] cooked with Thai herbs and spices – galangal, lemongrass, red chillies, kafir lime leaves.. It was very watery and not as spicy as what i’ve had in other places. The major let down in the soup were the mushrooms, as much as i love them, i felt the ones in the soup were beyond their date and therefore were chewy and had a smell.
Following this, we saw a plate with an assortment of starters- corn tartlets, spring rolls and mushroom in skewers served alongside a good portion of Raw mango salad. The corn tartlets were good, spring rolls were a bit bland, but tasted good with the peanut sauce. The mushrooms once again were a let down, they had a burnt taste and lacked flavour. The salad was divine, i could have had a bowl of just that and been happy with the meal 🙂 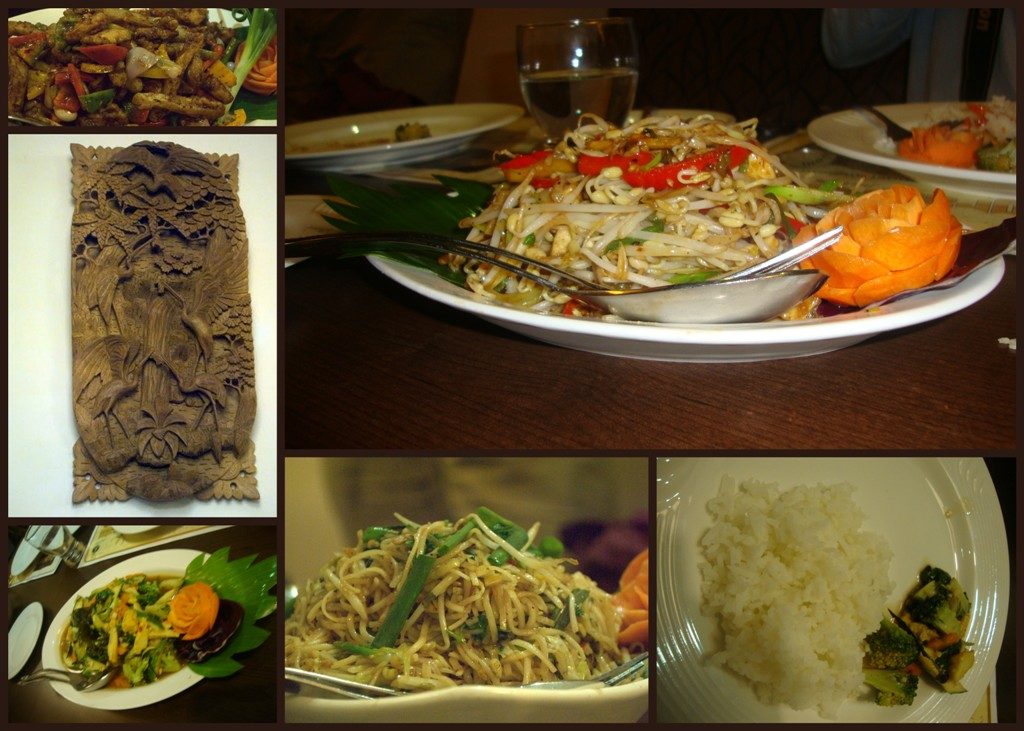 Through the meal i must have had a jug full of water, or even more, that is how spicy some of the dishes were. And i had to keep beckoning the waiter to fill up my glass. Moving on, the mains on the non veg side started arriving while we waited wondering what was in store for us. Between meals, we got the chance to speak to the Chef, share our opinions and feedback, and hear his side out.
For the mains, we saw a bowl of plain rice arrive, a Thai Green curry[ wonder why they add brussel sprouts, it kinda alters the taste adding a touch of bitterness to the dish], a stir fry salad with the tofu and sprouted beans[ which was yummy], a stir fry of veggies [ felt a bit soggy, and broccoli was definitely overcooked] and a bowl of noodles [ i dint taste this but from others learnt it had a strong spring onion flavour]. Oh and there was also the plate of deep fried potatoes and baby corn tossed in a thai sauce [ was good, but the potato could have been sliced smaller]. I had a few spoons of the rice with the different side dishes and the sprouts salad stood out, in terms of texture and flavour. 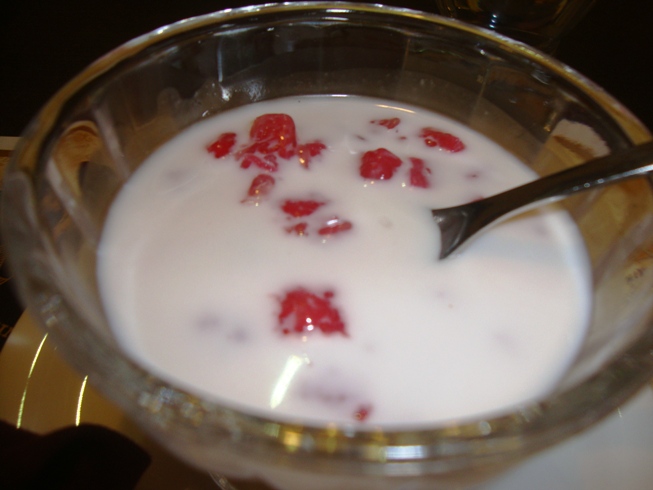 It was time for dessert, for once i skipped the cup of Lemongrass tea, diving into the bowl of Tub Tim Grob [Water chestnut in coconut milk]- it was good, but i must agree that i have had better ones. We heard there was also another dessert on the menu- Pumpkin pudding with coconut ice cream, but alas dint get to sample it.
Address:
1/200, Dr Radhakrishnan Salai,
Opposite Maruti Suzuki Showroom [next to Duchess & Kabul]
Mylapore
Phone 044 45568323

A meal for 2 [vegetarians] would cost close to Rs600. This was a pre set menu served to us.. Shall update cost of this shortly
This was part of a Chennai Food Guide showcase conduced by Chennai Food Guide and so i am not going to rate the place. But i will tell you this- if you are bored of the usual Thai restaurants, give this one a shot, and do let me know what you thought of the food/service/ambiance/price.  All i shall say is the Restaurant needs to notch up their service, pay more attention to the dishes and they will see more crowds at their doors vying for a table!

Remember- This was just my review of the place, my opinions might vary from yours. And the dishes might change, so will  other factors!