How are you doing today?
Just peachy!
Well, this is what
came to my mind when I heard of the pure vegetarian restaurant called Peaches.
But then, it was in the other end of the city, Velachery. Well, yes I do know
it is not the other end, but for someone living in Chetpet, making the commute
it sure feels like another corner of the city. However, now that I have moved
to somewhere midpoint, it does not seem too far. And so, I braved the traffic
and made the trip to Peaches that evening. I contemplated bailing out using the
excuse of “I just got back to town today morning, am exhausted” but then
decided to just go for it.  By the time I
reached, most of the others were already there. After a round of introductions,
Hi hello to familiar faces we all settled into the tables set aside for us.

Kaushik gave a brief intro to the place, the cuisine and also told us of the Burrito challenge they were rolling out. The challenge was to plough through a 2kg burrito within 30 minutes. A few brave souls took the plunge, but none were able to complete it, but then came the Man who was done within 18mins and set a new record. Anyways, I digress. Coming back to the evening, we were in for a lavish feast, what else would you call a meal comprising of 22 dishes. Yes, you read it right. There was a soup, couple of starters, few Indian main dishes, and few from other cuisines and then the desserts. Phew. Just listening to him rattle out the list was exhausting.

The evening opened with the Roasted Red pepper soup that was served with a slice of toast and cheese on top. It was interesting. I liked the soup, and like the croutons in the tomato soup, this slice of toast was a good break of texture for this soup. By the time we were done, I spotted a plate of onion rings land on the table. We were told these are traditionally cooked in beer batter, but here they were cooked with soda. They were light, a tad bland but tasted good with the chilli mayo dip. The Aloo tikki followed on the heels of the onion rings and this was divine. Served alongside the traditional mint chutney, it was yumm. Before we could gulp down a glass of water, a plate of breaded mozzarella sticks came dancing in front of our eyes. For those who love cheese, this is a delight. The cool thing about this place was they served us shots between every few courses. We had the Florida Sunrise [a nonalcoholic version of the drink] in a small cute glass. It kind of helped, we got to break the food train and get a different taste as well. 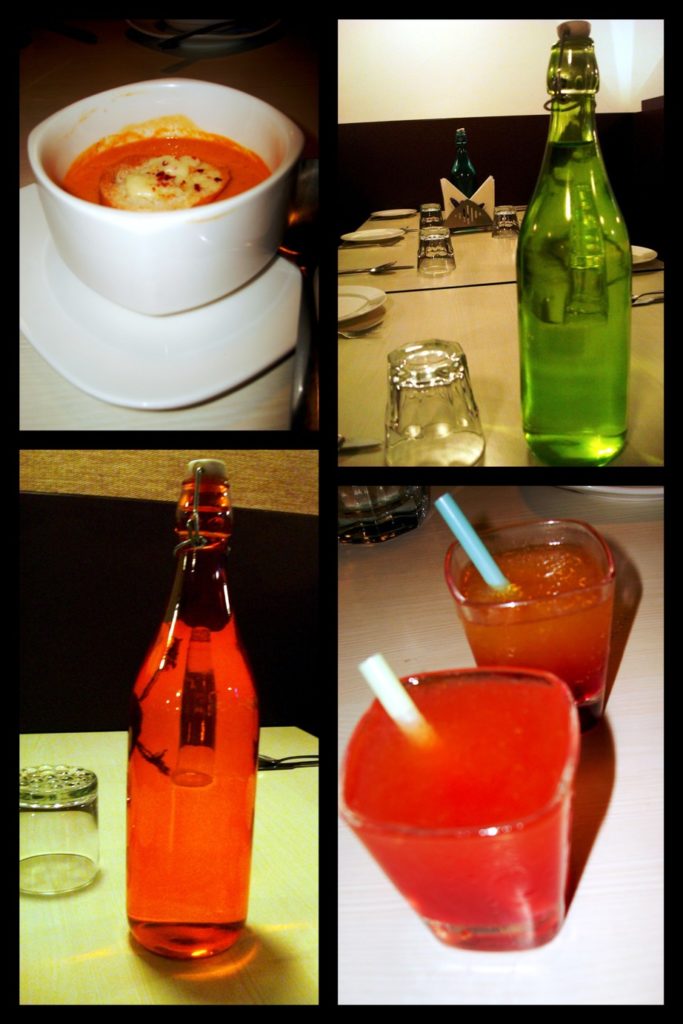 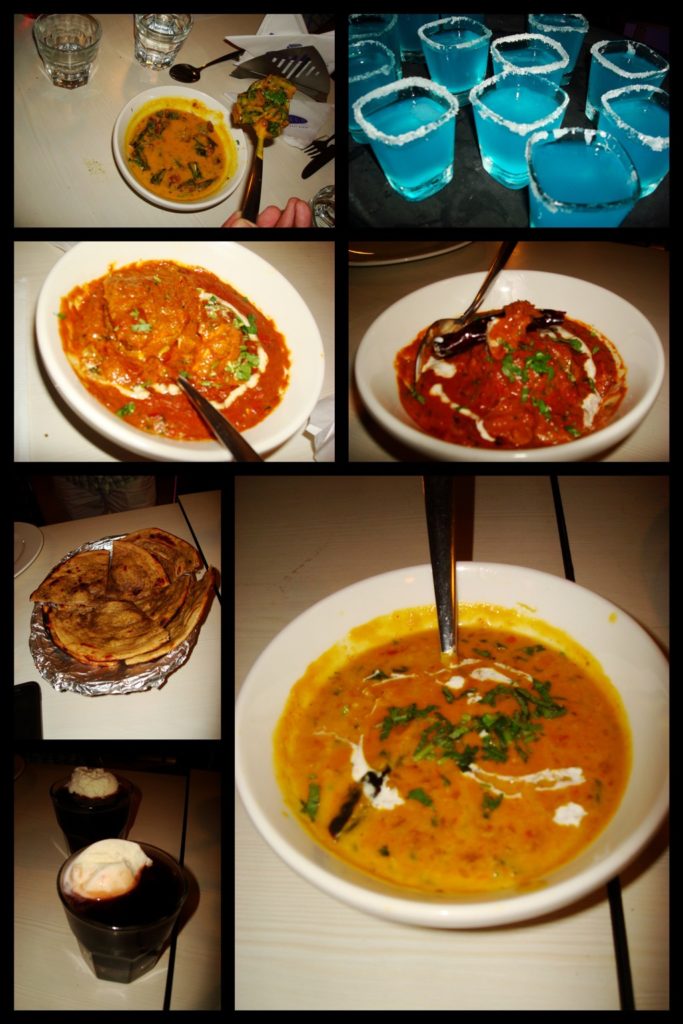 Wait, we are not done with starters. Told you we were in for a 22course delight right?! Next came the Aatish-e-aloo, very different from the aloo tikki. And then were the 2 Mushroom starters- Tapas Mushroom, mushroom stuffed coated and fried. This was my least favorite of the lot. There was also the corn cheese balls and  Sabz tandoor [carrots, potato, zucchini, cauliflower, capsicum] which was very good. We were told the spice factor was kept to a minimum and there was an extreme HOT version available if anyone dared. The next drink had us all excited like little children. Any guesses? It was bovonto served with a scoop of ice cream. We must have gulped through quite a few glasses of this. It was sheer heaven.  Hang on, what is your hurry? There were few more starters yet to be sampled. The Super spicy chilli  mushroom  and Phuket Paneer. The mushroom was alright, and paneer felt a tad chewy. It was a take off on the Phuket Fish. We looked around waiting to see if more starters flew from the kitchen, but luckily that was it. Phew. Suddenly, a waiter walked in with a tray of mini blue colour liquid shots. They looked good, and tasted quite good as well. These were called Deep Blue Sea, and were a take off on the Blue Curacao. I loved the fact that the glasses had salt on the rim. It helps in cutting the sweetness of the drink. Given a choice, I would do this to every drink in the world 😀 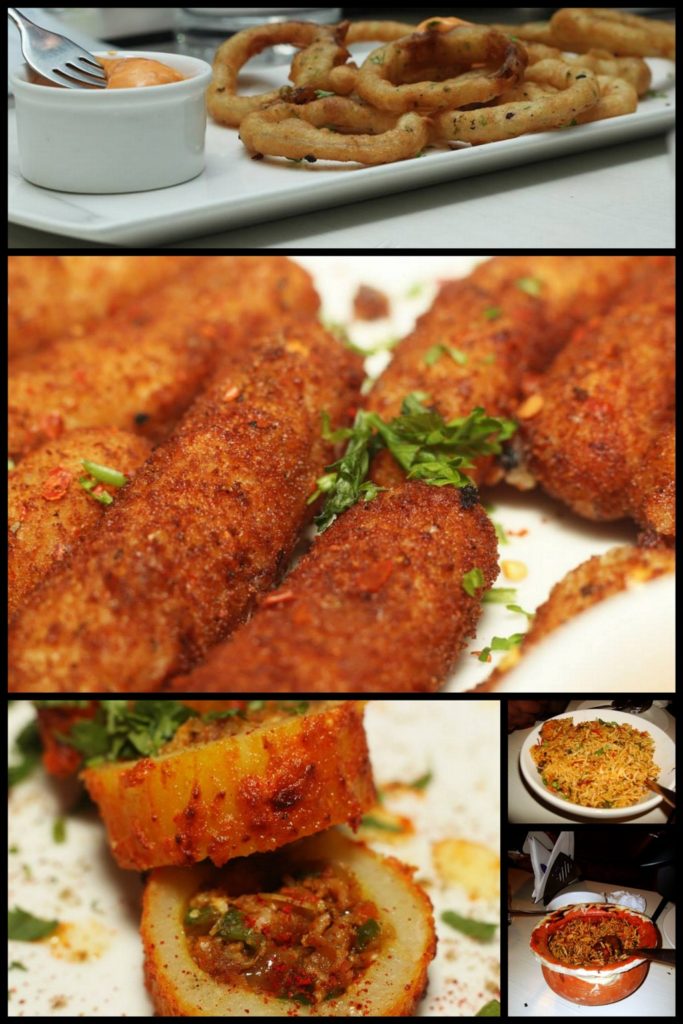 Taking a break, we walked around;
some took charge of the Burrito and attempted to eat it, while others cheered
them on. And then, we were beckoned back to the table for the Indian mains. We
had an array of Indian breads, of which the methi and black olive stood out.
The Bharwani Mirchi Kolhapuri was interesting, hot chilli with sweet paneer
stuffing, but then came the Bhindi khadi that swept us away. It was just
amazing, perfect with plain rice. We tried the kofta Biryani and Ambur Soya
[veg] Biryani with the Dabeliwali Daal and Paneer tikka masala.  These dishes are good, but I was busy licking
the khadi off the spoon. J

Following these were the Lasagna
and Enchilladas. However, I had a long night ahead and so had to leave. I
missed these and the desserts, especially the Nuttella Wontons which I heard
were quite good. Oh, well, always an excuse to come back for a visit, right?
This is one of those places you
can walk in, and be assured there is something for everyone. Situated above
Andhra Bank, it is about 1 km from Phoenix Market City, Velachery on the left
side.
Peaches
No.81, 9th Cross Street,
Rajalakshmi Nagar,
100 Feet by Pass Road,
Velachery, Chennai,
Tamil Nadu 600042
Ph- 044 4201 9454
Disclaimer:
The reviews posted on this blog are based on my personal experience. Also remember that restaurants and eat outs sometimes change with time, so does their food and service. So, kindly consider these factors while visiting the places. Remember, no two palates are the same. Bon Appétit  🙂