If someone
had told you that you could dine under the stars, enjoy a Tagine, you might
have looked at them as if they were speaking a foreign language. Well, it is
possible. All you need to do is head over to Taj Club House and go straight to
the rooftop restaurant- Kefi. You will see what we are talking about…. 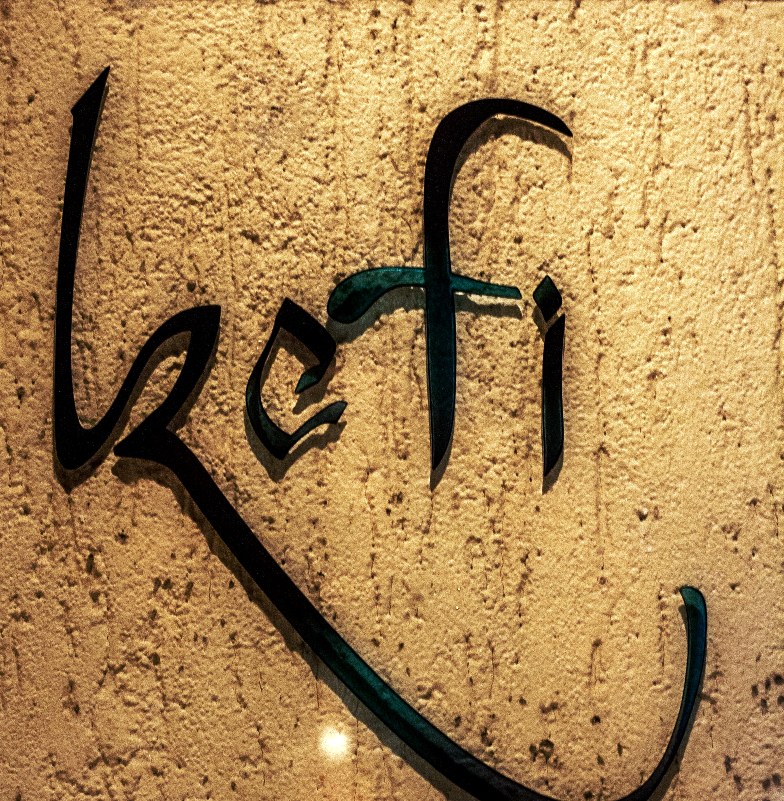 There is
both an outdoor and indoor seating area, and if you are lucky and if the
weather is good, you could enjoy  a glass
of wine with the cool breeze keeping you company. Else, you could sit inside in
the air conditioned area and dine in style. 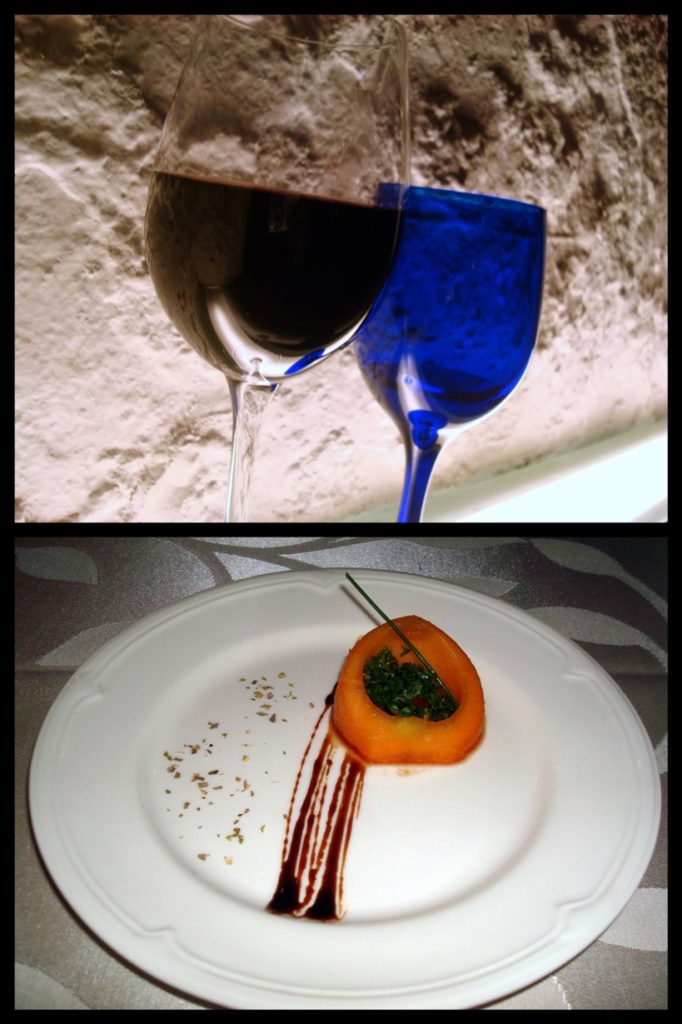 We got lucky during the Levantine lounge, the weather was pleasant and so we sat outside. But this time around, the days were proving unpredictable, there had been bouts of rain in the evening and so we decided to dine indoors. We chose the corner most table and got comfortable. Chef Siddiqui came over, introduced himself and explained a bit about the menu at Kefi. We noticed the staff bringing over plates of what is called “Amuse Bouche”. Name is amusing isn’t it? These are little bites that the restaurant serves, complimentary to get the evening started. Chef also mentioned that it gives the team some time to prepare the soups/salads/starters ordered.  We were served Cassis Reduced Melon with mint tabouleh[green greek salad made with different kinds of herbs, tomatoes and cheese]. It was quite refreshing. We then took time in ordering beverages and drinks. I opted for red wine, while the teetotalers chose mocktails. 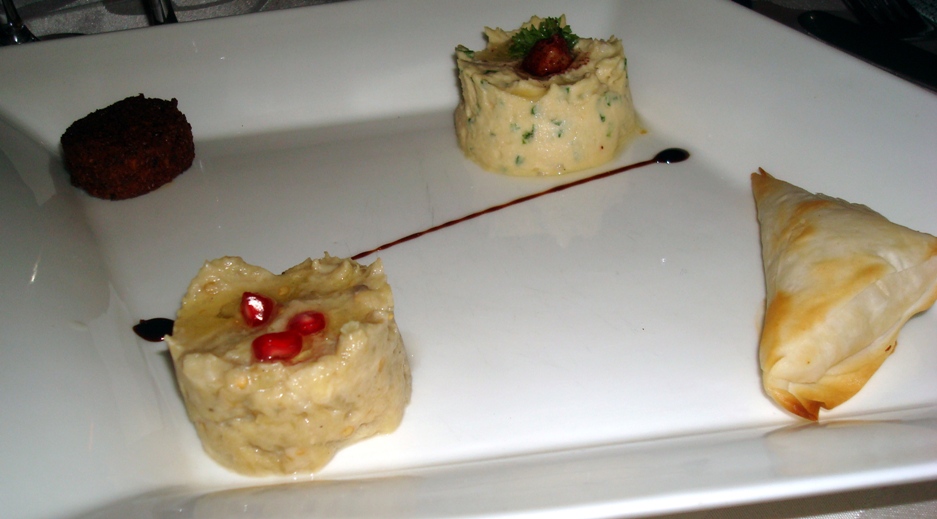 Then came the Mezze Sampler, it consisted of Hummus beiruti [Hummus topped with onions, tomato and parsley], Moutabel (Char Grilled Aubergine with tahina sauce), Spanakopita (Baked pastry triangles filled with spinach, feta, and pine nut), Falafel (Deep Fried Chick pea) while the non veg eaters also got a Sambusek (pastry crescent filled lamb and pai nuts) These were served in large rhombus shaped plates, very neat and simple flavours. Familiar and refreshing! As the conversation flowed, so did the wine and laughter. We were busy clicking photographs, chatting up on life, and general yapping. 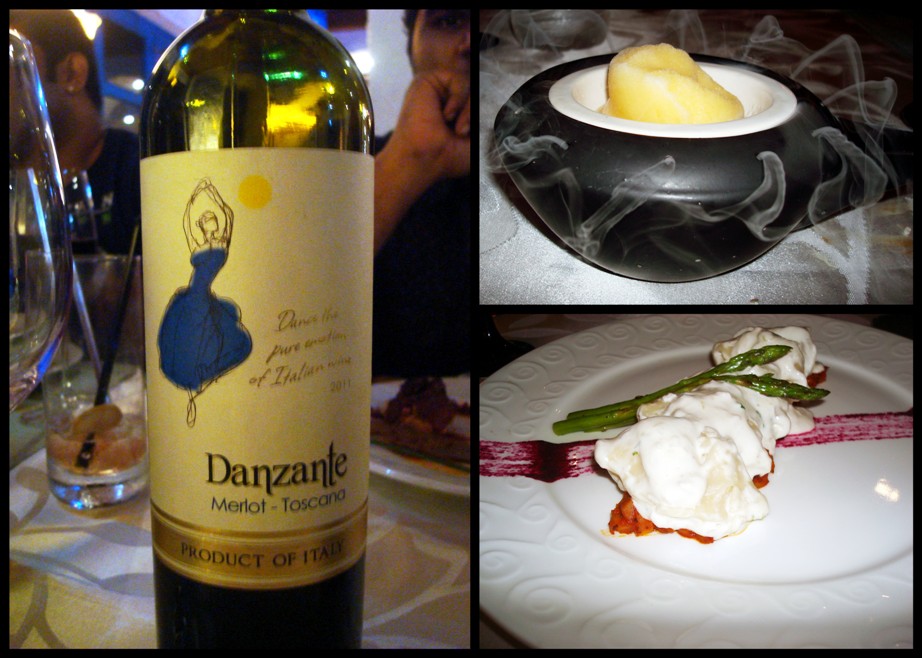 And then there
was sudden silence. The waiters brought out trays with small dishes that had
smoke floating everywhere. We were all curious and like little children sat
there zapped and in wonder. These were palate cleansers- lemon sorbet. Once
again, this is used to not only give the palate a break from the familiar
flavours, but also to buy time for the chef to prepare the main dishes. It was
delightful, so refreshing.

For the
main dishes, the vegetarians were served the Aushak [pronounced similar to “Oh shuck”],Homemade leek ravioli sautéed mushroom and fennel. It was so light and creamy. Loved it. For the meat eaters, they had a  Pollo al chilindrón (Corn fed chicken with sweet paprika, red pepper, tomato), which they devoured with delight. 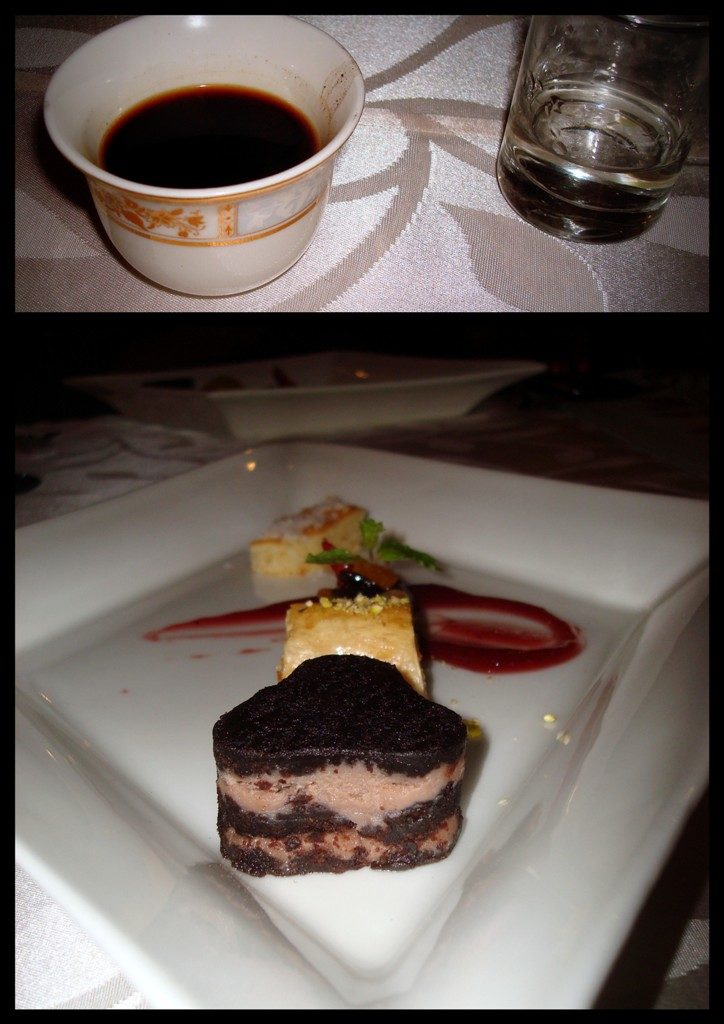 And then came the part of the meal we look forward to, Desserts. We were in for a treat, a plate with various Desserts arrived on the table. There was a piece of Baklava, a chocolate tart, divine fig slice and an Almond cake. We were also asked if we would like to try the Greek drink called “Ouzo“. We nodded yes, curious to try this drink. I had heard of it and an uncle has also mentioned trying the same during his travel. A small shot glass with clear looking liquid was placed in front of us and we were told it is typically had with desserts, to break the sweetness. A tiny sip revealed it was strong in flavour and quite a treat for the taste buds. Made with Star anise, it was strong, sweet and strong.. I know I said it twice, that is how strong it was. 🙂 Tequila felt like water after gulping down the shot.  Subsequently, to wind up the meal, we also went ahead and tasted the Turkish Coffee sans sugar [even though we were warned it would be quite bitter].