We met on Friday and during the course of the conversation my friend Ar mentioned this temple in Surutapalli and how it was very famous. I hadn’t even heard of the place, leave alone the temple and so when she said “am thinking i”ll ask the husband and maybe we can do a trip there on Sunday” I shamelessly piled on and said I would like to come as well. 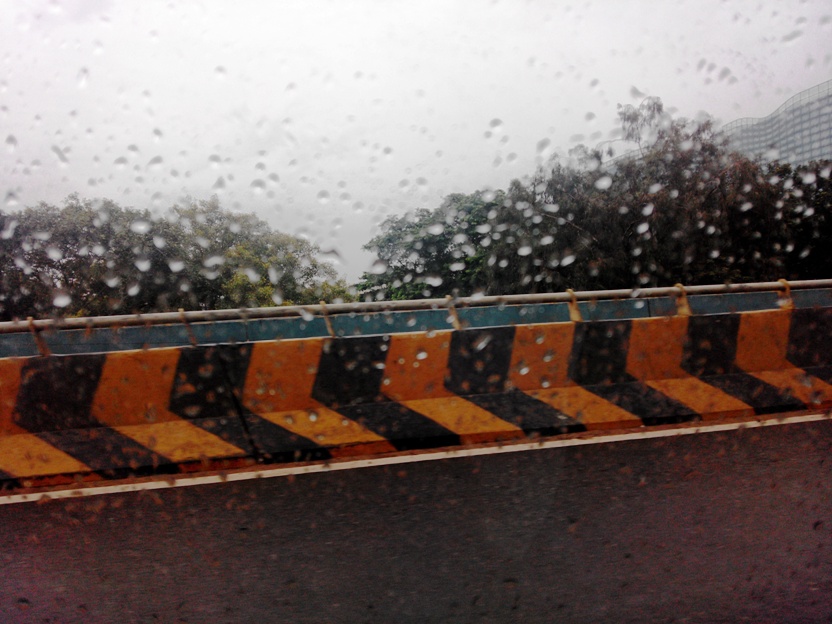 Saturday night we met for dinner and that is when she announced “so tomorrow morning we will leave around 7am and go to the temple. They dropped me home and were back next morning [it did not strike us the previous night, I could have grabbed a dress and gone with them, stayed over and scooted to the temple from their home, would have saved about half an hour and some fuel].
Anyways, so there we were on the road getting out of the city when Ar’s husband said we should stop for breakfast. We stopped at Vasantha Bhavan Express and had breakfast before getting back on the road. With our google maps on and gentle drizzle for company we rode on. There was nothing but lush greenery allong the way and what a sight it was. Infact we even laughed about how crazy it would be to just give up city life and move here, do a bit of farming and settle down. We wondered if it was indeed possible or we would go bonkers. 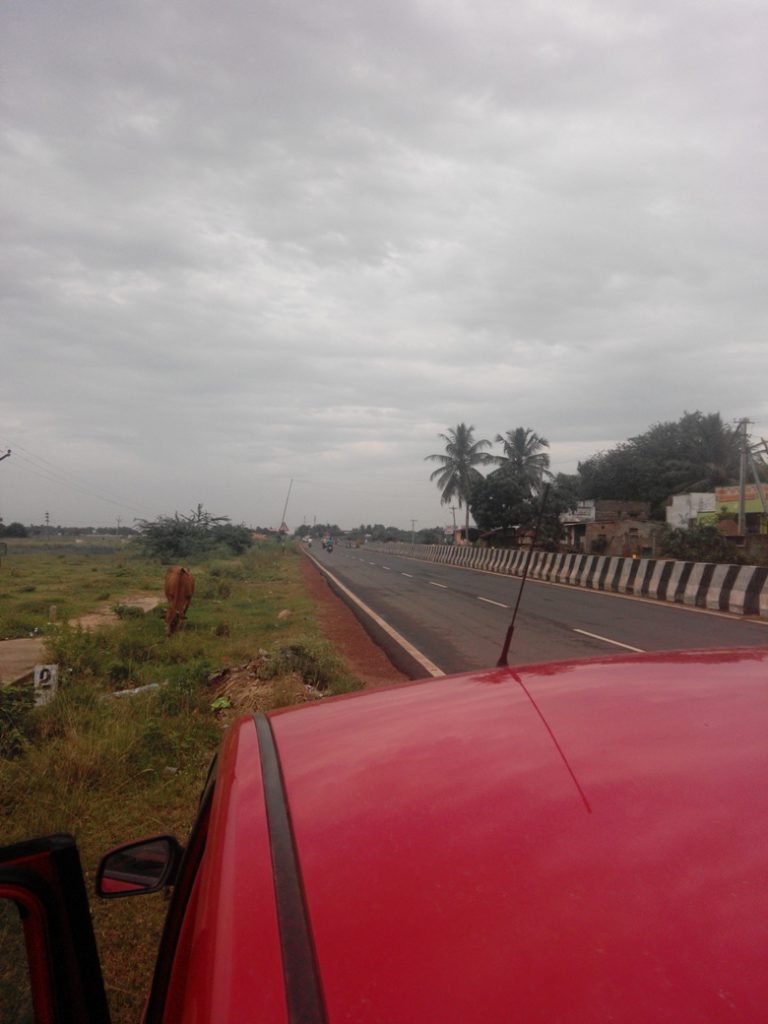 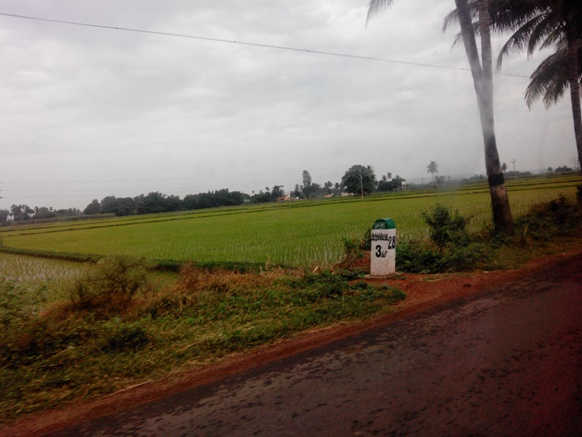 Within minutes we had reached Thiruvallur and then saw the board saying “Uthukottai”. We had done about 40 odd kms then, and knew we had another 20 kms to go before we saw the temple. The temple is located in Tamil Nadu- Andhra border, in Chittoor District. What is famous in this temple? It is the only temple where Lord Shiva is lying down. He is called Pallikondeswarar because of his sleeping position.
We picked up an Archana thattu and entered the temple, the 1st shrine belonging to the Goddess Maragadamba [Goddess Parvati]. The priest told us that this is one of a kind temple where we visit the Goddess first before saying our prayers to the Lord. Infact, Pallikondeeshwarar is in a seperate temple to the right of this one.
The garbha griha is guarded by Lord Kubera (God of wealth) with his consort Sanganidhi on left side and with his another consort Padumanidhi on the right side. The goddess inside the main shrine is sitting with Kamadhenu on one side and Karpa Viruksham on the other side. Apart from these, there are other Gods – Varasidhi Vinayaka,   Sri Venugopala Swami,Jawahar moorthy[ people who are unwell come here and offer prayers for good health], Valmiki muni, Kasi Vishwanathan with Visalakshi and others present within the inner praharam. We also saw Dakshinamoorthy with his wife Gowri [ unmarried people, those seeking children, prosperity in business pray to this lord every thursday for solution] on the outer wall of the main shrine. When you come around the Goddess’ shrine, there is also the Indra’s elephant Airavata sitting beside the shrine. There is also the Ekapadha Trimurthi (one foot and three forms) of Brahma, Vishnu and Siva with their Divine vehicles, the Swan, Garuda and Nandi, and Purna Pushkala Sametha Sastha here. 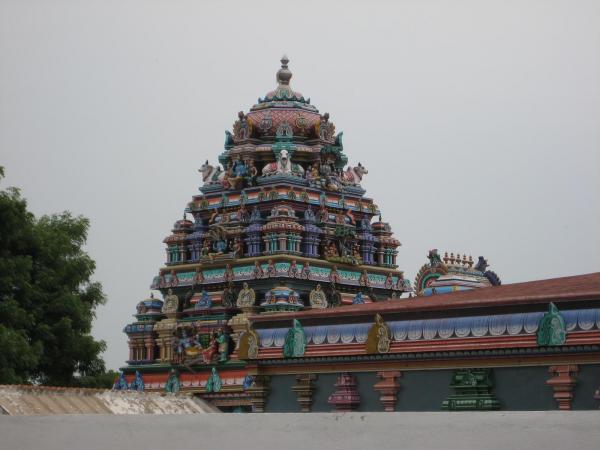 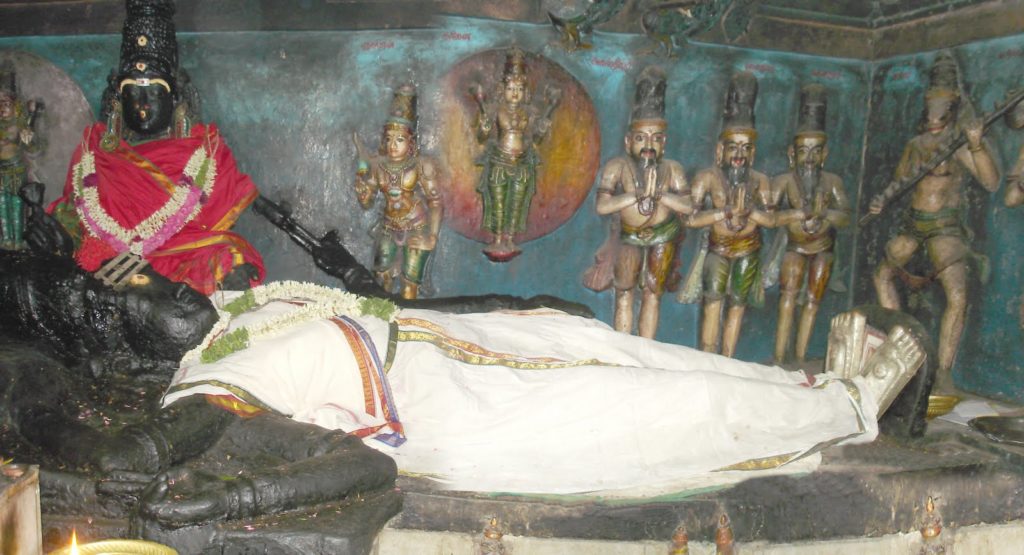 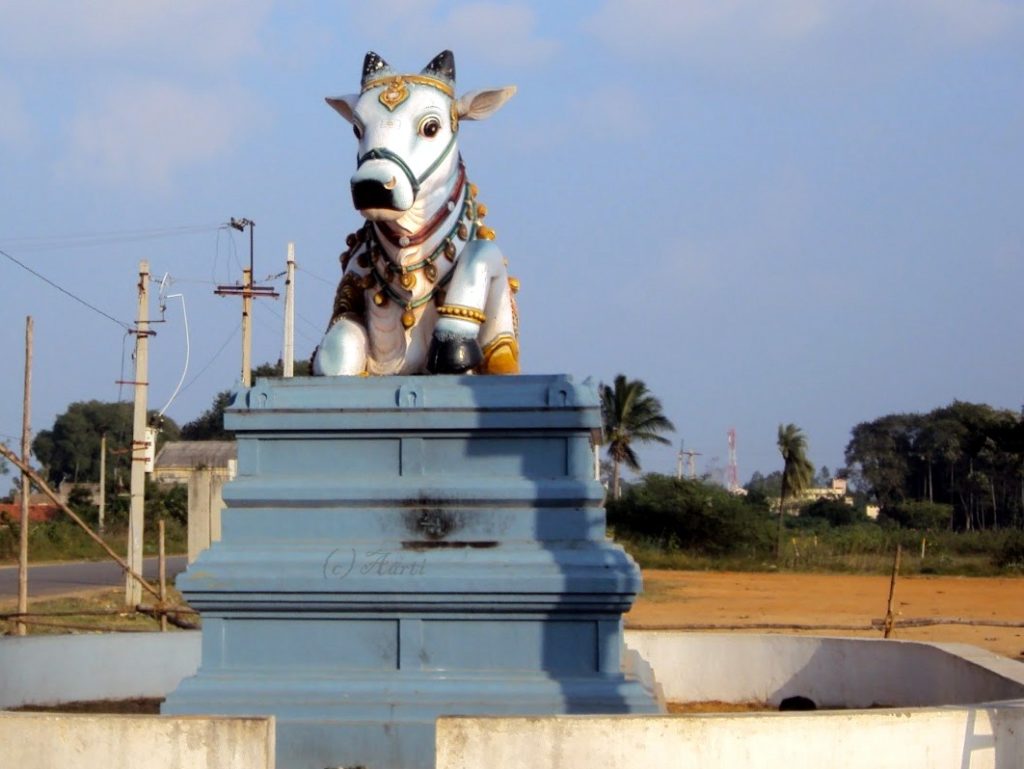 History has it that when Indra lost his kingdom and discovered that he can regain what he lost by consuming the Divine nectar a war broke out between the devas and asuras to obtain this very nectar. The two parties began churning the ocean using  the mountain  Mandramalai and Vasuki, the snake as the rope.  While they continued, Vasuki the snake began to spew poison. Lord Siva came and he gulped down the poison. This is how his throat became blue and he got the name “Neelakandan” ( neela-blue colour, kandam-throat). On seeing this, Goddess Parvati rushed and caught hold of his neck so the poison would not spread to his entire body. Shiva then became drowsy and fell asleep on Parvathi’s lap. The place where he is said to have done this is called Surutapalli. And this is the only temple in the entire country where we find Lord Shiva in this position.
Narada meanwhile being his meddlesom self spread news of this to all, and that is how the Devas, Vishnu, Brahma, and the Saptarishis came to see Lord Shiva. Nandi stood guard and prevernted them from entering the temple and so is considered important in this temple. That particular day when all the Devas, Brahma, Vishnu, Narada and Saptarishis came to see Lord Shiva was a Krishnapaksha Trayodasi. This is what we refer to as Mahapradosham day.  The nandi near the main shrine is infact called the Pradhosham Nandi and special puja is offered during Pradosham time.
We were done with our Darshan, sat down for a few minutes and bid goodbye to the Lord and made our way back to the car. I noticed there was a wedding hall at the other end of the campus and there were 2 young couples standing near the entrance, probably waiting for a bus to take them home!! The girl looked very young, we wondered if it was child marriage. That is when I spotted the other Nandi outside.