And what a glorious morning it was. We woke up to see the gentle drizze through the window, the spotted deer grazing in the park nearby and pigeons all over the place, probably looking for shelter from the rain. We decided to go explore a few places near the Hawa mahal- maybe the City Palace and Janta Mantar.
We hailed an auto and reached the entrance within 10mis and noticed a small queue already there. We waited near the entrance for the gates to open and then were told that we had to go around the corner to pick up tickets! D’oh! Hoping the gentle drizzle did not transform into a crazy shower, we went ahead bought the tickets and entered the complex. I have read about Jantar Mantar and knew it was all about science, but was not prepared for the massive interesting structures scattered through the space.

The 1st plaque gave us a sneak peek into the story behind the name. The name is derived from jantar  which meant “instrument” and mantar  was referring to the “calculations”. And so, Jantar Mantar literally translates to  ‘calculation instrument’.
As we wandered through the vast open space, with the gentle drizzle constantly falling on our heads, we were feeling high and chirpy. The weather was beautiful, the place was majestic and overlooking the city palace. 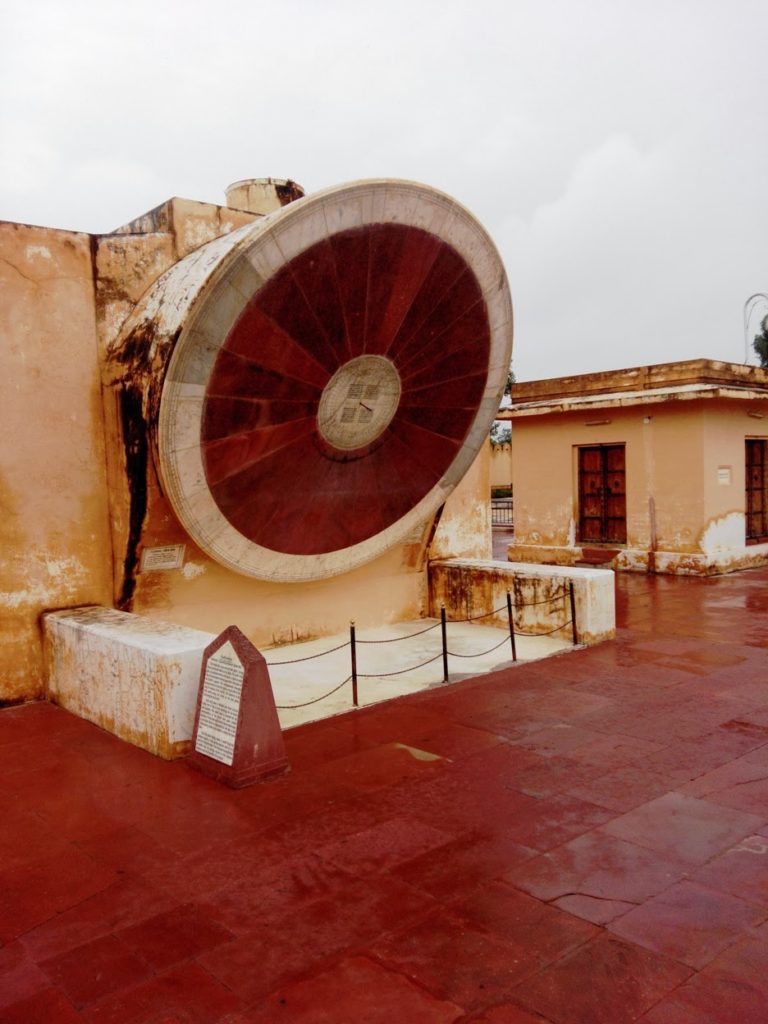 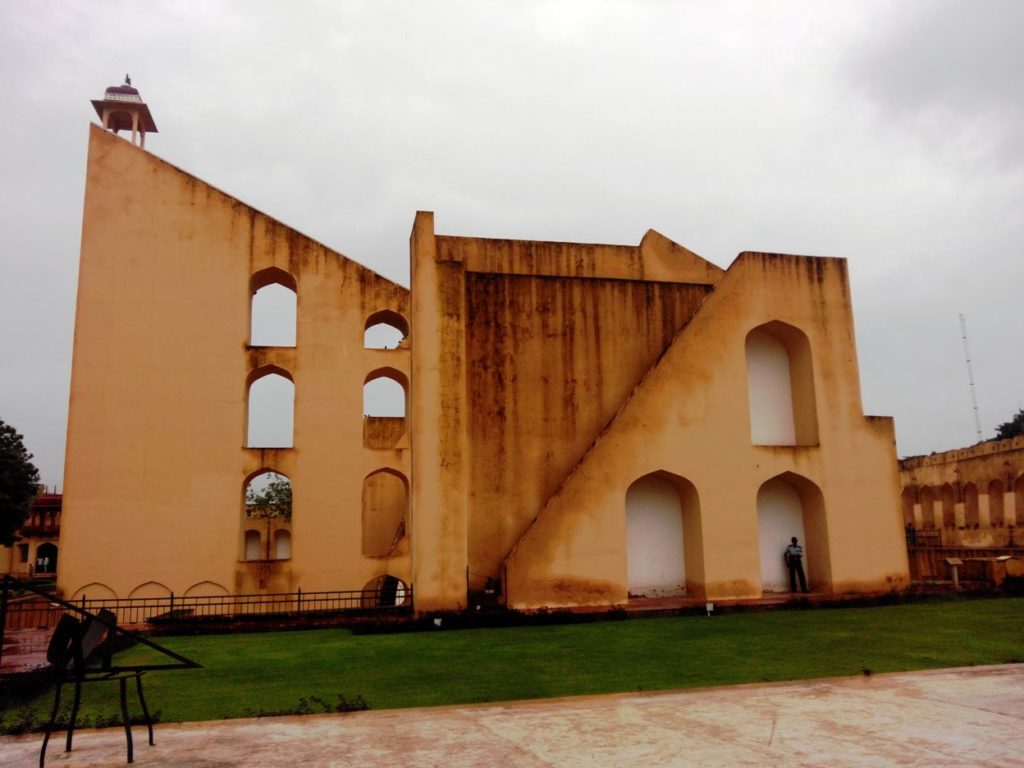 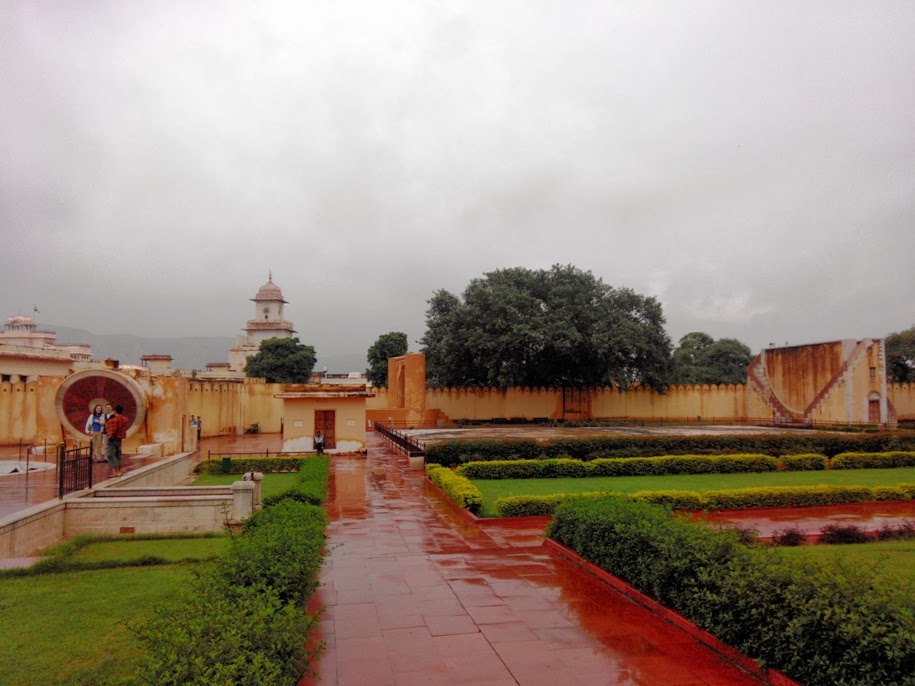 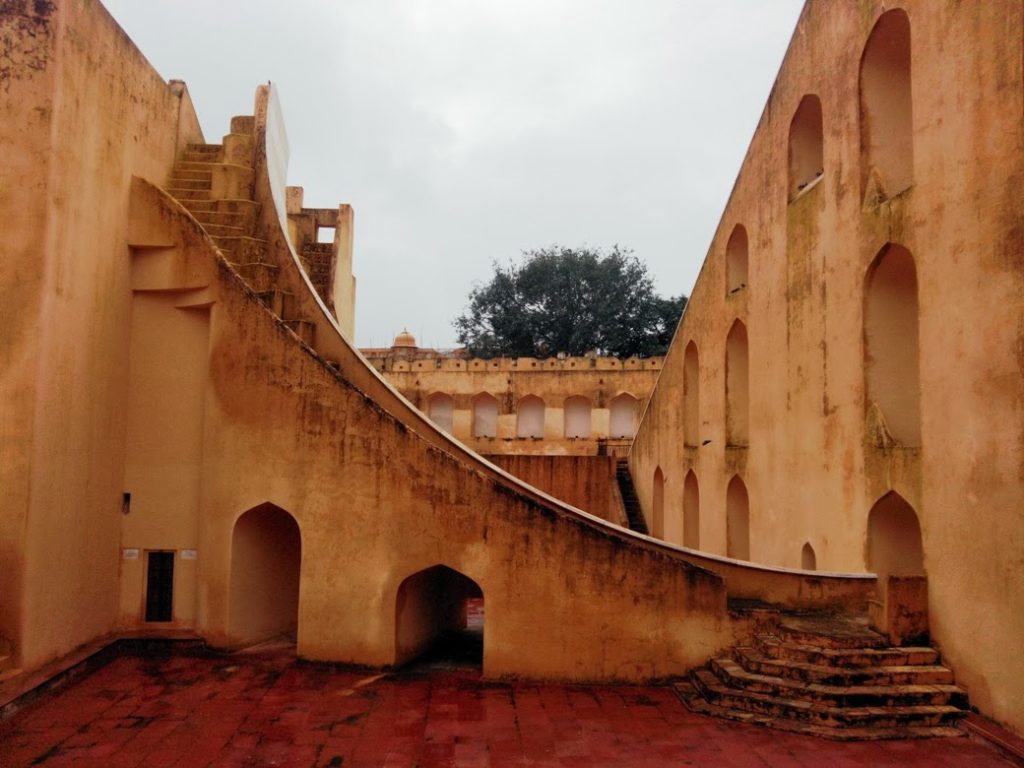 A guide was taking a group of spaniards giving them information in Spanish. I stood fascinated, trying to catch the words and see if I could remember what I had learnt.
The previous day I had picked up a book about the places to see in Jaipur which had a bit of information about Jantar Mantar as well. It said Maharaja Jai Singh II, the king who founded the ‘pink city’ was a great scholar and an avid astrologer. He had studied philosophy, architecture,astrology and religion in various schools and was very familiar with universal mathematical concepts -Euclid’s Clements, Ptolemy’s Syntaxes and the Master works of Aryabhatta.
In 1718 he decided to build an observatory which drove him to study astronomy. He then went on to build five different conservatories across North India. But, the ‘Jantar Mantar’ at Jaipur is the biggest one of them all and it houses several instruments that offer precise measurements of time, the azimuth, declination of the sun and the positions of constellations, along with several other astronomical phenomena.
The observatory consists of 14 geometric devices that are used to measure time, track the constellations and, observe the orbits around the sun. Popular structures within the Jantar Mantar are the ‘Samrat Yantra’ (the world’s largest sundial), the ‘Jaiprakash Yantra’ and the ‘Hindu Chhatri’..  We were not too big on science and dint really understand much of what we saw, but we did enjoy the leisurely walk around the place…
For more beautiful skies, visit Skywatch Friday