Kalady- The birthplace of Adi Sankaracharya

It was my friend’s birthday and I had decided to lane there as a surprise. Her husband knew of my plans, but she did not. That eventful morning I landed in Kochi, it was pouring. I reached the entry gate and waited for my friend’s husband to come pick me up [ navy area, so he had to come with a pass to allow me entry]. There I stood nearly drenched with my bags as he pulled in near the small passage. Hopped into the car and got a quick update that my friend was fairly mad and pissed off with him. Why? She had wanted to visit Kalady temple that morning but he kept putting it off saying he shall take them that afternoon. She had huffed off to the shower while he left for “work” aka to pick me up.

I got home, was greeted by their kids who upon seeing me began screeching with excitement. Took all my might to get them calmed down. The little one was unable to zip her lips, she went running screaming “ma, look who’s here, look who has come.. come out fast…”.. hahaha… It was nearly half an hour before my friend stepped out of the room, all dressed up and muttering under her breath about how her husband couldn’t fulfil her wish even on this special day. She turned into the living room, saw me and stood still zapped. Phew!!What a memorable moment that was.. 🙂 Once she was convinced I was really there, she couldnt stop screeching, told everyone who called about my surprise visit and then we got to making a quick lunch.

Around 2pm, we were all piled into the car and on our way to Kalady, a place I had been wanting to visit forever but yet to. My grandparents, mom dad, uncle etc had all visited the place. And finally, it was happening. Kalady incidentally is just about 6kms from Nedumbassery Airport and the nearest station is 10kms away-Angamali railway station. Infact, we had to cross the airport and go down the road to reach Kalady. 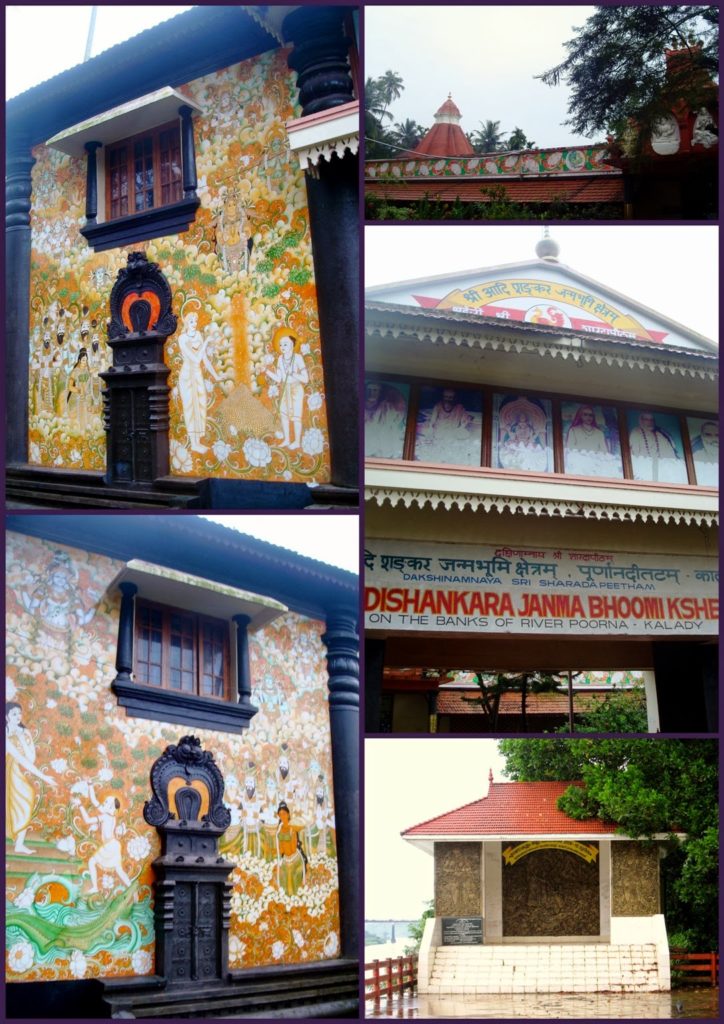 It was a fairly small village town that was nearly silent when wee reached there. We pulled into the parking lot near the temple and made our way to the temple. I noticed there were 2 temple complexes, one straight ahead and other on the right side. Friend told me the way to the river was between the two. Apparently there were steps leading to the river from the temple, but it had been sealed shut few years ago.

We had to cross a small bridge of sorts to get into the temple, in the pond below were quite a few fish and turtles that had the kids excited. There was one shrine dedicated to Adi Shankaracharya as Dakshinamoorthi and the other is dedicated to Goddess Sharada. the temple is maintained by the Sringeri Mutt. 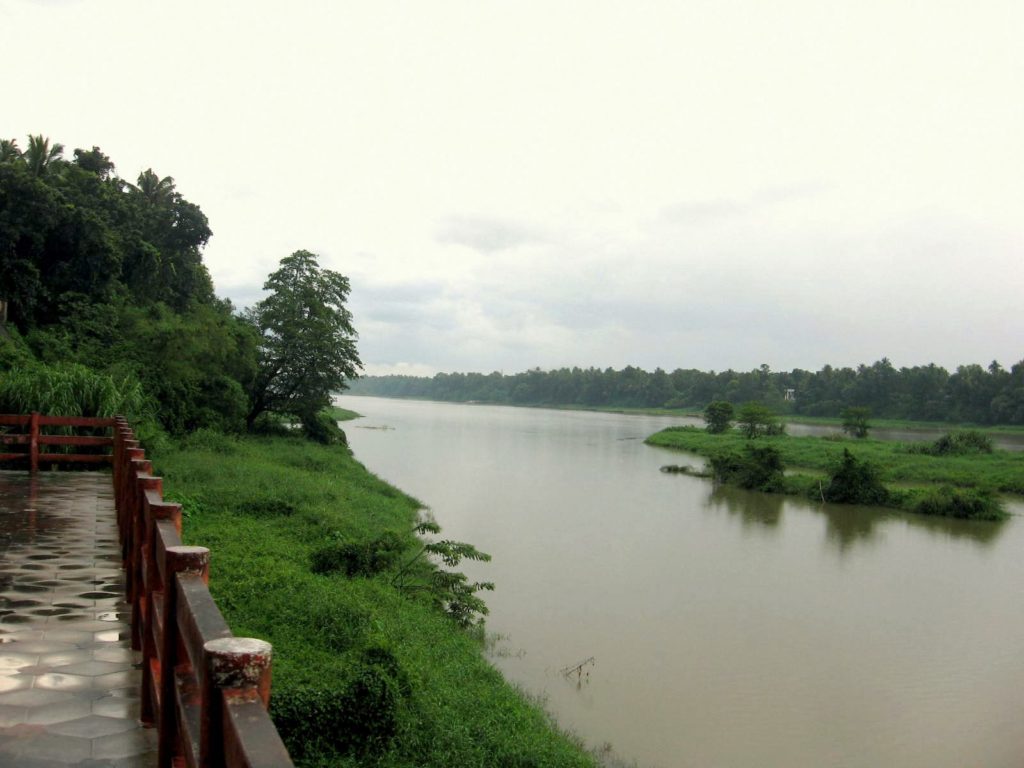 On the left hand side, near the temple entrance is a black pole, which is said to be the exact place where Adi Sankaracharya was born. There is also another spot called “Brindavan”, where Shankaracharya’s mother Aryamba was cremated. There is a light that burns day and night here in the lamp within the box.

The river here is referred to the “Crocodile Ghat”. This is the place where the young Shankaracharya once got caught by a crocodile. Legend has it that his mother was dead against his taking Sanyasa and so went into the river and refusedd to come out till she agreed. This is when a crocodile got hold of him and would not let go. Once the mother gave him permission to take up Sanyas, the crocodile let go of his leg.   There is also a large hall in the temple where homams and small functions are held where the ceiling is lined with the entire story of Adi shankaracharya in image format. The paint was wearing off, letters fading away, we wished someone would maintain this better. 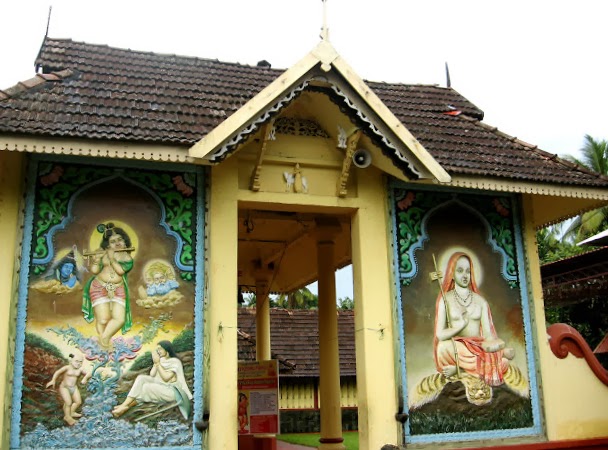 As you walk to land from the river, on the left you will see the Shri Krishna temple, the family temple. Built in true Kerala style, this temple was beautiful. But because of the rains, we beat a hasty retreat to the car, had a quick hot cup of tea and headed back on the road towards Kochi.

Legendary beginnings [Source: Wikipedia]
Legend holds that one day, the widowed mother of Little Sankara, Aryamba, fainted after walking three kilometers for her daily bath in the Periyar then known as Purna river. Feeling helpless, Little Sankara prayed to Lord Krishna. The tears of the child moved Krishna, who blessed him thus: “the river will flow where your little feet marks (കാലടി വരയുന്നിട്ത്തു നദി ഗതി ആവും). The Purna river took its new course in the place marked by the little boy’s feet. That place came to be called Kalady.
The Purna river began flowing through Little Sankara’s home garden. Sankara then installed Lord Krishna into the present temple, and marked the occasion by reciting his famous Ätchutha Ashtakam.
Thus ‘Kalady’ signifies the love of an innocent child for his beloved mother and the blessings of Lord Krishna[citation needed].