About a week ago, sometime during the day a friend messaged asking if I would like to come with her and her boyfriend to a temple near Gingee. I said “sure why not. Is anyone else coming?” She replied saying one of her other friends was also coming along. Glad that I was not going to be a 3rd wheel I confirmed my presence.
Saturday evening we met for a show, and subsequently did dinner as well. That is when she told me they had booked a cab that would come to my place around 6 am, she & her boyfriend would land there by then. I was up and ready by 5.45, he came around 5.50, the cab came at 6 and she reached within minutes. We were off and on the road when she mentioned her other friend wasn’t coming as her son was unwell.. [mental voice- oh no, dreaded 3rd wheel situation, hopefully not very awkward] We stopped for breakfast at the Motel Highway Inn, had hot idli, dosa and coffee and were on the road within an hour. We reached the temple around 9, looked around making sure there wasn’t too much of a crowd [ am kinda allergic to crowds]. The temple gopuram was a bright yellow and there were women and men dressed in various shades of yellow and red. We were at the Angala amman temple in Mel Malayanur.
The Angala Parameswari Temple [another name for the same temple] is located at Mel malayanur, about 32 km from Gingee in Viluppuram District. 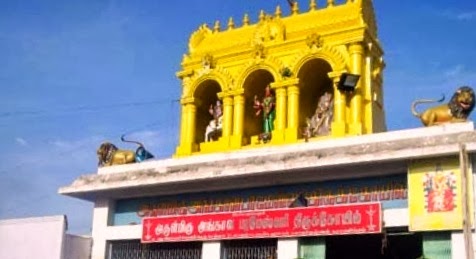 The main deity worshipped in this temple is the “Sembadavars”. As we entered the temple sanctum, the 1st section housed an ancient snake pit. You go around it to see the main Deity. This Goddess is known to be very powerful, anything you wish for you get!
While we headed out of the main sanctum doing pradakshanam, I noticed a ritual of sorts going on in the outer ring. There was a man who looked like a priest throwing vermilion at a girl’s face and saying something which she repeated. I was told people come here when they are possessed to chase away demons and so on.  And the temple is crowded to the brim on new moon day, cos that is a day when such incidents are way too many. I dont really believe in these, but it was interesting to witness the process.
And with that we were out and back to Chennai [we had a blast through the drive and nope, I did not even for a second feel like the 3rd wheel].
Apart from the crowd and the temple itself, I was once again appalled by the attitude of the people who worked here. The lady manning the Snake sanctum looked at me and instantly said “You should empty your wallets to God before giving me kum-kum and a lemon”, and as we made our way to the main sanctum behind this one, there were 2 priests allowing people to go inside near the Deity for a price. A couple ahead of us paid Rs 10, while we were told “pay Rs100 and you can go inside”… Wth!! I know it is a temple and all, but such discrimination!! To top it off, they even say put the money in the plate and not in the Hundi box [ya right, don’t we know where the money from the plate goes] Quite sad seeing such behaviour… sigh…
Well, I did pray for all and here’s hoping the year ahead is great!
To know more about this temple, visit this site