The movie opens with a bunch of people screaming and trying to open a door in a Chawl in mumbai, and a man comes up the staircase and is told it is his daughter who did the prank. He calls her aside, doesnt chide or scold her but tells her to open the door and finish what she started and they high 5. On the other hand there is another family, the dad is a cop and his 2nd son Nikhil [Siddharth Malhotra] is a naughty kid- who they lock in a room and go to watch a movie, but he doesnt stay locked in, he is out and watching the movie from the other side of the screen in no time. 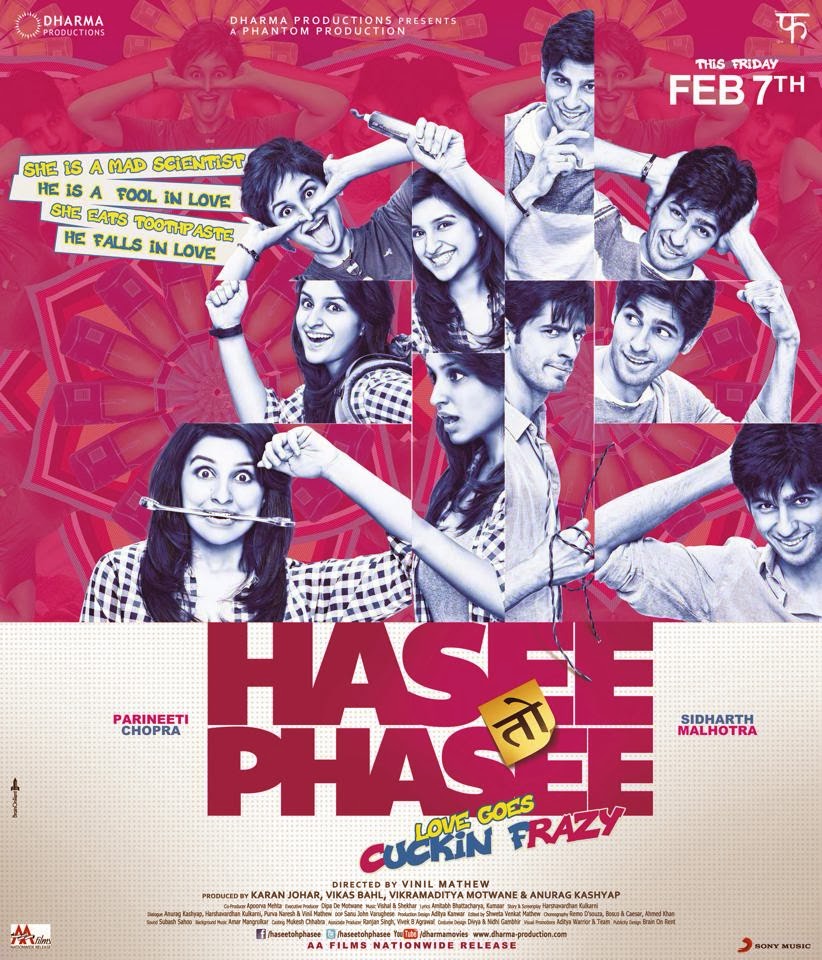 Hasee Toh Phasee is quite the entertainer, it was such a feel good movie that we walked out of the theater smiling, recollecting the quirky moments.  Coming back to the movie, the 1st time Nikhil and Meetha [Parineeti Chopra] meet is when Nikhil is passing by a house when he spots a tomboyish girl trying to escape through the barbed wires. He helps her escape and as she is fleeing the place, she says “Socho, mein idea hoti aur tum technology, humari patang kya mast udti na?”

Now, the main plot of the movie is not a new one, it is about a guy and girl all set to get married, when the guy falls in love with another girl in the process only to go after her on his wedding day. But the way it has been taken, the approach, the characters – that is what sets this movie apart.
Meetha is a daddy’s girl [daddy’s role played by Manoj Joshi], a girl who runs away because she dint get what she wanted from her dad. Her uncle is constantly yelling at her [she has short hair, wears T-shirt and trousers, is spoilt, too independent, etc etc]. She hails from a traditional Gujarati family that doesnt understand her, nor do they encourage her brilliance.  She disappears on the eve of her oldest sister’s marriage only to reappear after 7 years for her 2nd sister’s wedding. Infact, Karishma (Adah Sharma), her sister invites her for the wedding  but introduces her as a guest to Nikhil. It is only later that he discovers the relation, the background and Meetha as a person.

The story is all about Nikhil and Karishma’s wedding, the families preparing for it, Nikhil perpetually in need o money, Karishma constantly angry with him, and the rest of the family adding to the chaos in their own little way. Nikhil and Karishma have had a crazy relationship, she has threatened to break it off numerous times, but he holds on to the relationship saying “I know her, I love her, who is to say the next girl will be the perfect one?”

Meetha is an oddball, she has the wildest twitches and habits, she speaks a million words a second, she drinks gallons of water and popped a dozen pills periodically. Nikhil ends up picking her up, finding her accomodation, retrieving her from the dump and putting her up at his house, driving her around, and various other adventures. During these times he learns about her, realises she is not a bad cookie, but just a misunderstood cookie. And as they discover each other, romance blossoms. On the evening of a family gathering, Meetha tags along with Nikhil for she wants to meet her dad [ hasnt seen him in 7yrs] but is told he is angry and might have another heart attack, and so he whisks her away. But then the car breaks down, and she instantly solves the issue. That evening, she shares her entire life story with Nikhil, showing off the ball that bounces like crazy, that could one day provide power for an entire apartment complex.

Her stares, quirks, sharp dialogues, her twinkling eyes, sudden bursts of chinese, tooth paste eating, chocolate stealing habits are just amazing. Infact, she is the highlight of the movie and Parineeti has acted brilliantly, essaying the role to the dot.  Nikhil is so drawn to her that by the end of the movie he is all set to help her find the money she needs even though it is not the acceptable path. And as expected, the movie does end with a happy ending.

It is a must watch for anyone who needs a good laugh, or wants to hold on to the belief that love does exist. Such a rib tickling, sweet, endearing, feel good, warm fuzzy movie that was.  And then ofcourse, Siddharth looks good, so does Parineeti [there is also certain cuteness in her]


Overal rating – 4.5/5 [ the .5 less because some scenes I felt were unnecessary, just as some characters were…]