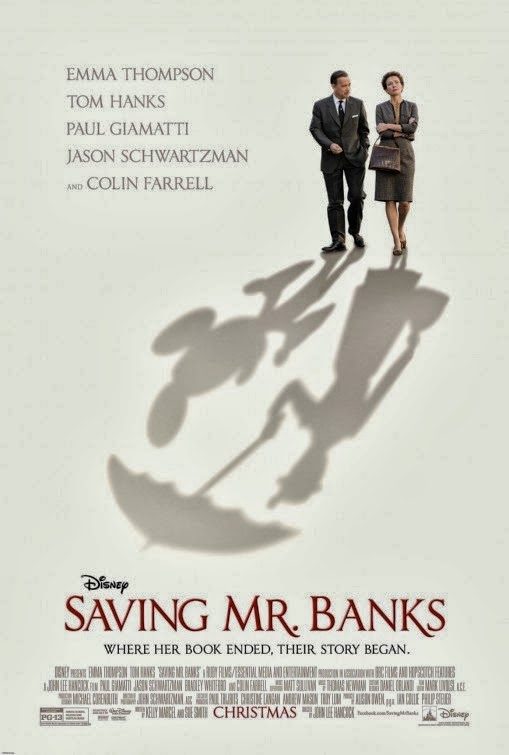 Direction: John Lee Hancock
Inspired by true events, this movie is almost like a behind the scenes look into how Walt Disney (Tom Hanks) managed to  convince the author P.L. Travers [Played by Emma Thompson] to visit USA and convert her book Mary Poppins into a feature film.

In short, the movie “supercalifragilisticexpialidocious”… haha.. I’ve always wanted to use that word in a sentence and here is my chance! I watched Mary Poppins movie as a little girl with a bunch of cousins and we ran around singing the songs from it “Spoonful of sugar” and “supercalifragilisticexpialidocious”… And so to watch a movie that shows how the movie got made was quite an exciting moment.

Was at a friend’s house and she showed a bunch of DVDs she had bought recently, and this is what both of  us picked. And what a right choice that was. The 2hours went by so fast, we went through several emotions through the movie- happy, excited, appaled, sentimental and finally a big fat grin on our face as the credits rolled by.

The movie begins with Pamela Travers deciding to fly to America to meet with Walt Disney who hopes to convince her that they should convert her book into a movie [which is also a pomise he made his daughters]. But Pamela is not an easy woman to work with as you discover during the movie.  She has an opinion about everything, and quite the stiff upper lip as well. When people address her Pamela, she corrects them [every single time] that she is to be called “Mrs Travers”.

There is another story that runs in parallel, Pamela’s childhood years set in 1901 in the Australian outback…She dotes on her father [Colin Farell] who loses his job in the Bank and decides to move to another town [moves his family on foot bags children and all]. But over years, he loses all his jobs and takes to drinking eventually succumbing. It is her mom [Ruth Wilson] who brings the children up single handedly. All that she went through as a child, the times spent with her dad gives us a sneak peek into her life and why she is the way she is. Infact, as the movie wears on, you discover the Mary Poppins story is her very own story. It is brilliant watching the scenes where Walt Disney tries to work his charm  on her, her small interactions with her driver and the way she finally melts.

This is a movie that is good for people across ages, that will leave you feeling all warm and fuzzy by the end of it.