It is nearly monsoon up north and that is what brought on this post.

It was Aug 2013 and I was doing some reading about the places to visit in Jaipur when I stumbled upon a bit of information. It actually had me all excited and within minutes I shared the same with the friend who was travelling with me. The day we were landing in Jaipur was when Teej festival began. This is a festival that was celebrated across two days and was known to be grand and vibrant. The internet told me there would be music, procession, dancing, and the Goddess Parvathi would be brought in a palanquin.

The Teej festival happens as the monsoon begins in Rajasthan.  Dedicated to Goddess Parvati, this festival is all about reuniting her with her husband Lord Shiva. An elaborate process began near the palace grounds inside one of the lanes along the Hawa Mahal area. We were told it begins at 5 and to find a place to sit/stand to view the procession. Friend and I spent about an hour inside the campus where all were getting ready. There was one elephant standing there all decked up, with lions and deer painted around its eyes and legs. It looked very cute. And out of nowhere another herd of elephants marched in, much to my dismay. The mahoots got busy throwing a sheet and then few other adornments over these gentle giants. Alongside came a few camels and horses as well. In another corner I noticed there were a group of women dressed in finery in black colour, and a few men with music instruments in their hands. After spending some time watching, clicking and talking to the people around here, we finally made our way to the main road in search of a vantage point to view the procession in. We saw a few sitting on top, and asked the cop how to get there. He deliberated for a few minutes and then guided us up the steps. There were a row of chairs filled with Foreign tourists an their guides. We grabbed two seats and got comfortable waiting for the festivities to begin. Every now and then there would be a sudden bout of drizzles.

Within an hour, we spotted the Elephants coming out from the gates. They looked grand and beautiful. Following them came the dancers, there were few other performers, groups of men carrying a tall pole with a decorative piece atop balanced on one hand. Then finally came the palanquin holding the Goddess Parvathy. It had a beautiful red canopy and was pulled by a few men dressed in finery. Some looked up at us and posed for photographs, while others went along… 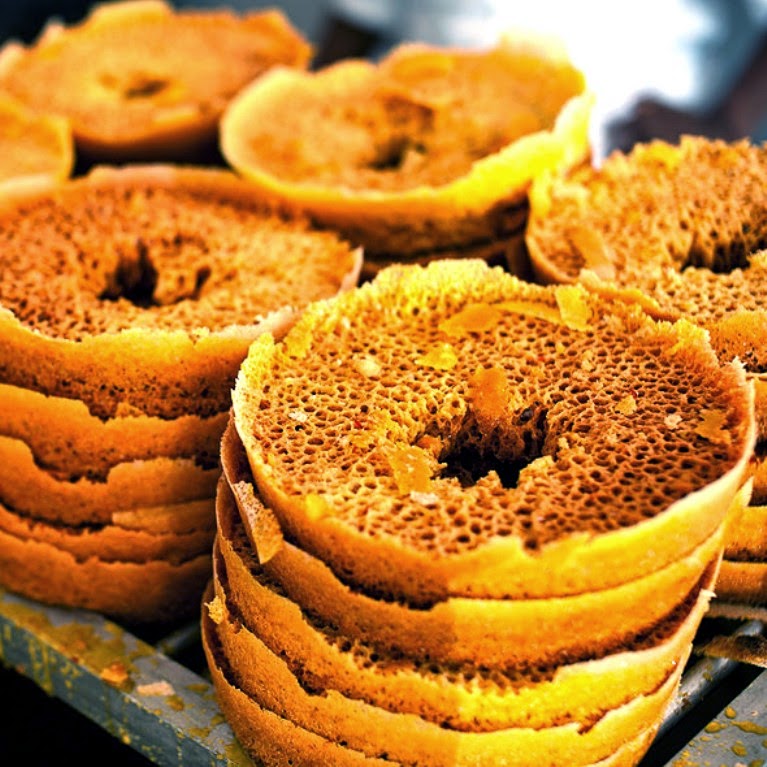 During this festival, married women all around pray to Lord Shiva and Parvathi blessing them for a long life together.  It is said that the Goddess Parvathi has been away from her husband for a long time and is finally going back. Any wish/prayer made on this day is known to come true!

The sweet stories along the lanes were filled with their traditional sweet Ghevar [made with oil & flour where the batter is poured through a hole in bottle cap and then sugar syrup is poured over it]. Clothe stores were showing off the beautiful lahariya sarees [ multi coloured with wave prints] and women all around were dressed in bright colours with bangles and mehndi on their hands.

The evening ended only after the palanquin turned around the corner down the road.