And so we had finally landed in Bangkok and made our way to the Hotel. After grabbing a quick bite in the Executive lounge and taking a tour of our cool room, we sat down to chalk out a plan for the day.

It was nearly 2pm, and so we thought we will do The Grand Palace, Wat Pho and Wat Arun that evening since all these were close to each other and Wat Arun shut the latest at 6.30pm.

We left the room around 3pm, and headed out to hail a cab from the streets. We asked quite a few cabs, but most wouldn’t come. And then one guy said ok but was charging 400Baht.

Being ignorant and eager, we hopped in and went over to The Grand Palace. Just as we got off the vehicle, a man in security uniform came over and told us the place was closed and only Thai locals were allowed. He then suggested we hail a Tuk tuk and go to Wat Arun. He proceeded to take us to a Tuk tuk waiting near the curb and the guy there quoted 250Baht. Now we had done enough research to know that Wat Pho and Wat Arun were close by. We asked if he would instead just drop us off at Wat Pho. He refused and asked us to get away from there. We walked on, and before we knew it we reached Wat Pho

The complex is huge and beautiful. We had never seen such intricate workmanship anywhere else and this just blew our minds away. The towering temple complexes,  the number of Buddha sculptures [more than 1000], the walk ways and then of course the majestic Reclining Buddha [160 ft long] leave you overwhelmed.. the entire place is spread across 8 hectares of land.

Wat Pho is a Buddhist temple in Phra Nakhon district in Bangkok. It is also known also as the Temple of the Reclining Buddha. But what not many know is that the official name of this temple is Wat Phra Chettuphon Wimon Mangkhlaram Ratchaworamahawihan [quite a mouthful right?]

While you do the rounds of the campus, there are quite a ew smaller shrines where people worship even today. The custom we noticed was to pick up a lotus, a candle, 2 incense sticks- light them up and say a prayer. Here in the temple there was a table with roof tiles with a form pasted on it. Just like in our part of the world we donate money in the temple, here you donate a roof tile. 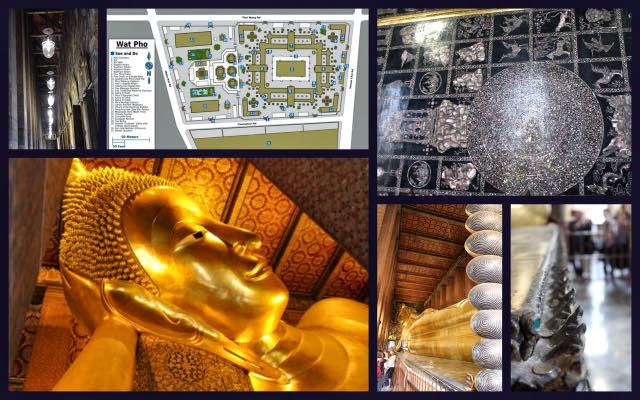 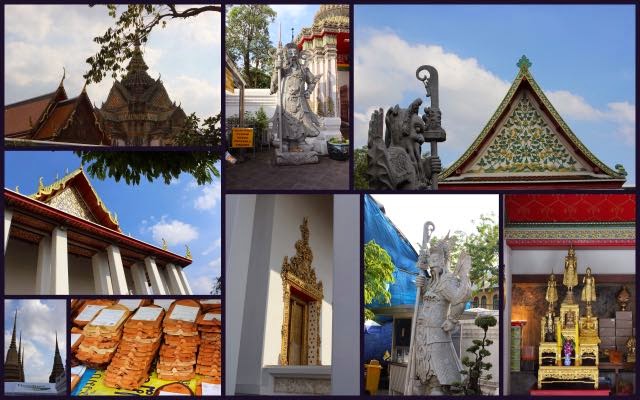 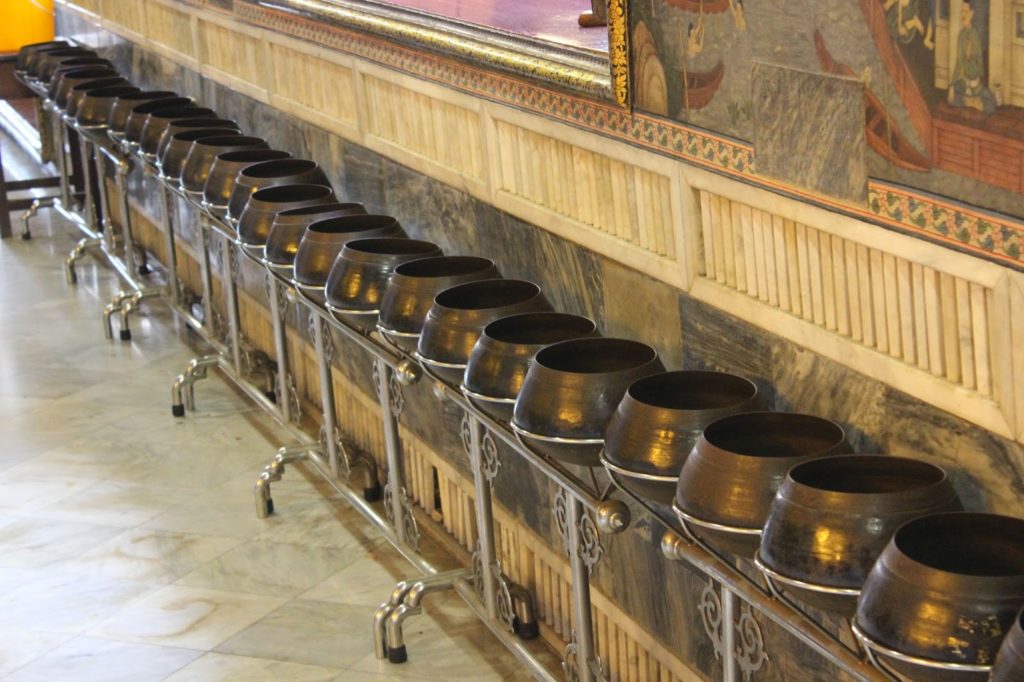 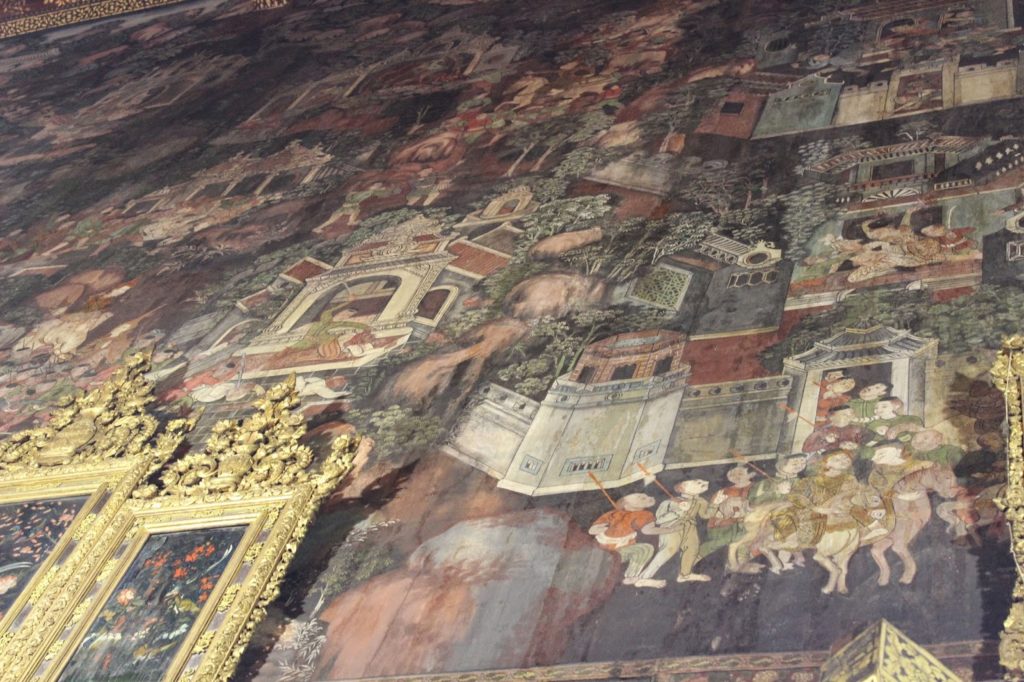 And now talking about the focal point of Wat Pho- the Reclining buddha, he is lying down and looks so divine, it had us grounded for a few minutes. 6m long and 15m high, this sculpture illustrates the passing of the Buddha into nirvana (ie the Buddha’s death). Made with plaster around a brick core and finished in gold leaf, the sole of his feet are studded with Mother-of-pearl inlay ornaments, displaying 108 different auspicious lák·sà·nà (characteristics of a Buddha).

All along the corridor of the temple are 108 bronze bowls indicating the 108 auspicious characters of Buddha. We spotted quite a few people drop coins in these bowls as it is believed to bring good fortune and the money donated is also used for the temples maintenance.

The sky was beautiful blue, with cool breeze keeping us company as we wandered around the complex. 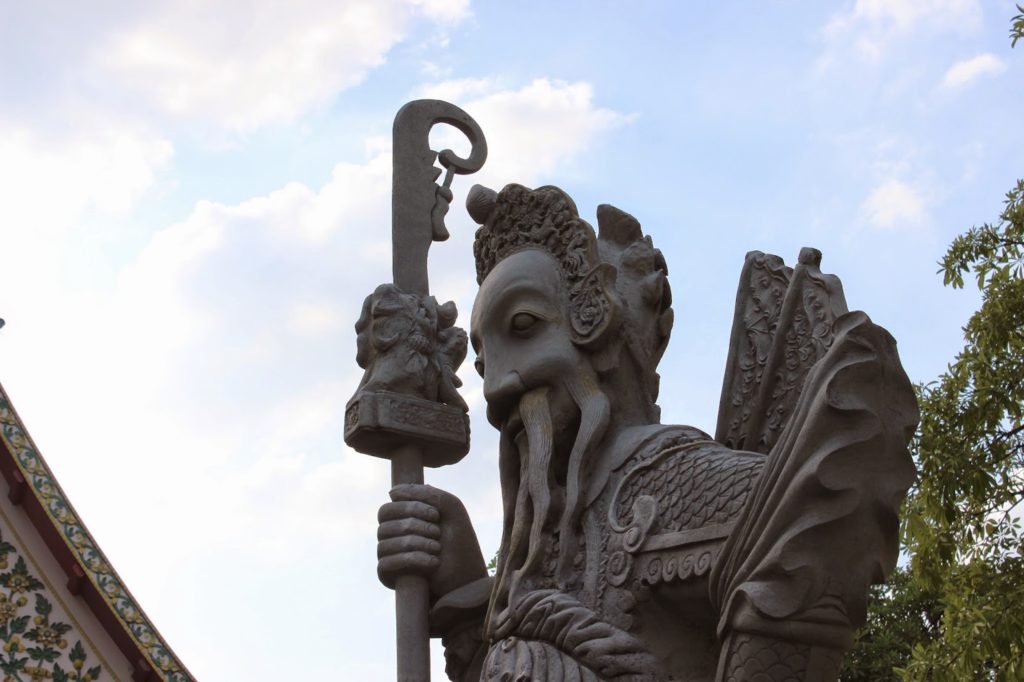 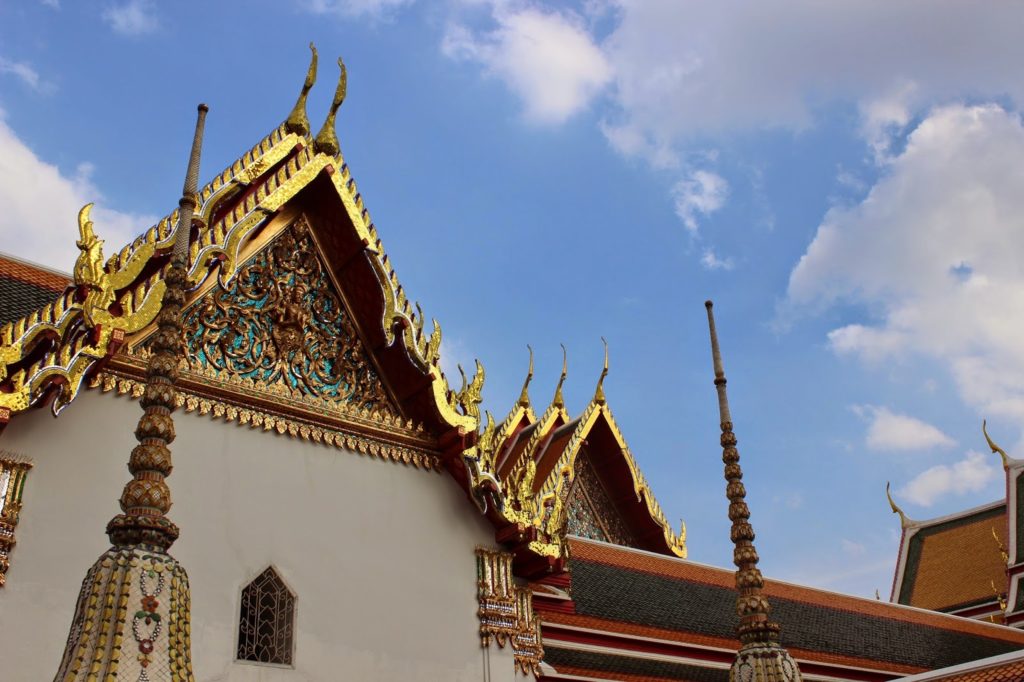 The one thing about the place that amazed me was the way people moved about. There were places where we had to leave our footwear in a stand. People came, removed, left them, walked in and walked out to pick up their footwear in peace. There was no chaos, no worry about “will my footwear be there or would someone have taken it away”…   The other thing I noticed was the temple was filled wit cats, all colours, shapes and sizes… They were  not scared of people, some almost invited visitors to come pet them, while others went about their work peaceful.

And then of course were the gazillion people clicking selfies – either wit hands stretched out or using a selfie stick. We spent a good two hours exploring the place and could spend another hour easily taking it all in.

It was time to get out across the road toward the ferry point..